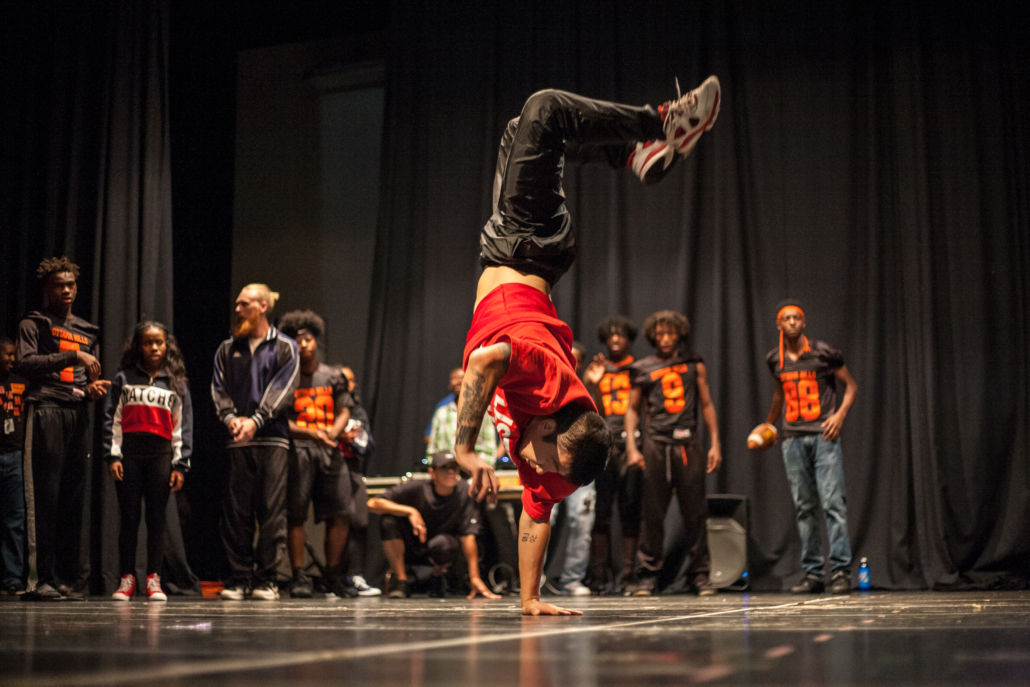 As part of the presentation, three students from All of the Above Hip Hop Academy (AOTA Academy) will be performing an original song about environmental justice. AOTA Academy is a Hip Hop mentoring program in Grand Rapids and Lansing, encouraging young people to engage in community and culture. Students will be putting on a show the day before the series, which they have curated and will host themselves.

Dr. Ali will be speaking on environmental justice issues solutions. Environmental justice, as defined on the EPA website, is “the fair treatment and meaningful involvement of all people regardless of race, color, national origin, or income, with respect to the development, implementation, and enforcement of environmental laws, regulations, and policies.”

He currently works as the Vice President for Environmental Justice, Climate and Community Revitalization at the The National Wildlife Federation. Before that, he worked for two years in a similar role at the Hip Hop Caucus. He had previously worked at the EPA for 24 years.

WMEAC got the opportunity to interview Dr. Ali over the phone, in anticipation for the event.

WMEAC: How did you first get involved in environmental justice?

Dr. Ali: I actually first got involved as a student, in a couple of different ways. One was conservation. I was really lucky to grow up and be able to spend a lot of time actually at forests and jungles, and all that kind of stuff. Just seeing all the natural beauty that was out there, but also seeing how some of it was being impacted by things like mining and other types of pollution.

Then when I got a little bit older, I started getting more deeply into social justice issues, and was really really blessed to meet some of the folks who were the early leaders of the environmental justice movement. They sort of adopted me, and I started working on the issues and have been doing it for a little while now.

WMEAC:  What advice do you have for young people who are passionate about it and want to get involved?

Dr. Ali: This is just such an incredible time. There are so many tools that are out there that people can communicate with, and actually capture both the impacts that are happening. [There are] also folks who are doing incredible work being able to capture the protest, and to mobilize folks to be able to get information around policy and legislation and helping. I see so many incredible young leaders who are framing it out, and also utilizing culture and using music and poetry and so many other things to be able to educate, motivate and to bring people closer together on winning on these issues. I can’t tell you how amazed I am, and thrilled, that so many young people are stepping out there and defining what the future’s going to look like.

WMEAC: What was your role in founding the EPA’s Office of Environmental Justice?

WMEAC: You made headlines when you resigned from the EPA in 2017. What ultimately led to your decision to resign?

I knew the result of that was going to be that more people are going gonna get sick, and unfortunately, more people are going to die: and I knew that I couldn’t be a part of that. Morally or spiritually it’s not something that I could be supportive of. I tried to stick around for a little while, and hoped they weren’t going to do those types of things. But when I saw that they were very serious about putting the crosshairs on these communities I knew that I needed to remove myself, and take the  skills I have to the outside to better be able to fight against that.

WMEAC: In your role at the Hip Hop Caucus, how do you see climate, environmental justice & community revitalization connecting with Hip Hop?

Dr. Ali: Oh without a doubt. I mean at the Hip Hop Caucus there are a couple of different ways. One is the “Respect My Vote” campaign. The caucus has been a part of getting about six hundred thousand young people, returning citizens, communities of color engaged in the civic process of voting, and realizing how that vote can translate into change you can translate into helping to protect your community, to translate into making sure the resources that are necessary make it to the community.

The second way is through working with those artists and entertainers who utilize their platform to help people to understand that they have power on some of the issues that are going on. I was recently at the NAACP image awards and Beyoncé was there. I remember when, after the hurricanes came through Houston, Beyoncé utilized her celebrity to bring attention to help people to understand that: yeah, climate change is real, and the floods that are coming because of these storms are impacting vulnerable communities. But she was also right there helping to pass out food and water. You see that there are a number of artists around the country — actually around the world — who are getting engaged on social justice issues, climate justice issues, and environmental justice issues. That’s powerful, and that’s why the two years that I spent at the caucus were so important in building those relationships and helping artists and entertainers to have a deeper understanding of some of these issues: and then them using their words and their God given blessings to be able to spread their message.

WMEAC: Can you tell me a little bit about the “Think 100%” podcast?

Dr. Ali: Oh yeah. “Think one hundred percent, the coolest show on climate change.” Reverend Yearwood and I pulled it together. We have the national radio show and the podcast. We were intentional on wanting to make sure that the voices that often are unheard and unseen had a platform, [like] young leaders. We’ve been really blessed because we have been ahead of the curve. We had the sunrise movement on before much of the country knew who the sunrise movement is: and now everybody knows, and rightly so, because of the Green New Deal. So we’re really cool with all of them.

We’ve had many of the people who are running for president on, we have the environmental justice leaders on, we’ve had cultural influencers on, a number of artists and other entertainers who have been on it. So it gives us a chance to make sure that those stories that people might not have ever heard about get told, and also to make the connections.

We also talk about the lack of diversity in many of the big green organizations and the climate movement, to put a spotlight on that, to say: if we’re serious about winning on climate change, then we have to make sure that we have a diverse movement that looks like and represents all the people in the country. We have to make sure that young leaders are playing a significant role in the change that has to happen. So we’ve just been blessed to have “Think 100 Percent,” and to be able to utilize it in a positive way.

WMEAC: Does your new role at the National Wildlife Federation connect with your role at the Hip Hop Caucus?

Dr. Ali: Oh yeah. No matter where I am, I’ll always be doing environmental justice and climate and revitalizing communities. I was really blessed when Collin O’Mara — one of the youngest [organization] presidents in the country — started to talk to me about wanting to make sure that NWF was a 21st century organization. What that meant is embracing diversity, embracing environmental justice and climate justice issues.

Most folks don’t know that NWF has 6 million members. So when you can get 6 million members focused on these additional issues, along with the great work that they’ve been doing in the conservation space around water issues and public land issues and a number of other issues, then that just helps us to have even more folks coming together and pushing to make real change happen. So for me, it’s just the next step in my evolution, in trying to pull together all these various pieces and all these different types of folks across the country. To help folks understand that we have a whole lot of similarities, and we have a whole lot of opportunity to actually win on climate and environmental justice.

WMEAC: You’ve often advocated for both elected officials and political candidates going to vulnerable communities and spending time there. Why do you think this is important?

Dr. Ali: Oh it’s really quite simple. If those folks who are running for office and who want your vote are not showing up in your communities, then they shouldn’t get your vote because there’s no way that they could ever advocate for you if they don’t know what’s really going on in your life and what’s going on in your communities. I often talk about Mrs. Ramirez and Mr. Johnson sitting down in their kitchens or on their back porches or front porches, and actually spending real time with people.

We’ve got way too many people who do drive-bys: they want to come by the community, take a picture and then you never see them again. That’s an outdated paradigm, that no one is going to support anymore. So I often say, and I believe it 100 percent, that I don’t care if you’re republican or democrat or independent: if you’re not spending real time in our communities, there’s no way you can advocate for us, and there’s no way that you could possibly create policy that is reflective of the needs of people on the ground.

WMEAC: Thank you for taking the time to speak with WMEAC. I look forward to hearing you the Wege speaker series.

Dr. Ali: I look forward to meeting you, and thanks for doing this. … Stay blessed.

This interview has been condensed and edited for clarity and length.