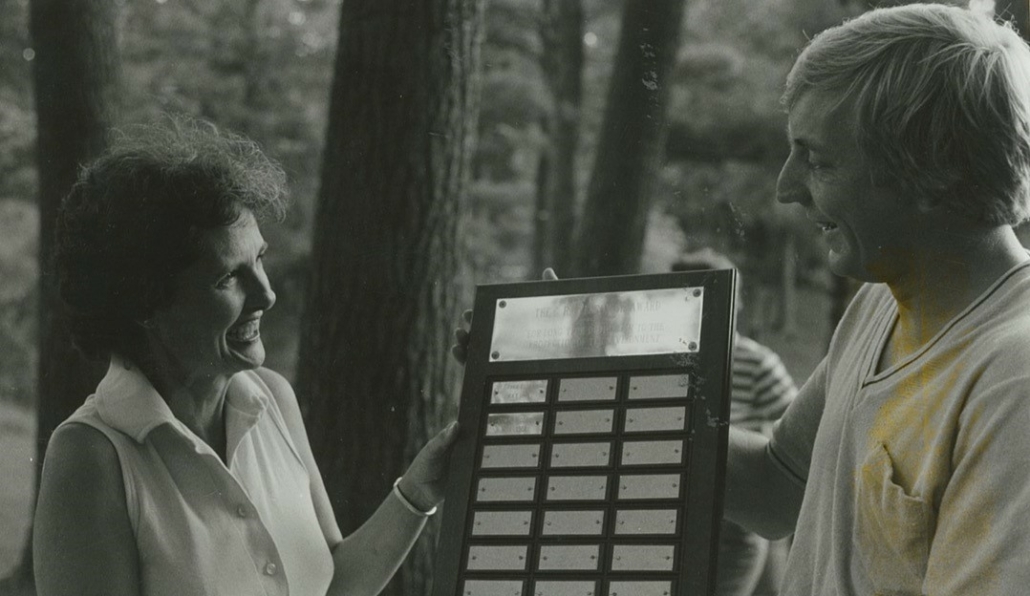 Standing on the Shoulders of a Giant: WMEAC reflects on Joan Wolfe’s Legacy

When the Michigan legislature passed the Michigan Environmental Protection Act in 1970, Joan Wolfe was enormously thankful.

“I had a nervous breakdown,” Wolfe told the Greater Grand Rapids Oral History Council in  a 1993 interview.

Wolfe had an unassuming childhood. She grew up in a suburb of Detroit during the Great Depression and became the vice president of her high school senior class.

“Before college, I never knew that a woman could be more than a vice-president or an aide to somebody,” Wolfe said in 1993. Her later experiences led her to fully realize just how far women could go.

After attending a small, all-girls college in Virginia for two years, Wolfe found that she wanted a more exciting, diverse educational experience, so she transferred to the University of Michigan, where she earned a degree in economics.

Once she picked up her degree in Ann Arbor, Wolfe worked for a few years and got married to her husband, Will Wolfe. As he finished dental school, Wolfe raised their two children. Once Will finished his training, they moved to Grand Rapids.

“We didn’t know anything about it,” Wolfe said. “We had only ever heard about it.”

In Grand Rapids, Wolfe joined multiple community organizations who were interested in protecting the environment. She went birding with the Audubon Club, attended Junior League meetings, and became the chair of the Grand Rapids chapter of the League of Women Voters. It wasn’t until she read Rachel Carson’s Silent Spring, however, that she became an environmentalist.

Wolfe, who was at the time a housewife, called up some of her friends, a lawyer, her church secretary, the Grand Rapids Press, and local radio stations, and set up what became WMEAC’s first meeting in 1966. They met in a packed church basement.

“I suggested there should be a council and they all agreed,” Wolfe said.

Bearing the weight of the organization on her shoulders, Wolfe worked to build WMEAC’s connections throughout the state. She reached out to anyone interested in the environmental cause–people who wrote op-eds for the newspaper, heads of national ecological organizations, and women from her church and PTA. With the assistance of lawyers, scientists, and many other housewives like herself, Wolfe led WMEAC to front the passage of the Michigan Environmental Protection Act.

“WMEAC was born during the age of Vietnam confrontation. We rejected confrontation as counterproductive,” Joan wrote in the 1970s. “We were deliberately mainstream. Our effectiveness came from the responsive, creative, hard work and the cooperation of our organizational members.”

Wolfe’s leadership and hard work led WMEAC to many victories. In 1972, Michigan passed the Inland Lakes and Streams Act, which continues to protect Michigan’s inland waterways from development and contamination. In 1973, WMEAC activated the Grand Rapids community to join together and ensure that the East Beltline became a limited-access highway instead of a commercial street.

Wolfe left WMEAC in 1973 when Michigan Governor William Milliken appointed her as the first woman on the Natural Resources Commission, where she continued to use her activism and abilities to work for a safe and sustainable future for Michigan.

“It was funny, he called my husband to ask if it was okay before he called me,” Wolfe said in 1993.

Despite the biases she faced, Wolfe didn’t allow anyone to stop her from pursuing her vision.

“As a woman, she got a lot of pushback from men who that that women should not be in powerful public positions,” Mary Robinson, WMEAC’s current Director of Development, said. But Wolfe didn’t allow the prejudice of her time to hold her back.

“She was really one of the leaders in the early days of the environmental movement,” said Ken Sikkema, who was the Executive Director of WMEAC from 1977 to 1978. “Those early days were based locally and based on volunteers. The catchphrase was ‘Think Globally, Act Locally.’ Wolfe represented those early days.”

“Over time, the environmental movement grew and became more professionally based. We lost something,” Sikkema said. “It was the volunteer nature of it that made it very impactful.”

Sikkema noted that the current environmental movement stands on the shoulders of giants like Wolfe. “That idea characterizes the modern-day movement and modern-day organizations,” Sikkema said.

Wolfe did excellent work using her network, telephone, and leadership. In doing so, she demonstrated the fact that anyone can be an effective activist and leader. “She was good at convincing people that they could do things,” Robinson said. “If Joan told you that you could go to Lansing and testify before the legislature, you knew you could do it.”

“She was the archetype of activism,” Robinson said.

WMEAC continues to work towards creating a safe and sustainable future for West Michigan, with Wolfe’s life and leadership as a model. “We’re a little organization that has really big ideas,” Robinson said. “We’ve always been small staff-wise, but we’ve always tackled big issues. You see that consistently throughout our history.”

Following in the footsteps of Joan Wolfe, WMEAC is still working to enhance the environment and pursue environmental justice in West Michigan. If you are interested in participating in WMEAC’s vision, check out WMEAC’s website or contact WMEAC at info@wmeac.org.

PrevPreviousWMEAC Celebrates the Challenges and Successes of 2020
NextInvesting in the Future: Sustainability and Parenting in the PandemicNext