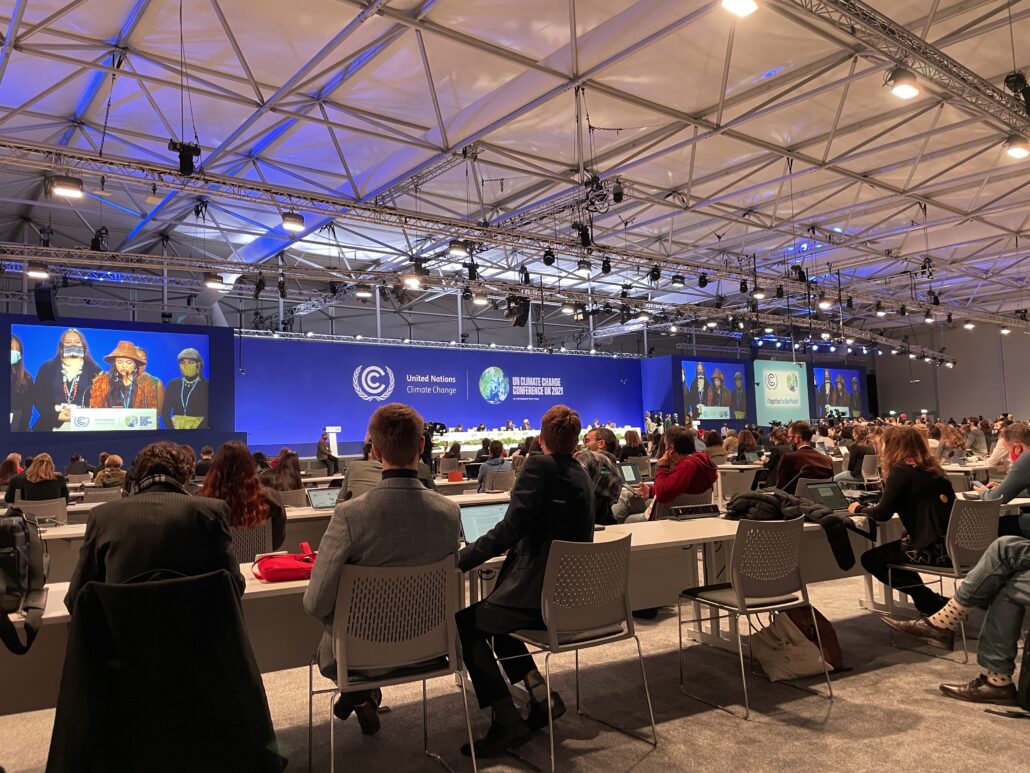 Tackling the issues which arise from climate change is a growing concern for many individuals. Nathan Rauh-Bieri recognizes the urgency of these problems and has been facing them head on, advocating for sustainable climate plans and participating in events which strive to ensure a safe future for generations to come.

But most know that to make tangible change, it is ultimately up to governments and corporations to dedicate time and money into sustainable operations. Individuals can take personal responsibility to alter their lifestyle in hopes of lowering their environmental impact, but one person can only change so much on their own.

In late fall of 2021, Rauh-Bieri attended the 26th United Nations Climate Change Conference (COP26) in Glasgow, Scotland to observe how national governments plan to make substantial and necessary changes to the world’s current climate. Rauh-Bieri attended the UN Climate Change Conference as a civil society observer representing the Climate Witness Project. During the conference, he participated in external activism alongside other faith groups, corresponded for the Climate Witness Project, the Michigan Climate Action Network, and wrote for a number of outlets.

Due to the COVID-19 pandemic, the conference was delayed a year. People from around the world were anticipating its success and were excited to attend themselves as actions were made that were shaping the future.

“COP26 was initially billed as being the most inclusive COP ever” Rauh-Bieri said. Unfortunately, all those that flew to Glasgow to witness politicians make world-changing decisions, were fairly discouraged and disappointed. “By the time it was over, many were saying it was the most exclusive COP ever.”

This, Rauh-Bieri emphasizes, was largely a result of COVID-19 concerns. Several safety precautions were in place that kept attendees and climate advocates out of conference meetings and travel restrictions prevented many international citizens from participating. The restrictions made it particularly difficult for nations with minimal vaccine access, many of which are in the global south, to participate.

Although grateful to make it to Glasgow, Rauh-Bieri found it difficult to actively participate. “It felt like a bit of a goosechase everyday,” he said, stressing that “Locations would change and there would be sessions but they would be closed to observers in many cases which was a change from past COPs.”

He says that many non-governmental attendees of the conference were not able to attend as many sessions as they had been previously able to at prior COPs. When a colleague of Rauh-Bieri asked why the access of non-governmental attendees to sessions was restricted, a security official answered “You observers are just protesters.” Rauh-Bieri stated that it is unclear whether these restrictions were due to COVID-19 concerns or were the result of an internal decision to limit access. Ultimately, he expressed that it felt like civil society was not welcome in the rooms where big discussions and decisions were being made at COP26.

Despite the exclusivity of the sessions, COP26 placed an emphasis on the role of women in the climate movement, dedicating an entire day of the conference to discussions of gender equity and climate. “Anecdotally, the most powerful leaders in and outside the COP were young women especially in the global south,” Rauh-Bieri said.

This sparked discussions about the gender and generational gap in the climate movement. Rauh-Bieri expressed that so many young women who “shouldn’t have to be carrying the burden of this” were climate activists at COP26 while a lot of the delegates were overwhelmingly older and male. “So many powerful speakers and delegates were women but they were playing an outside role in holding their fellow delegates’ feet to the fire.” Overall, Rauh-Bieri felt that there was a lot of leadership by women which was particularly powerful to see.

When it comes to COP26 as a whole, Ruah-Bieri said “A lot of people were disappointed by the outcome.” He emphasizes that the conference was still a historic achievement, but given where climate politics are and the state of the atmosphere, we needed hugely ambitious outcomes that we didn’t get.

COP26 resulted in “Good things that mean the game has changed in some ways but there was a lot of hope placed on this to really be transformational and to send signals around the world that leaders are taking this seriously, understanding the assignment, and are going to do what it takes to keep the people safe, and after the conference it felt that they didn’t rise to the moment and come with the necessary ambition.”

While “some low-lying nations knew what needed to happen, at the end of the day a couple of pretty wealthy countries were able to water down the results” of the conference. For climate action, the changes that need to be made are quite radical and therefore, anything other than that is a disappointment. Ruah-Bieri expanded to say “Incrementalism is inadequate for right now” and what COP26 achieved was largely incremental.

Despite the disappointing nature of COP26, Ruah-Bieri expressed that the conference renewed his energy for the work being done by local and city-based organizations like the Grand Rapids Climate Coalition to try and push the City of Grand Rapids to take more ambitious action on climate and climate justice. He said that there was “good conversation about what roles cities can play in leading the way where countries and international agreements can’t,” and that many of these cities and regions have the opportunity to step up in terms of climate action.

“The takeaway is that just because the conference didn’t quite turn out the way we wanted there is still so much we can do to improve people’s lives and preserve a habitable climate.”