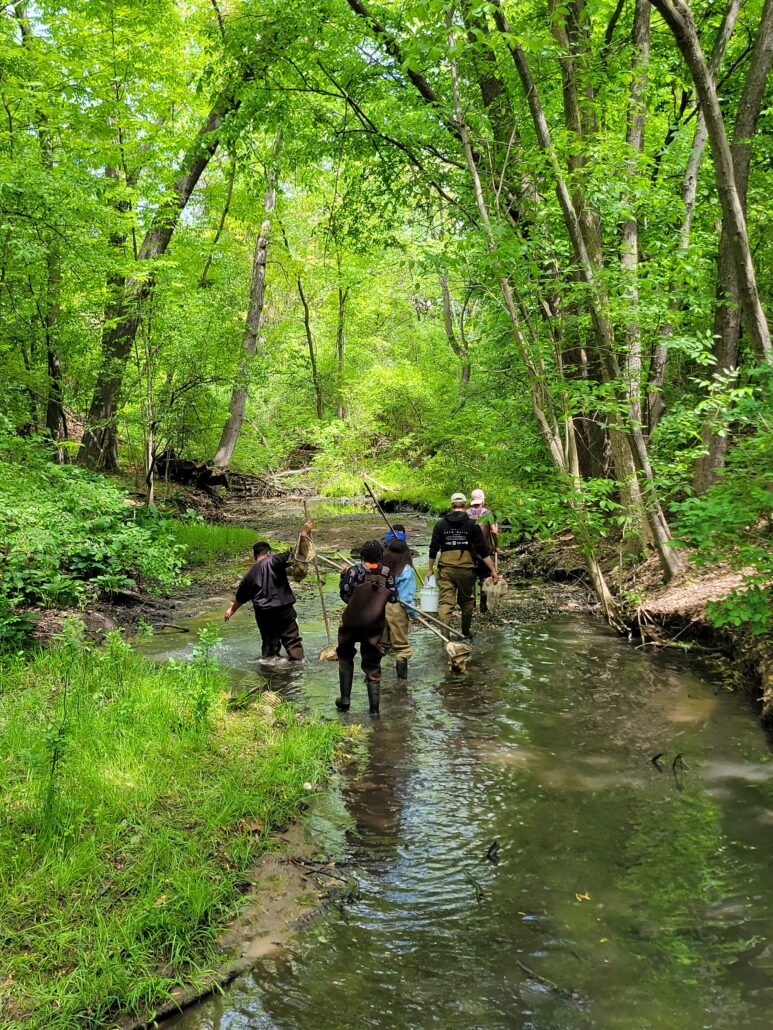 Teach for the Watershed : A Volunteer’s Perspective

Last Thursday, I woke up for work earlier than usual. I was up at 6:40 a.m. to get dressed, eat breakfast and be ready to be picked up at 7:45 a.m. by Kyle Hart, education programs manager at WMEAC. Kyle and I were on a tight schedule so early today, because instead of being in the office, I was going to help Kyle run several stream studies as part of WMEAC’s Teach for the Watershed (T4W) program. Kyle had given me a rundown of the day, but I still didn’t know what to expect. Even so, I was along for the ride!

All I knew was that I was going to be outside, teaching kids about their local watershed. Seems simple enough, right?

T4W is a place-based outdoor education program that builds upon the Michigan Science Standards and the Next Generation Science Standards for watersheds, ecosystems, and nonpoint source pollution. Students participate in this program that WMEAC offers as part of their curriculum.The first part of this program begins in the classroom with an Enviroscape watershed model that teaches students how water moves through landscapes, collecting pollution as it makes its way towards our watersheds. Kyle had already delivered this part of the program for the students today and told me more about it:

“We do an hour-long presentation and then we use the Enviroscape watershed model where we get to apply mock pollutants like salt, lemonade mix, soap and sprinkles to dirty up the watershed and see how stormwater runoff from parking lots, sidewalks, streets, moves that pollution form our watersheds to waterways. The students see that connection in between spraying water and also making a mess. Fourth grade students have a lot of fun, they ask a lot of questions, and they are  very aware of environmental issues in their communities.”

The second part of the program includes a two hour field trip to complete a freshwater stream study. Students rotate through four different stations and learn about different properties of a local stream. They go on a nature walk and learn about the stream and how the land around the water affects its quality. They sample water from the creek and river to test for pollution and chemicals like phosphates, nitrates, dissolved oxygen, and acidity,  put on waders and collect macroinvertebrates like insects, worms, snails, clams, and crustaceans. Finally the students  identify the organisms they collected to determine the biodiversity of the stream.

The first stop of my day would be at Godfrey-Lee Early Childhood Center, working with fourth-graders and employees from the nearby General Motors facility in Wyoming. I didn’t quite understand why GM employees were going to help run the stations, so I asked Kyle about this partnership:

“We have a fantastic opportunity from General Motors to provide this for the Godfrey-Lee students through part of their corporate giving program . They’re so generous to give us grant funding to execute the program and also have opportunities for employees at GM Components Holding to get out into the field and do some of the instructions, which I think is their favorite part.”

It turns out that General Motors has been involved in its GM Global River Environmental Education Network (GREEN) program for over 25 years, dating back to 1984. The program originated because high school students in Ann Arbor were concerned about water quality in the Huron River. GM, as part of its response to these concerns, set up the GREEN program, as a way to give back to the communities they impact.

I grew up in the area, in Wyoming, and I had driven past the GM Components Holding facility on Burlingame Avenue maybe thousands of times. I knew it was some industrial car plant but I made the connection when Kyle told me it was a GM facility and that their employees were helping out for the morning…

I guess if there’s a giant automotive manufacturing plant in the middle of the city next to schools and homes that can contribute to pollution in the area, I think it’s only right for the company to give back to the community in some sort of environmental way. There’s been good news in regards to the GM facility in Wyoming. It was recently  reported that Consumers Energy and GM have made a 20-year agreement and pledge to use 100% clean energy in the facility, offsetting 235,000 metric tons of carbon dioxide annually which is 45,725 home’s electricity use for one year. There are many industrial sites in  Wyoming, Mich., a predominantly white low-income city where the average earnings is $33,398. Poverty levels are 17.62% (Hispanic), 22.32% (Black), 28.66% (American Indian), 56.25% (Native Hawaiian & Pacific Islander), and 8.55% (White).

Initiatives like T4W are introducing students to the outdoors and ecology in communities in West Michigan, but I’m still thinking about this connection in my city and what it means as young people grow up and begin to make the decisions about jobs and the environment in their communities.

When I arrived at the Godfrey-Lee Early Childhood Center, I joined Kyle and a GM employee in collecting a sample of aquatic macroinvertebrates from Plaster Creek, a tributary of the Grand River that flows right through the school district. With my waders and dip net, I went into the creek and caught some tiny insects. By the time we finished and got out of the river with our sample, we were greeted by groups of students and teachers that arrived just in time for their field trip.

Kyle had to leave shortly after the field trip kicked off because he had to set up for the same event at Richmond Park in Grand Rapids, so I became the only WMEAC staff member remaining at Godfrey-Lee. I was assigned to lead the nature walk. I was a little nervous because everything was new to me, but I relaxed once I realized two other GM employees and teachers were guiding the students through the nature trail.

The nature walk was a simple task. Students answered questions like “How deep do you think the stream is?” and crossed off boxes on their scavenger hunt bingo board of things they identified like a bumpy tree stump or flying insect. The students were having a blast running around outside trying to find everything on their checklist. The fourth graders were calm and doing their tasks and not very talkative with me, but that would change when I met the sixth graders up at Richmond Park that afternoon.

Kyle returned to pick me and the rest of the T4W equipment up from Godfrey-Lee and drove up to Richmond Park where students from Harrison Middle School were going to join us.  Again I was in charge of the nature walk, but things were a little different here. I was engaging more with the students and seeing how much energy they had. They were running through the forest, climbing a sand dune, and asking many questions about the plants and bugs. These students were part of the Grand Rapids Public Schools (GRPS) district, so I asked Kyle more about this collaboration,

“Part of GRPS curriculum goals is to provide a high quality environmental experience for each grade level. This is part of a larger Grand Rapids Environmental Education Network (GREEN) initiative where partners like WMEAC, John Ball Zoo, and Kent County  Recycling Center all come together and service one of the grades. Students Pre-K to 8th all get to do some sort of place-based environmental project or experience. We are fortunate to provide that for the sixth grade classes of GRPS. Sixth grade is when you learn about watersheds, nonpoint source pollution, stormwater runoff and best practices to reduce pollution and impact on water quality”

The day came to an end fairly quickly at Richmond Park and as we said our final goodbyes, kids were pleading to their teachers to stay and not go back to the classroom. They really enjoyed their stream study that involved wading in the river, collecting organisms, identifying bugs, performing chemical tests, and walking through nature. I also felt a great sense of joy because I was able to give these students a chance to have fun and learn about nature in a positive way. I needed to ask Kyle about his favorite part of the program because seeing the students laugh and engage was inspiring,

“My favorite part about T4W is seeing future scientists in every group of students that we do the program with. The natural sciences provide a career that is in demand and if they like being outside and learning about their natural world, they can further their education to learn about that. It’s a very real career path for them.”

I’m thankful I was able to get out of the office and spend a day outside working with the students. It really showed me the scope of WMEAC’s impact and the diverse group of students that benefit from educational opportunities like T4W.

PrevPreviousPFAS Health Studies in Michigan: What you Need to Know
NextCleaning up our CommunitiesNext