It was a sunny July morning in Huff Park with clear blue skies and not a cloud in sight. A group of five young students in matching white t-shirts bounded off the bus from the Grand Rapids Public Museum day camp. The group’s guides for the day – Teach for the Watershed interns Kyle Hart and Hannah Mico– waved toward a wide-open clearing.

Once the group settled down and sat cross-legged on the grass, Kyle asked “Who knows what a watershed is?”

A few hands shot up, and Kyle pointed to one especially eager student.

“A watershed is a system of waterways, right?” she asked.

Kyle bent down on one knee and gave the student a high five.

“That’s close!” he said. “Watersheds are land areas that drain into a stream or creek. We live in the Great Lakes Basin, which provides people and animals with access to freshwater.”

Hannah stepped forward with a long net in hand.

“Today we’ll be stream sampling to determine the water quality of Lamberton Creek,” said Hannah, running her fingers along the metal edge of her net. “The nets we will use are called D-Frames because their frames are shaped like the letter D.

The idea is to point your net upstream, mix up the sediment with a nudge of your foot, and scoop up any macroinvertebrates you see.”

A young boy frowned, raised his hand, and asked, “What’s a macroinvertebrate?”

“Great question,” said Hannah. “Macro means something is big enough to be identified without a microscope. Invertebrates are animals without a backbone. Discovering which macros live in the creek will help us learn about the water quality of the creek and the larger watershed.”

Hannah set down her net and gestured toward a rack of waders. “Waders feel kind of like snowpants. If you put them on, you can go anywhere,” she said as she took a pair off the rack and tugged it on with a short hop.

“You can go anywhere?” said one student, staring at the waders with wide eyes. “I feel unstoppable!” 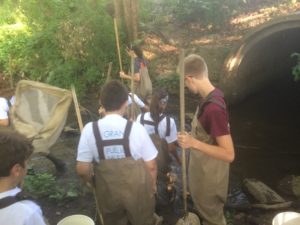 The group marched in a single-file line toward a tree canopy on the edge of the clearing. Beneath the canopy stretched a narrow dirt path winding along the bank of the creek. Tree branches cast cool shadows over the path, offering shade from the summer heat, and tall grass lined the path’s edges.

The path led to the creek, which trickled through a concrete tunnel. The creek’s brown water appeared dark and cloudy. Stones and fallen branches protruded from the creek, but the muck made it difficult to see much below the water’s surface.

With the group crowding around the edge of the creek, Hannah turned to them and said, “Be careful. It’s very muddy down there. You don’t want to get stuck.”

The students hesitated for a moment, dipping their toes into the creek, before splashing in. Soon the creek was noisy with the sound of boots stepping in and out of the mud. One student sunk too deep and fell face first, but managed to catch himself on a branch before crashing into the creek.

The day’s catch was slow going at first. The group scanned the creek with their D-Frames in hopes of netting some macros. More often than not, they netted nothing but mud.

Just when the group started grumbling with impatience, Kyle held up his net. “Who wants to stick their hand in here?” asked Kyle. The group responded with shouts of “eww” and “gross” before Kyle said, “The creek we’re in is murky, muddy, and mucky. You’ll need to take the plunge at some point.”

With a little encouragement, one student stuck her arm deep into Kyle’s net. When the student swirled her hand around, she gasped.

“Nice one!” said Kyle, pointing out the tiny red organisms crawling around the student’s hand. “You know what those are?”

The student shook her head with a grimace.

“They’re not going to suck my blood, are they?”

Kyle shook his head and patted the student on her shoulder. “Nope. You’re safe. Come on, let’s see what else we can find.”

Over the next hour, the group caught all sorts of creatures. A pair of boys bragged about catching “over fifteen fishies,” which turned out to be sticklebacks. Other common finds included snails, crayfish, scuds, and insects.

“Science is dirty,” said Kyle. “That’s what this whole day is about – getting your hands dirty.”

It’s Up to You 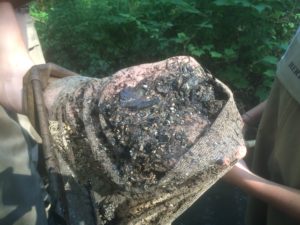 With buckets packed to the brim with mud and macros, the students returned to the clearing. They laid their buckets down and spotted stations set up with new materials. Each station consisted of plastic trays filled with a thin layer of water, a set of tweezers, and charts featuring images of macroinvertebrates.

The group started picking the macros out of their buckets with tweezers and placing them into the trays. Once the macros were close enough to examine, the group compared the macros to their charts. The group quickly discovered that their specimens were pollution tolerant.

One student raised her hand and asked, “Does this mean the watershed is polluted too?”

“It sure does,” said Hannah.

“How did these areas get polluted?”

Kyle jumped in, saying that different areas of the watershed become polluted in different ways. In urban areas, chemicals often mixed into stormwater runoff from city and suburban streets. In rural areas, excess phosphates and nitrates from fertilizer made their way over time into water sources.

“The big point is that pollution does not come from one place,” said Kyle. “Pollution is spread out so it’s hard to point one spot where it comes from.”

Water Trails: Birdwatching on the Grand
Scroll to top