Chicago Mayor-elect Rahm Emanuel doesn’t take office until May, but he is already dealing with the fact that this will be Chicago’s first mayoral change in 22 years.

There is a backlog of advice that people are dying to share, including about environmental issues.

Two days after the election, the Grand Rapids Press featured an editorial congratulating Emanuel. At the same time it put him on notice with its expectations related to Asian Carp.

Noting that Emanuel was a Great Lakes advocate while in Congress, the editors asked him to use his considerable influence to speed federal efforts to stop the carp advance.

Specifically, they urged Emanuel to endorse the Great Lakes Commission’s two-year timeline to study physical separation of the Great Lakes and Mississippi waterways.  The Army Corps of Engineers says it needs five years to do the official work on the study.

The Press editors wrote that Emanuel should use his new position to “bring some pressure to bear on his old boss in the White House to more forcefully attack and stop the destructive Asian Carp.”

Those editors may be disappointed if they’re waiting for Emanuel to turn up the heat on the Obama administration.

The new mayor’s transition team did not respond to the Echo’s request to comment on thePress editorial. But it did take a position on Asian Carp during the campaign. 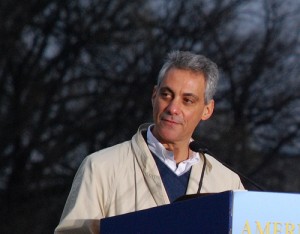 Last December candidate Emanuel issued a press release praising the White House’s Asian Carp strategy. He stopped just short of a total endorsement – politicians like wiggle room – but the fact that he issued the release says he’s onboard with the status quo.

Which means continued reliance on the electrical fence as the primary line of defense while the Army Corps of Engineers conducts its study.

Regarding physical separation of the Great Lakes and Mississippi watersheds  “we simply don’t have time to wait for the Army Corps’ snail-paced separation study,” said Henderson, who served as Chicago’s first Environment Commissioner from 1992 to 1998.  “We are confident that separation can be done in a way that revitalizes flagging infrastructure and industry.

As mayor, Mr. Emanuel can and should push that solution immediately.”

I appreciate that the Michigan media and Chicago environmentalists want to advise the new mayor. Who doesn’t?

But what priority should Emanuel give environmental issues when he has to deal with a budget crisis and select a new police chief on day one?  I suspect the environment won’t be top of mind early in his term, but hopefully it will be as his administration gets its bearings.

Remember though, Emanuel has long-made Great Lakes protection a talking point priority. In stump speeches over the years he often referred to the Great Lakes as “our Grand Canyon.”

In that December 2010 press release as a mayoral candidate, Emanuel said he would “continue to bring all necessary resources to bear to protect Lake Michigan.”

With that statement Emanuel has essentially held himself to a higher standard of care for the Great Lakes than his predecessor. He can now meet that standard and drive Chicago water policy by:

Chicago has two transportation systems that connect to the world – O’Hare airport and its waterway system that leads to Lake Michigan and the Great Lakes. It’s investing billions of dollars to upgrade  O’Hare so it remains the country’s preeminent air transport hub well into the future.

Why should its waterways  be allowed to languish in early 20th century mode?

I’ll leave it with the NRDC’s Henderson:

“Water is one of the biggest reasons that Chicago became the grand metropolis of the heartland; Mr. Emanuel will need to protect and improve the city’s relationship to the Chicago River, Lake Michigan and its regional neighbors to keep advancing as a global city.”