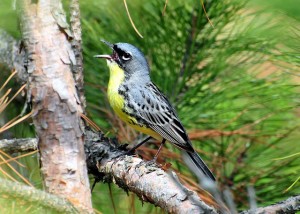 Kirtland’s warbler is making a comeback in Michigan, thanks to the conservation efforts of people. Photo: USFWS, Joel Trick.

Several species of birds in the Great Lakes region are making a comeback, according to a recent report.

Federal officials documented the successes and the challenges facing several bird species on U.S. public lands in the 2011 State of the Birds report.

Two success stories are from within the Great Lakes region – the Bartel Grassland restoration project outside of Chicago, Ill., and the state of the Kirtland’s warbler in Michigan.

The first State of the Birds report in 2009 alerted people to the health of U.S. bird populations, said Alicia King, communications coordinator for migratory bird programs with the U.S. Fish and Wildlife Service.

The Bartel Grassland restoration project is a citizen-led effort that began in the early 2000’s to rejuvenate the grassland habitat in southern Cook County, Ill. When locals noticed the habitat of a nearby hayfield deteriorating, they began to see how it might be restored, said Judy Pollock, director of bird conservation with the Chicago branch of the Audobon Society.

The problem facing the Bartel Grassland was an influx of trees, Pollock said. Conservation efforts in the 70’s operated under the assumption that planting more trees was better for the environment, when the trees actually were detrimental.

“There was good research coming out that showed grassland birds’ habitat was degraded by significant woody vegetation in the grassland,” she said. “Prairie birds are the rarer birds. Planting trees took away a lot of that habitat they need.”

Since then, project partners have removed many of the trees and other wooded vegetation and returned the grassland to its natural state. The results have been tremendous, Pollock said.

“Not only have grassland birds really rebounded, but as soon as the hedgerows were out, we got Short-eared Owls and Northern Harriers in the wintertime,” she said. “We didn’t have them at all before the project started, and one winter we had 22 Short-eared Owls. Now we have them regularly in decent numbers every winter.”

Restoration workers also disabled the drainage tiles, which had drained the area so it could be farmed.

“When we disabled the drain tiles, wetlands started forming,” Pollock said. “Two years ago, we had a Whooping Crane visit. It’s exciting to see a Whooping Crane in this thing that used to be a hayfield. It’s really astonishing, and to see it happen so quickly.”

Pollock said much of the success is attributed to managing the grassland, instead of letting it grow over with trees and brush.

“If you leave (the lands) alone, they rapidly degrade,” she said. “The situation on public lands is precarious if there aren’t the resources to go in and do the disturbance they need.”

The bird, which lives almost exclusively in the jack pine forests of Michigan, is considered endangered, said Ken Rosenberg, director of conservation science with the Cornell Lab of Ornithology at Cornell University.

“The public doesn’t always understand,” Rosenberg said. “They think cutting is bad, or burning is bad. But there’s a lot of wildlife that needs those habitats, and you can lose the birds you’re trying to protect.”

This trend appears throughout the report, Rosenberg said.

“We’re pointing out that not just protecting the lands is enough,” he said. “Bird sanctuaries could be completely protected from development and birds would still disappear. It’s very important to emphasize the need for active management of doing these burns and cuts.”

King said that by noting these success stories in the report, people can focus on the advantages of conservation.

“We want to call attention to the birds and plight of birds,” she said. “In some cases where conservation has been applied, it works. With the things going on, of course, sometimes we get so busy we forget that birds are so important for our world and environment.”