Chicago is in the midst of a mayoral election campaign and an issue that wouldn’t normally garner much attention is right there with the budget, schools, city services and crime.

The propriety of privatizing Chicago’s water service has everyone’s attention.

Outgoing Mayor Richard Daley has had a strategy of selling assets in recent years that generated billions of dollars. The revenue was used to keep from raising taxes and to balance the budget.

No one paid much attention until 2009 when Chicago sold its parking meters to a corporation and the deal turned into a debacle. Rates skyrocketed, service tanked and after the fact scrutiny revealed that it was done in a hurry and with little transparency.

The city council was given only a few days to review a complicated contract. The council then abdicated its oversight by rubber-stamping an agreement that some aldermen later admitted they either  hadn’t read or didn’t understand.

Citizens (voters) were outraged and the media was all over the issue.

Word then leaked that Chicago was considering a similar sale of the city service that provides water to residents. No one wanted a repeat of the parking meter mess so everyone’s radar was on alert.

When confronted with the rumor of a potential deal to privatize water in 2009, the city soft-pedaled the inquiries. A mayoral spokeswoman told the Chicago Tribune’s Mike Hawthorne that he was “giving this more weight than was warranted.”

I’ll share my thoughts in a minute about the merits of water privatization but it will be useful to know what those with influence think. 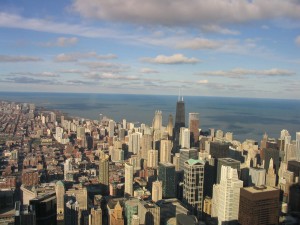 Water privatization  will land squarely on the desk of the new mayor so I reached out to the leading candidates and asked for their position.

Former White House Chief of Staff and mayoral candidate Rahm Emanuel has a big lead in the polls but his office did not respond to a number of requests to comment. But he did address the overall privatization issue in answers to a questionaire from the Better Government Association, a watchdog agency.

“All options for improving city services and reducing costs should be on the table including contracting operations to private companies,” Emanuel wrote. He continued with a business school-type analysis talking about “benchmarking” against “top performers” and making a decision on the merits of the process.

The B-school jargon  tells me he thinks it’s a financial or business decision.

An official for the number two candidate in the polls, former mayoral Chief of Staff Gery Chico, did respond.  Chico is “against selling essential city services that citizens depend on, including water,” said  his media representative Brooke Anderson.

Political candidates aren’t the only ones with an opinion on the hot button privatization issue.

Laurence Msall is president of Chicago’s Civic Federation, a non-partisan government research agency that works to improve the quality and cost-effectiveness of government services.

Msall said his organization takes no position on privatization of the Water Management Department, “but given the budget realities that Chicago faces, it is something that should be considered.”

Msall said that any process needs to be transparent and that water service would not be his first candidate for privatization. That honor would likely go to garbage collection.

What about the ethics of selling a service like water that every Chicago citizen relies on for their very existence?  I believe that is the real question.

The Rev.  Clare Butterfield is the executive director of Faith in Place,  an Illinois not-for-profit that supports the Earth stewardship efforts of faith congregations. Butterfield is also a respected environmental ethicist.

Butterfield has concerns about privatizing the water service “because water is essential for life but unequally distributed” she wrote in an e-mail. “The problem with inserting a private corporation into this equation is that corporations must operate for the benefit of their shareholders.”

When water is privatized management  focuses on the near term and the decision making process beomes less transparent, Butterfield said.  A corporation may well be more efficient than a public service, but that’s not the point.

“Privatization of the water service is deeply troubling from an ethical point of view,” she said.

Fix it, don’t sell it

I can argue both sides of an issue with the best, but not when it comes to privatizing water.

Water isn’t a parking meter, a bridge, or an airport, to name a few of the assets Chicago has sold or wants to sell.

If the current Water Management Department isn’t efficient or cost effective, the new mayor should fix it, not sell it.

Milwaukee took a hard look at water privatization a few years ago but backed off when protests generated more heat than city council members could bear.

But Chicago is a city that prides itself on leading the region and doing big things. It can set an example for Milwaukee and other Great Lakes cities by not taking the easy way out in exchange for a few short term dollars.

It can lead by demonstrating that water belongs to its citizens, and that it has  more value than  as a budget balancing tool.

A few days before the election candidates are treading lightly on privatizing assets and services.

But these are candidates talking and after the election the next mayor will be faced with the reality of governing. A decision to sell the water service will be tempting and real, not an abstract debate topic.

Chicago’s new mayor should know that control of water, Lake Michigan water, is not a commodity to be sold to the highest bidder.

It needs to remain under public control for all citizens, be they from Chicago’s elite Gold Coast or from a diverse neighborhood on the South or West side.

Because that’s the ethical thing to do for Chicago and the Great Lakes region.