I don’t think most people would imagine the picturesque White Lake area, situated in the northern portion of Muskegon County, as a polluted toxic hot spot. But that’s what it was at one time.  It isn’t anymore, and that’s truly a good story.

The community was settled during the lumber era on White Lake, in close proximity to Lake Michigan. Two cities were founded on either side of the White River and the lake, surrounded by rural townships.   It became a generational destination for Chicago folks who arrived by steamboat and a charming resort destination.  Economic prospects were not always bright, despite a tannery situated on White Lake since 1865.  When there was interest in the 1950s from the chemical manufacturing industry, community leaders rolled out the red carpet.  Hooker Chemical Company was first in.  Invited by a local plumber to inspect the area’s salt caverns, the company decided to build a plant to use the sodium chloride from the salt caverns to produce caustic soda and chlorine. A “fine chemicals” plant was constructed a few years later to use the waste chlorine to produce chlorinated organic chemicals. One primary product was hexachlorocyclopentadiene or C-56 as it was known, used in making pesticides such as Mirex.  E.I. DuPont de Nemours soon located in close proximity to the Hooker plant.  The companies provided good jobs, increased business in the small community, and both local school districts expanded.  Other chemical companies also located in the area. 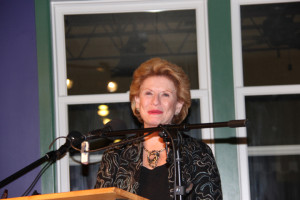 There was a dark side to the new era, however.  Concerns grew regarding fumes, leaks, accidents, and pollution of drinking water wells, and White Lake, in particular from Hooker Chemical.  The concerns of local activists pitted neighbor against neighbor.  After continued protests, testimony from a Hooker Chemical employee turned whistleblower, and national media attention, the state finally took action in the late 1970s and cleanup began at the Hooker Chemical site, as well as at other sites.  Most of the chemical companies responsible for White Lake’s pollution problems would eventually close.

The story was not over, however.  In 1985, White Lake was designated an Area of Concern due to its pollution problems, one of 43 in the Great Lakes (14 in Michigan) termed “toxic hotspots.” The 1972 U.S. – Canada Great Lakes Water Quality Agreement (updated in 1978 and 1987), called for the two federal governments to work with the states and Canadian provinces and local citizens to develop Remedial Action Plans (RAPs) or cleanup plans for each Area.

The state of Michigan made quick progress at addressing its 14 Areas of Concern and a number of RAPs, including White Lake’s, were completed in 1987. That could have been the end of the story — RAP written, placed on shelf, nothing more done.  But it wasn’t.  In 1992, a group of White Lake area residents established the White Lake Public Advisory Council (PAC) to finish restoring White Lake to health.

The PAC monitored area contaminated sites and held public meetings to spur action and get effective cleanups.  Polluted sediments were removed from several areas in the lake.  The PAC worked with state and federal environmental agencies to develop goals for removing the problems or impairments identified as problems in the lake.  The Muskegon Conservation District provided technical and administrative assistance and the GVSU Annis Water Resources Institute provide scientific resources. Studies were done, priorities set, and when funds from the federal Great Lakes Restoration Initiative were available in 2010, White Lake was first in line and ready for action, obtaining over $2 million to address lakewide habitat restoration – a project that would boost the Area of Concern to delisting.

All impairments were removed in the spring of 2014 and in the fall, the PAC held a huge community celebration when delisting was officially declared by the U.S. Environmental Protection Agency. 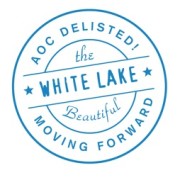 Story over?  Not so quick.  The PAC set about working on a strategic plan for after delisting – to address ongoing and future issues and maintain long-term stewardship.  A new group has been formed that has broader membership and investment that will carry White Lake’s story forward.

Along the way, we learned important lessons.  We learned it’s our lake and our responsibility to protect it.  Citizens raised the alarm to halt the pollution and get action – citizens made sure cleanup happened.  The community was the “squeaky wheel” that made it happen.  Engaging the community was vital and we were all in it together.  Some were involved in the bureaucratic process, some attended public meetings, some wrote letters, and others reached out to elected leaders – but it was all needed.  We learned it did not matter what politics our elected leaders practiced – we worked with them equally to get what we needed and we gave credit when it was due.  We learned how to interact with state and federal governmental partners and get things done.  We learned a lot about our lake – most of all, we learned that prevention is easier and cheaper than cleanup.  And too, if a small community like ours can get our lake cleaned up, other communities can as well.  Visit Restoring White Lake for more information.