“Through GR Forward, what we uncovered was that there are about nine miles of missing connections throughout the city—not just downtown—along the river,” said Tim Kelly, Project Manager at Downtown Grand Rapids Inc. (DGRI). “If we can build out those nine miles, we could have a really connected, cohesive trail system that would link downtown and the city into these larger regional trail systems. So you could get on a bike in downtown and actually ride all the way over to Lake Michigan.” 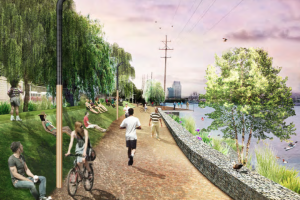 DGRI, through partnership and with the aid of a grant secured by the City,  is working on construction for one of the connecting trails—the Coldbrook extension—which will link Canal Street Park to Leonard Street. This bikeway would only close up about a quarter mile of unconnected paths—but planners say this project can also set an example for future extensions.

“That’s under construction now, and we’re hoping to wrap that up sometime in the fall,” Kelly said. “We’ve been kind of classifying that as a demonstration project for what the continuous river trail is going to look like.”

Most of the proposed connections along tributary streams will require that the City obtain public access easements from private landowners. The Green Grand Rapids Master Plan notes that this effort is expected to be a lengthy one. As an interim measure, the Plan has recommended prioritizing on-street bicycle lanes and pedestrian access points to establish neighborhood connections to the River. 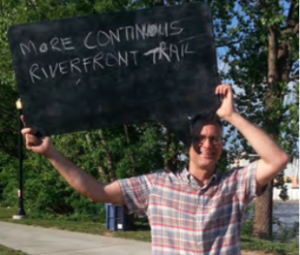 as the draw,” in the words of GR Forward. “We used to think of the river as a sewer. You just drove across it as fast as you could,” Tilma said. “Now there’s a different way of thinking about it—that’s invited in the GR Forward plan—that it’s this really vital recreational amenity and ecological resource. And so cars need to start thinking, as they approach the riverfront, that they’re in a special zone, where they’re not primary anymore.”

“We have this attitude of domination, and at some point we’re going to have to start sending a different kind of message,” he added. “We’re not taking away your personal freedom if you have to slow down a little bit in a few places. Changing the public’s attitude toward how we use that whole corridor—that can be done, and they’re thinking about that in [the GR forward plan], and that’s real visionary.”

A concurrent plan—to develop “water trails” in Michigan—runs parallel to the river trail development proposals. Just as the river trail is intended to connect cyclists and runners to a holistic regional network, recreationists and city planners alike hope that a water trail—a waterway amenable to recreation—will connect Grand Rapids kayakers, canoeists, and paddleboarders to water trails across the state.

“The State of Michigan is looking at all local municipalities up and down the Grand River all the way out to Lake Michigan for ways in which we can all work together to make those connections, create a system where one can conceivably get into the water over in Lansing and find a way, through Grand Rapids, out toward Lake Michigan,” said David Marquardt, director of Grand Rapids’ Parks and Recreation Department. “It’s pretty exciting.”

“I think it’s really a great opportunity for children, families, and school groups to be able to access this important waterway—to learn not only the skills of paddleboarding, or kayaking, or canoeing, but also to learn about the environment they’re floating through: be it different tree species, or bird species, or fish,” Marquardt said.

“I think it’s a great opportunity to get up close, one-on-one with the environment we’re in and learn about it—kind of a hands-on experience.”

“If we can build out the system to the capacity we think it’s ready for, we think that would be a huge attraction for new residents, new businesses—all the things we’re trying to achieve through GR Forward,” Kelly said. “That’s kind of the overall vision. If we can build up this trail system, we’ll have a world-class amenity right in our city, right downtown.”