The U.S. House of Representatives is considering legislation to discourage states from regulating ballast water more strongly than federal rules. 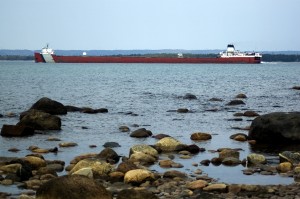 Debate this week came after the House Appropriations Committee on Tuesday approved a budget bill amendment that would withhold Environmental Protection Agency funding from any state that did so.

The other seven Great Lakes states have adopted the federal Vessel General Permit, which requires ballast water to be swapped before entering the Great Lakes – but it’s not 100 percent effective, Smith said.

Ballast is water used to stabilize ships. It has a history of introducing invasive species into the Great Lakes.

The restriction on EPA funding is a powerful disincentive.

“The Great Lakes are obviously in tremendous need of restoration money … [The amendment] would take away the state’s ability to protect its own water from invasive species,” Smith said.

Hal Rogers, the House Appropriations chairman, disagrees and said a number of amendments on the Interior Appropriations bill are to encourage economic recovery.

“This legislation is a great example of the hard but necessary work the Appropriations Committee is doing to get our fiscal house in order by cutting extraneous, duplicative and unnecessary spending,” Rogers said in a press release.

The House debated the bill Wednesday; floor action is expected the week of July 25.