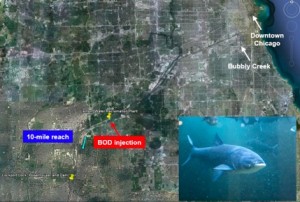 Researchers are eyeing a 10-mile stretch of canal between Lockport and Lemont Water Reclamation Plant to create a dead zone to stop invasives such as the Asian carp (inset). Image: Marcello Garcia, Donald Hey & Wei Liu of University of Illinois at Urbana-Champaign

An environmental evil elsewhere in the Great Lakes could help protect them from aquatic invaders, according to a team of researchers.

The team is studying how removing oxygen from part of the Chicago Sanitary and Ship Canal could stop Asian Carp and other invasive species from passing between Lake Michigan and the Mississippi River, said Marcelo Garcia, lead researcher with the Asian Carp study group at the University of Illinois.

Studies have recently identified 10 Great Lakes species lined up to invade the Mississippi basin, he said.  Harmful species like zebra mussels have already moved from the lakes and into the Mississippi watershed.

And Great Lakes communities are alarmed at the threat of voracious Asian carp moving the other way and establishing themselves in the Great Lakes.

The researchers hope that in conjunction with an electric barrier already in place, deliberately creating a “dead zone” could prevent ecological damage from invaders passing in either direction.

The U.S. Army Corps of Engineers is studying the feasibility of physically separating the water systems. But critics say that has huge economic consequences on shipping.

Pollution inadvertently causes such low-oxygen dead zones elsewhere. They are a particular problem in Lake Erie where they rob oxygen from other aquatic life and produce toxic algae blooms.

But in this case the researchers are looking at deliberately introducing wastewater from food processing companies. Such waste is rich in sugars, starch and carbohydrates. 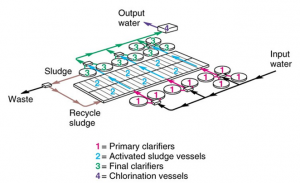 These would be partially treated – or fermented—to create a solution containing a plethora of oxygen-guzzling micro-organisms. That solution would be released into a 10-mile stretch of the canal connecting the two watersheds, Garcia said.

The impact is temporary.

The water also gets re-oxygenated as it goes through the turbines, gates and spillways at the end of the canal.

The technique is promising as a complement to other measures such as the electrical barrier that is now in place, he said.

But polluting the lakes even to save them is still illegal – it violates the Clean Water Act, said Joel Brammeier, chief executive of the Great Lakes Alliance, a conservation group for the lakes.  He’d only support a hypoxic zone in emergencies, favoring a physical separation as the permanent solution.

The advantage is that the action could be implemented quickly and without impeding barge traffic.

Though scientists and regulating agencies agree that a permanent separation of the basins is the only way of stopping invasions, that could take more than five years, according to Richard Sparks, senior scientist at the National Great Rivers Research and Education Center in East Alton, Illinois.

Meanwhile, interim measures are needed and a hypoxic zone is worthy of investigation because it is cheaper, non-poisonous and easier to run, he said.

An upside of a hypoxic zone is it will not cause a continuous fish kill. Fish eventually avoid the low-oxygen areas, according to Sparks.

And laws can be modified.

“The act is not cast in stone, it could be amended to create an exception to try and save the lakes,” he said.

Arguments against a dead zone have not dampened Sparks and his team’s enthusiasm.

The canal has never been a migratory route for native fish, according to Sparks.

It’s heavily industrialized with waste from petroleum, coal, road salt and electric generating facilities, he said. The only fish found there are under severe stress.

“So the question is, is it really important to sustain these stressed-out fish to the detriment of the entire lake system?” he said.  “Or does it make sense to sacrifice 10 to 20 miles of the canal to save the lakes?”

Unlike native species, most invasives are resilient and can endure the canal’s mucky waters, Sparks said.  It’s evident the zebra mussels, round goby and now the Asian carp have survived it.

Another advantage of a low-oxygen zone is that it controls a wider spectrum of aquatic invasives like disease organisms, algae, plants, invertebrates and parasites, according to areport published by Sparks and his team. 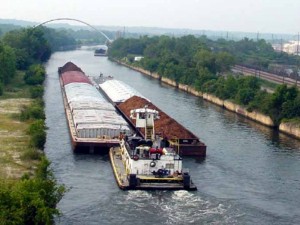 Section of the Chicago Sanitary and Ship Canal showing the electric barrier I (arc across the vertical rock walls) Image: Smith-Root

“It also doesn’t account for infant non-natives, eggs and larvae which can float through the barrier,” he said.

The barrier was installed in 2005 to repel the carp with electrical pulses. But the waterway is vulnerable to invasion when it malfunctions or is down for maintenance

Some water experts want multiple barriers to supplement it.

If it ever did get the go ahead, Sparks says it could be deployed in less than two years, if funding is available.

“What bothers me most is this fixation on the electric barrier and EPA refuses to look elsewhere,” said Phillip Moy, chair of the Technical Advisory Committee for the Invasive Species Barriers in the Chicago Sanitary and Ship Canal.

“The hypoxic zone could be another tool in the toolbox,” he said.  “Right now the box is empty.”