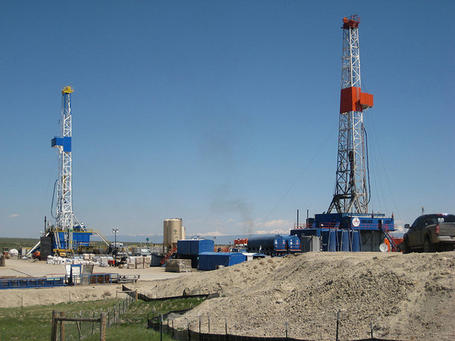 Plans by the Michigan Department of Natural Resources to auction off mineral rights in 23 counties in Michigan, including 4 in West Michigan, have renewed public safety concerns over the controversial practice of hydraulic fracturing, or fracking, to access natural gas trapped inside rock deep underneath the ground.

The auction will take place in Lansing on May 8. It will include public land in Yankee Springs and Gun Lake and 23,000 acres of land in Barry County, as well as land in Newaygo, Mecosta, and Oceana counties.

Fracking injects a mixture of water, chemicals, and sand into man-made wells that extend below the water table to force apart shale rock and extract natural gas. Fracking has come under increasing scrutiny from environmental groups, such as West Michigan Environmental Action Council, because of the health risks and environmental concerns widely associated with the process.

Reports suggest that there could be as many as 750 chemicals used in the fracking process, and while many of these chemicals, like citric acid and salt, are not considered environmentally hazardous, other substances, such as benzene and lead, are.

It should be noted that fracking isn’t new Michigan. It’s been around for over 30 years. But as Rebecca Williams of Michigan Radio’s “Environment Report” explains, what’s new is that advances in technology now allow wells to be drilled horizontally, and these horizontal wells have an even larger negative impact on the environment than traditional wells.

“But what’s new… is that drillers want to turn their drills and dig horizontally along the shale rock.  That makes the well site much more productive.  But it also uses a larger amount of chemicals and much more water – anywhere from a few million gallons of water to as much as eight million gallons of water per well.  After it’s used, that water is usually disposed of in deep injection wells.”

There are only two drill sites in Michigan engaged in horizontal fracking on an experimental basis, although there is currently no legislation stopping companies from drilling more.