Now Michigan officials want to bring them back in Lake Huron. But there’s a new concern – lake herring are highly susceptible to an emerging fatal fish disease.

Researchers found that lake herring are prime targets for Viral haemorrhagic septicaemia virus. It causes organs, skin and muscles to hemorrhage. The eyes of the sick fish bulge, they are covered by open sores and they eventually die.

The study didn’t examine why lake herring are vulnerable, but the slender schooling fish is more susceptible than the rest of the trout and salmon family to which it belongs.

The research is part of a larger catalog of the disease’s effects on Great Lakes fish, according to Martha Wolgamood, a manager with the Michigan Department of Natural Resource’s Wolf Lake State Hatchery.

“This way if there are fish kills or we want to do a surveillance, we know what species we should be targeting,” Wolgamood said.

Lake herring, once the principal food of many Great Lakes species, are of particular interest to state officials who want to bring them back to Lake Huron. Declining numbers of alewives, an invasive fish that competes with lake herring for food, has spurred the discussion.

“There are lake herring in Lake Huron, but at much smaller numbers than in the 1920s when a million pounds were caught per year,” said Gary Whelan, a fish production manager with the Michigan Department of Natural Resources and co-author on the study. “With the alewives declining, there’s a great opportunity.”

Chinook salmon that eat them and a loss of a zooplankton that they eat have caused alewife populations to drop, according to Mark Ebener, a fisheries assessment biologist with the Chippewa Ottawa Resources Authority.

Strengthening lake herring populations in Lake Huron is not a new concept. From 2007-2010, state officials caught, spawned and reintroduced the fish into Lake Huron.

The program wasn’t very successful, said Ebener who was part of the Lake Huron Technical Committee that planned to rehabilitate lake herring in Lake Huron. The program didn’t work well because of human error in the catching, fertilizing and transporting, Ebener said.

But he remains optimistic. 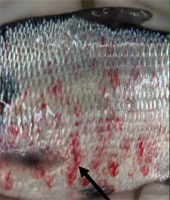 “Historically, all of the primary predators ate lake herring,” Ebener said. “Alewives are down and predators need some kind of prey and lake herring are perfect – small, silvery fish in huge schools.”

But now officials have to watch for a disease that could decimate them.

It’s not known how, or for how long VHSV has been in the Great Lakes. It was first confirmed in 2003 in a muskellunge from Lake St. Clair. But the fish wasn’t tested until 2005 – at that point the disease had been already found in Lake Ontario and Lake Huron. It has since been found in all five Great Lakes.

It hasn’t been as prevalent lately, but it’s still there, Whelan said.

“We barely detected it in our most recent Great Lakes surveillance, so if it’s in there, it’s low,” Whelan said. “But we did reconfirm diseased fish in Lake Michigan just outside of Milwaukee.”

Fish managers should take extra precautions when handling lake herring because of their vulnerability to the disease, Whelan said.

“The stocks would be more isolated because of their sensitivity,” Whelan said. “Managers would be more cautious in egg handling … use individual nets and waders specific to the Lake herring. We would just isolate them as much as we can.”

Knowing that VHSV profoundly affects lake herring will only further support an effort that is well worth undertaking, Ebener said.

“We need to move towards something more sustainable in Lake Huron instead of relying on non-native prey,” Ebener said. “Restoring lake herring would give the lake some resemblance of what it used to be, which should be the goal of the state agencies.”

Lakes Michigan and Huron Have Hit All Time Low

What About the Fish?
0 replies