Michigan officials are seeking a federal exemption to use an unregistered pesticide on up to 10,000 acres of apples trees that are susceptible to a deadly disease.

The bacteria causing the disease have grown resistant to current treatments.

The spray-on fungus killer, kasugamycin, would control fire blight, which has been on the uptick in Michigan orchards the past few springs. 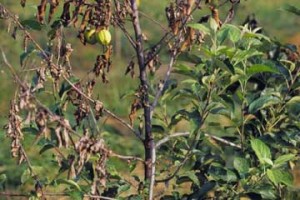 The bacterial disease attacks apple and pear trees’ blossoms, shoots and limbs. Branches, leaves and trees look scorched when infected. The disease is sporadic, hard to control and usually attacks in the spring.

“Fire blight is just so detrimental,” said Nikki Rothwell, a district horticulturist with the Northwest Michigan Horticulture Research Center. “It comes during the bloom, bacteria builds up in flowers and rain can flush it out and cause an infection.”

Kasugamycin is an antibiotic and would kill the bacteria. For years apple trees have been treated with a different antibiotic, streptomycin, but the bacteria are growing resistant to it.

“We used streptomycin for many years and had great success,” Rothwell said. “But we’ve gone out and sampled a lot of orchards and in most places it’s no longer doing its job.”

There is worry that, if untreated, fire blight could decimate the state’s apple production.

“In Michigan a lot of apples are grown at very high densities, so it’s feasible for fire blight to wipe out an entire orchard in one season,” said Jennifer Holton, public information officer with the Michigan Department of Agriculture.

Holton said that the department has requested and received the exemption the past three years.

The request entails no more than three applications of the pesticide, on no more than 10,000 acres between April 1 and May 31, 2012. The maximum amount sprayed will be approximately 30,000 gallons.

Fire blight primarily affects southwest and northwestern Michigan and, if allowed, will only be used in 10 counties in those regions.

Registered pesticides are those that the EPA has tested for human and environmental effects, after which the agency provides directions for use. Kasugamycin isn’t registered, but, according to an EPA primer, the chemical is not known to be toxic or cancerous.

While the EPA would not comment on why kasugamycin is not registered, Rothwell believes it’s because there’s fear of approving antibiotic fungicides.

“I think there’s hesitancy about giving people carte blanche to use it because of bacterial resistance,” Rothwell said.

Bacteria evolve and grow resistant to fungicides, which causes worry that the bacteria could infect humans and resist our antibiotics.

“Bacteria don’t care if it’s a tree or a person … the resistance can be passed,” Rothwell said.

However, there is less worry with kasugamycin since it isn’t used in human medicine, Rothwell said.

According to David Wade, the director of the division of environmental health at the Michigan Department of Community Health, the method and timing of the fungicide spraying renders it almost entirely harmless for humans.

“The application precedes harvest by quite a large amount of time,” Wade said. “By the time apples are harvested, the fungicide is below levels of detection.”

While fire blight has torched farms throughout the Great Lakes region, no other states have requested use of kasugamycin. Wade said for the exemption to be granted, the EPA must determine that there’s insignificant risk to humans.

But safe doesn’t always mean successful. The bacteria could eventually grow resistant to the new fungicide as it did with the old, but that’s just the nature of battling diseases, Rothwell said.

“It’s like an arms race between us and the bacteria,” Rothwell said. “It gets ahead and grows resistant … we get ahead … it just keeps going.”

And for farmers, the arms race-style battle can prove frustrating.

“Well, last year we used agrimycin (a streptomycin fungicide) … it’s only good for so many hours and it rained for three days straight,” said Don Gunderson, owner of Westview Farm in southwestern Michigan.

“Last year it affected pretty much every farm in the area,” Gunderson said. “People are just scratching their heads.”

The EPA is accepting public comment on the request for exemption until Feb. 6.