While most home sellers look for Realtors, some may also have to stop at their local health department. 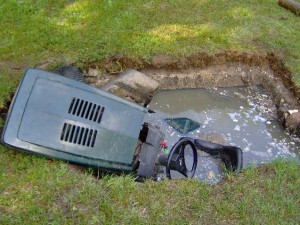 In a growing number of areas, homeowners cannot sell their homes without a clean bill of health for the septic tanks that drain and dispose their human waste.

Failing tanks are becoming common, said Geoff Snyder, the Jackson County drain commissioner in south central Michigan.  And the problem is getting too large to ignore.

Time of Sale or Transfer Program

Now some local authorities are enforcing regulations to ease the situation one property sale at a time:

Three years ago officials of Barry-Eaton counties implemented ‘the time of sale or transfer’ program which requires a thorough inspection of septic systems before property can be sold.

Only those meeting local health standards can be sold.

“We did this to protect public health and the quality of our environment,” Pessell said.  “We knew we had a huge pollution problem caused by failing septic tanks which were not getting reported for various reasons.”

An authorization to sell property can also be issued if the owner of a failed system can guarantee repairs later.   Failures can also be contested at an administrative hearing.

Health officials have been more than surprised at what they have discovered since the program begun, he said.  “There’s a lot of failing sewage systems – a lot of leaking septic tanks.” 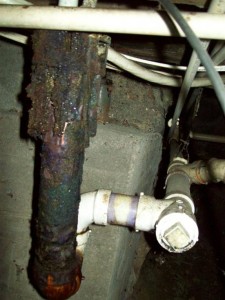 Plumbing from a system that is backing up waste. Picture: Barry-Eaton District Health Department

But that’s just a fraction of the bigger picture.

The county has stopped and corrected nearly 33 million gallons of untreated discharge flowing into lakes, streams, drains and other surface waters. Officials suspect this is just a third of the problem.

The regulation has created business for evaluators and increased demand for septic pumpers and related service providers, according to the counties.

But not everyone is happy.

“Whenever you have government regulations that make it difficult to buy homes, homebuyers are inclined to look elsewhere,” said Michael Delaware a local real estate salesman.

The regulation has made it tougher to sell foreclosed homes, he said.

“The banks will not bear the cost for septic repairs which is then passed down to buyers who are now shying off from foreclosed property,” he said.

Pessell said Michigan’s septic tank pollution needs tougher measures because “very many people will only do the right thing if they are made to.”

About half of the evaluated systems in both counties lack county records meaning they were unauthorized and have not been subject to the counties’ inspection requirements.

“People just install a tank and a spider web of pipes leading to road ditches and rivers,” he said.  “They feel safe cause when they flush there’s no backup.”

“Until the regulation was passed, we just didn’t have any way of knowing what systems are out there and how they are functioning,” he said.

How many septic tanks are out there is impossible to estimate. There are no central records and many are not recorded because they were installed without authorization.