Even with one of the tightest mercury emission regulations in the country, some Illinois environmentalists are frustrated over increasing pollution.  They say that neighboring states lack the same strict regulations for keeping the brain-retarding chemical out of the air.

Illinois suffers out-of-state mercury pollution from smokestacks which emit dangerous levels, according to a recent report by the Environmental Law and Policy Center in Chicago. 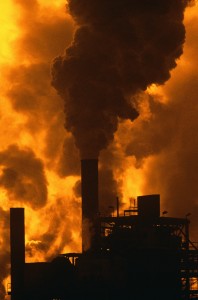 Earlier this year, the federal agency proposed national standards for mercury and other air pollution, its first ever to include power plants.

The standards will require power plants to install “proven” pollution controls to reduce mercury, lead, acid gases and other substances associated with health problems, according to the agency.

The agency recently extended the public comment period to August 4, 2011.

U.S. Rep., John Dingell, D-Mich., has asked the agency to extend the comment period by yet another 30 days, Bloomberg reports.

But the agency maintains November as the deadline for issuing the final standards which will be phased over three years, with a possible extra year.

The party intends to delay the compliance period to address whether technology to meet the new standards is available, Whitfield said.

EPA’s new proposal is a response to petitions filed by numerous states against the Clean Air Mercury Rule of 2005. The states and some environmental organizations found it insufficient, said Enesta Jones, press officer at the U.S. EPA.

EPA says the proposal will do more than just keep the air and water clean.

The standards, touted as one of the strongest health protections from air pollution since the Clean Air Act, are likely to provide more health-care savings to the nation than they will cost industries to adapt, according to the federal agency.

The agency has recently released a new rule, Cross-State Air Pollution Rule, to address the emission of the toxic sulfur dioxide and nitrogen oxide in 27 eastern states through the mandatory use of “widely available, proven and cost-effective control technologies”, according to the agency.

The agency expects to cut sulfur dioxide emission by 73 percent and that of nitrogen oxide by 54 percent in the next three years.  These gases have been linked to widespread respiratory illnesses and premature deaths.

Largely released from coal plants, the element can impair mental development and nervous systems of people and animals, according to the U.S. Center for Disease Control and Prevention.  Children under 15, pregnant women and women of childbearing ages are especially at risk.

The disease control agency says that about 10 percent of babies are exposed to excessive mercury in the womb.   Children can suffer mental retardation, cerebral palsy, deafness, blindness and other health problems when their mothers consume fish tainted with mercury while they are pregnant.

Coal plants and companies that use mercury should install mercury pollution control equipment to protect children’s health and the environment, Howard Learner, the executive director of the group that issued the report, said in a press release.

Coal-burning power plants are the largest human source of mercury in the air, emitting an estimated 43 percent of all mercury found in the air, according to the federal agency.

Illinois is one of 18 states with mercury standards stricter than the federal guidelines, according to the Congressional Research Service which provides policy and legal analysis to the U.S. Congress.

The state required power plants to reduce emissions by 75 percent in 2009 and 90 percent by the end of 2012. The rules would also prohibit the trading of emission credits, according to the Illinois Environmental Protection Agency.

Most of these new state rules are to counter a 2005 federal rule that was criticized by environmental groups for de-listing coal plants as a source of mercury emissions and for its inability to make timely and sufficient mercury reductions.

The critics condemned it for overlooking the need for clean fuel technology in industries by adapting the market-based cap-and-trade program instead of ensuring the best technology in pollution control, according to the Illinois EPA.

Tool to measure levels of mercury in the air

“This will provide a tool to find out if rules like those established by the EPA are effective,” said Anna Soehl, project manager of the Great Lakes Commission, an inter-state agency committed to conserving the Great Lakes.

Soehl said her team is happy about the new proposal by the EPA because it would ensure that all states are following similar mercury controls.

“It’s tough to control your state’s mercury emissions when other states are not doing the same – it’s very ineffective indeed because air doesn’t obey boundaries,” she said.

For a chronology of EPA’s regulatory and legal processes leading up to the current proposal, click here.

There is a teleconference by the Environmental Protection Agency’s Science Advisory Board Mercury Control panel 1 p.m. to 4 p.m. Eastern Daylight Time on July 20. It is open to the public.