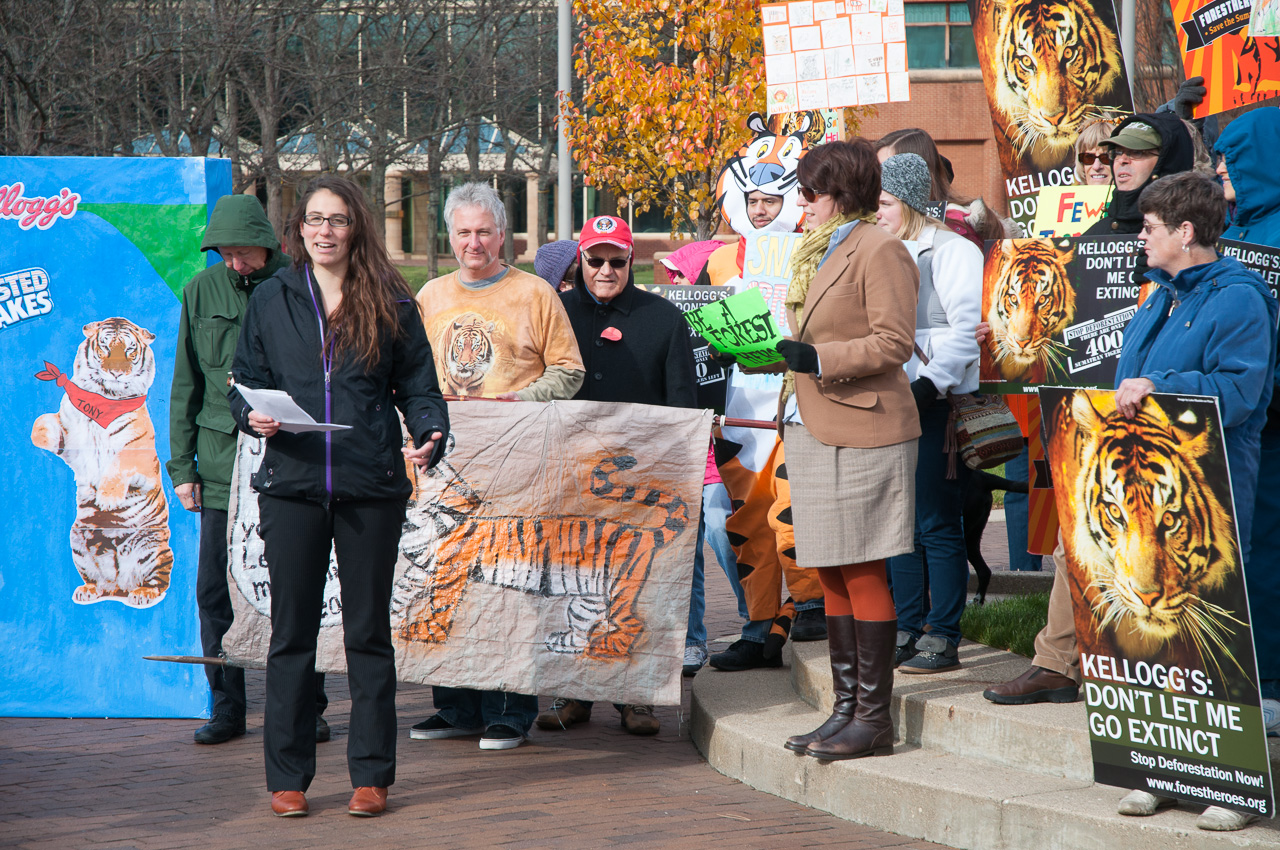 On Wednesday, WMEAC and Forest Heroes teamed up with families, consumers, and other Michigan community leaders to deliver a powerful message to Kellogg’s. Scores of demonstrators rallied outside the “big cereal bowl” to protest the Kellogg Company’s partnership with notorious deforester Wilmar International. The Asian agribusiness giant’s palm oil operations destroy precious rainforest and threaten the existence of the Sumatran tiger, of which only 400 remain today.

According to a press release from Forest Heroes on the event, over 5,000 petitions and letters addressed to Kellogg’s were poured from a giant cereal box to a similarly large bowl and delivered to the multinational corporation’s Battle Creek headquarters. Forest Heroes also delivered a sign-on letter from 100 leading Michigan opinion groups as protesters dressed as Tony the Tiger and sporting signs and banners cheered on. The event concluded with a small group of organizers and community leaders going to meet with Kellogg’s Vice Presidents of Sustainability and Communications.

The rally also featured a press conference with numerous influential speakers, including WMEAC Director Rachel Hood. “We know Kellogg’s cares about these issues, and we urge them to be a true Forest Hero,” said Hood. “It’s time for Kellogg’s to reject these destructive business practices.”

Local and national press caught wind of the developments in Battle Creek, and the rally has since been covered in not only WWMT West Michigan and the Battle Creek Enquirer but TIME and the Washington Post, amongst others, who picked up the story from the Associated Press. Newspapers that specifically quoted WMEAC Director Rachel Hood include the Miami Herald and the San Francisco Chronicle.

For a complete recap of the rally, more information about the campaign, and ways you can help, visit the Forest Heroes campaign website.

Women in the Environment: Wangari Maathai and the Green Belt Movement A Watershed Moment (Repeat): Going Local
Scroll to top