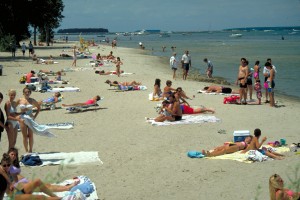 Beaches found with high levels of E. coli bacteria can cause sickness in swimmers. Ohio beaches were ranked second-to-worst in the nation, according to the NRDC. Image via the EPA.

Great Lakes states once again dominated the bottom of a beach health and safety list released by the Natural Resources Defense Council before July 4 weekend.

The region placed in the bottom two-thirds of the list in 2009; this year’s findings show little improvement.

Minnesota fared the best out of Great Lakes states in 2010, coming in at number 11 with its beaches exceeding the national standard of safety five percent of the time. It jumped ahead one spot from 2009.

Ohio ranked the worst, coming in a number 29; the state exceeded the national standard 21 percent of the time.

Wisconsin dropped six spots to the bottom two-thirds of the list this year. 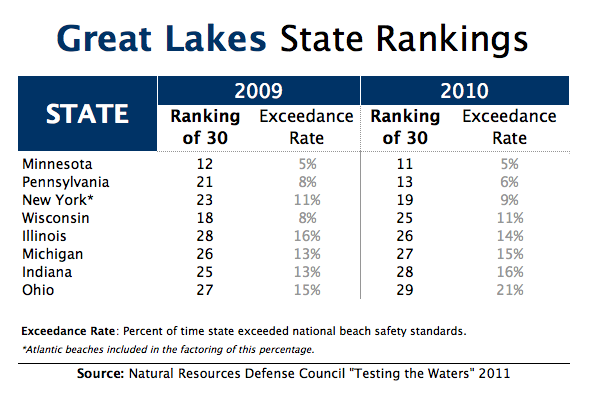 “We know that some of the Lake Erie beaches have bacteria problems and that’s why we conduct sampling so frequently at the most popular bathing beaches,” she said.

But Shannon Briggs, a toxicologist with Michigan’s Department of Natural Resources, said the council overlooked a number factors when it drafted the report.

For instance, the report measures beaches against the national standard for the amount of bacteria allowed in water. A sample with more than 235 Escherichia coli colonies per 100 milliliters of water is dangerous to swimmers’ health. E. coli causes human sickness such as cramps and diarrhea.

But Michigan measures its beaches based on a standard of 300 E. coli, not 235. According to Briggs, the difference is too microscopic to matter.

“The thing about E. coli is these things grow and die exponentially,” she said. “To pretend that 235 is significantly different than 300 is a leap. The NRDC dismisses our state standards and calculates our data based on standards that they choose to use.”

Another flaw is that Michigan’s beach data, like other Great Lakes states, is on a tiered system, Briggs said. That means dirty beaches, ranked at tier one, get extra monitoringattention.

“The funding provided for monitoring beaches in the Great Lakes is designed so that the state has to rank their beaches based on a tiered system. There’s a tier one, two and three,” she said. “Obviously there’s not enough money to monitor all beaches.”

The result is multiple samples and testing data for the dirtiest beaches and no data at all for the cleanest, because the states can’t afford it. The council failed to take this into account when it accumulated data for the report, Briggs said.

“When the NRDC comes along and looks at state summaries, the beaches in the Great Lakes have been highlighted so our data is going to be reflecting the contamination,” she said. “The Great Lakes states are being responsible. We’re highlighting the beaches with problems. We don’t have enough money to monitor the good beaches because they’re good; they don’t have a problem.”

Illinois experts also disagreed with aspects of the report.

The primary source of beach contamination in the state is not always runoff, said Justin DeWitt, chief of general engineering with the Illinois Department of Public Health.

“We’re not in agreement that runoff, especially stormwater, is the primary source — which is kind of what they seem to indicate,” DeWitt said. “We’re much more focused on looking at things like geese and gulls. We think that’s the primary source of E. coli, and we think the executive summary [of the report] misses all of that. It says beaches are polluted and no one is doing anything.”

DeWitt added that it’s unfair to compare the health of Great Lakes beaches with the health of coastal beaches, due to the differences in ecological sensitivity.

“If you talk to any parks in Great Lakes states they may have pointed out it’s a bit lopsided to put Great Lakes in with coastal beaches,” he said. “Our dynamics are significantly different than beaches that are on salt water. While you may say dirty is dirty — and I’d probably agree — to compare the two is apples and oranges.”

The report also named repeat offender beaches — beaches that had frequent problems with contamination and exceeded health standards more than 25 percent of the time from 2006 to 2010.

Following the results of last year’s report, critics say the report emphasizes percentages and numbers, instead of recognizing that Great Lakes beaches test their beaches on a highly regular basis — some as many as every day of the week.

Although there are practices that can impact the rate at which a state exceeds the national standard, but the frequency of sampling is not one of them, Devine said.

“Typically more frequent routine monitoring might result in more or less closing or advisory days, but shouldn’t typically change the percent exceedance rate,” he said. “Some states or beach managers do have proactive responsible policies of testing near outfalls or testing immediately after a storm event that is likely to lead to contamination. Those kinds of things can affect their rate of exceedance.”

The point of the report is to encourage frequent testing and inform the public, said David Beckman, the council’s water program director.

“One of the flaws of testing across the country is that it’s a function of the science and technical limitations,” he said. “Each test is taken on a beach on Saturday and takes 24 or 48 hours to get the results, which means you can have a whole weekend full of people using the beach and find out Monday morning — after it’s too late — that the beach had unsafe levels of bacteria.”

The report did note that rankings and percentages, while indicative of contaminated water, are not intended as an indication of the success or failure of a state’s beach monitoring program.