A long-banned pesticide remains in the Great Lakes environment but is on the decline, scientists say.

Toxaphene was a heavily used pesticide in the U.S. until people realized how toxic it was in 1982, the year it was banned in the Great Lakes region and most other places. It was banned nationally by 1990. Toxaphene mostly came to the Great Lakes on winds from the South where it was used heavily in agriculture.

The pesticide breaks down slowly and accumulates in the fatty tissues of fish and other wildlife, so it’s remained in the Great Lakes long afterwards.

However, slowly but surely, the contaminants are going away.

Researchers examined toxaphene in the Great Lakes and found that between the mid-1970s and the mid-90s, concentrations in fish decreased rapidly. Since the mid-90s decreases have been slower, but the downward trend continues.  The study is in press at the Journal of Great Lakes Research.

Researchers analyzed lake trout from every lake except Erie, where they used walleye, to determine toxaphene levels. Concentrations were highest in Lake Superior and lowest in Lake Erie.

The chart below shows toxaphene concentrations (in nanograms) in whole fish in 1977 (1980 for Lake Ontario) and the 2009 levels. (Data: Toxaphene trends in the Great Lakes fish) 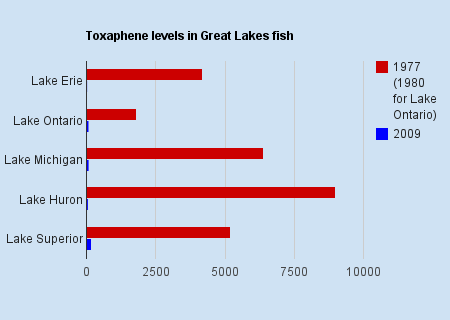 Lake Superior has always had the highest concentrations.

“Lake Superior is bigger and colder, so when toxaphene came to the Great Lakes through the air, it was attracted to the lake,” said Thomas Holsen, professor of civil and environmental engineering at Clarkston University and co-author of the study.

While its size gives toxaphene a larger target, the cold water doesn’t release the chemicals as gases very quickly.

Holsen said toxaphene “cycles around the globe” so now that the Great Lakes are purging the chemicals, they’re heading elsewhere.

“In the Great Lakes, the out arrow is bigger than the in arrow right now,” Holsen said.

But since the chemicals are world travelers, those arrows can change direction quickly. AsEcho reported, after the official ban in 1990, the lake’s toxaphene levels continued to rise for a few years.

But, even in the biggest, coldest and deepest lake, the overall trend has been positive. From 1990 to 2009, toxaphene levels in Lake Superior’s lake trout have decreased approximately 86 percent.

There are no legal uses of toxaphene in the world, according to Holsen.  Eventually, the chemicals will break down.

Toxaphene can damage people’s nervous system, livers, kidneys and cause death, according to the Agency for Toxic Substances and Disease Registry. Animal studies have also proved it cancerous. People can be exposed by breathing it in, touching it or drinking contaminated water. But most people are exposed by eating fish. A recent analysis of Great Lakes fish advisories recommended that contaminants like toxaphene be added to advisories.

All Great Lakes states have fish consumption advisories, but not all test for toxaphene. There are a few labs in the region that test for it. 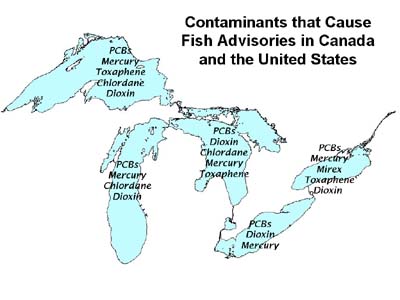 The feds list toxaphene as a contaminant that can cause fish consumption advisories, but not all Great Lakes states test for it. Photo: EPA

Wisconsin does not, said Candy Schrank, aquatic toxicologist with the Wisconsin Department of Natural Resources.

“In Wisconsin, we do not issue advice on toxaphene,” Schrank said, referencing the fish advisory program. “We did test for it at one time when it was still used, but there are a lot of people skeptical about the testing methods.”

Toxaphene is difficult to test because it’s a mix of more than 670 chemicals.

Michigan tests for toxaphene in Great Lakes waters, said Joeseph Bohr, aquatic biologist with the Michigan Department of Environmental Quality. But it’s not a major concern.

“It’s included in our standard testing,” Bohr said. “But it doesn’t meet the criteria to ever issue consumption advisories.

Bohr said mercury and PCBs are what almost always drive the fish consumption warnings in Michigan.

Toxaphene testing has been considered by the Great Lakes Fish Consumption Advisory Consortium, a group of officials from all eight Great Lakes states.

Nothing has been finalized in those talks, according to Pat McCann, fish advisory program manager with the Minnesota Department of Health.

A review of all of the states’ fish consumption advisories by a research department at Cornell University prompted the authors to suggest potentially adding some contaminants, like toxaphene, to advisories. McCann said a consortium-wide advisory on toxaphene is unlikely since it’s mostly an issue now in Lake Superior.

Although more slowly in Lake Superior, the harmful chemicals seem to be fading from the Great Lakes environment, perhaps becoming a greater problem elsewhere for a while.