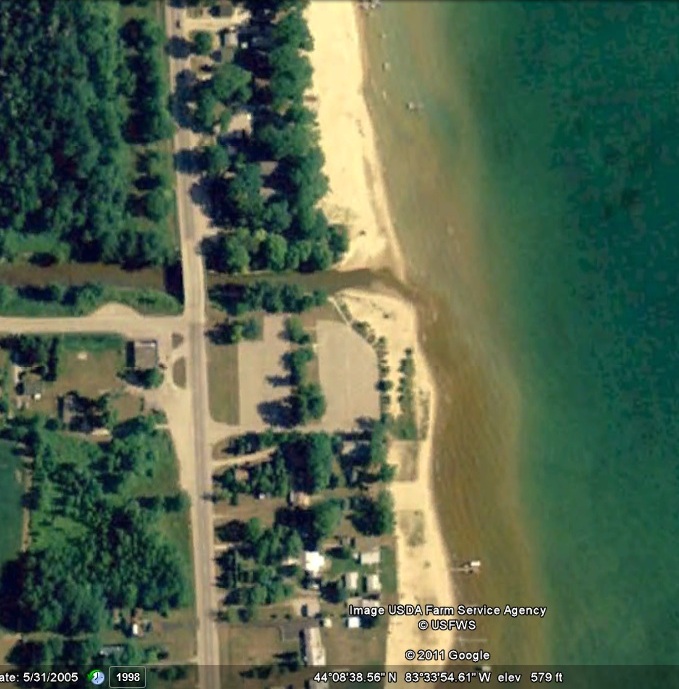 County health officials are struggling to discover the source of sporadic and elusive high E. coli bacteria counts in the water at a beach near Lake Huron’s Tawas City in Michigan.

Weekly sampling at Singing Bridge Beach has disclosed intermittent violations of state water standards for years. In 2010, the Arenac County Health Department warned people to stay out of the water on eight occasions

“It’s our job to improve public health and prevent any potential illnesses that could be created from those unsafe water samples that we get at the beach,” said health department director Michelle Patton.

The task of detecting different types of bacteria to identify pollution sources is like solving a crime. Bacteria is found naturally in surface waters, Patton said. But adding to that load can cause gastrointestinal problems and eye, skin, urinary tract and other infections. E. coli is an indicator of other potential disease-causing germs.

“If you get more than 300, that beach should be either closed or an advisory posted that (the water’s) above that state standard for total body contact or swimming,” Patton said.

At times in 2009 the samples weren’t even low enough to reopen the beach. Health authorities warned swimmers to stay out of the water from late June to early October. 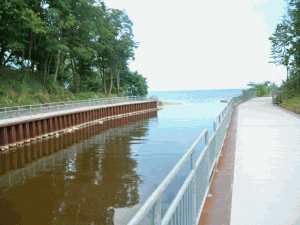 Patton suspects a county drain, called the Whitney Drain, may be part of the problem. The drain discharges water into Lake Huron. It was built in the 1930s to prevent flooding in the town of Au Gres.

Water was rerouted at a 90-degree angle on the county line between Arenac and Iosco Counties to flow into Lake Huron. It now drains water from both counties and Ogemaw County.

County drain commissioners and officials reconstructed the drain in 2008 in response to concerns that soil erosion in the drain was polluting fish habitat in the drain’s outsource—Lake Huron.

“They rebuilt the drain and they put in some rip rap and some stone across the drain to slow down the flow and to try and trap some of the sedimentation before it got out the mouth of the drain,” Patton said.

But Patton said the improvements may be the reason for the contamination setbacks—sampling indicates the drain is the most likely suspect and Patton said they couldn’t identify any other changes to the beach.

In 2010, the health department sampled water from Singing Bridge Beach and the Whitney Drain. The U.S. Geological Survey analyzed 21 samples from the beach and 17 from the drain for E. coli, salmonella, shigella, campylobacter and staphylococcus.

“We did detect some genes that might indicate a bovine source, however I would emphasize that that also could come from other ruminant animals and that includes deer,” said research microbiologist Sheridan Haack. Bovines—cow or oxen—are part of a larger group of plant-eating mammals like deer, goats and sheep called ruminants. Haack said this group of genes could belong to other members of these groups.

Haack also said the testing didn’t  measure toxicity or concentration—only whether a bacteria type was detected.Different sources may be the reason for high bacteria counts on different days.

Any number of factors could lead to detection of E. coli and other bacteria, she said. It could be from gulls or other wildlife or  human pollution—possibly from a leaking septic system from one of the nearby homes or contributions from the Whitney Drain.

“Our findings will probably say that all of those sources are present,” Haack said.

But naming bacteria is only part of identifying the culprit.

Surveys help the health department assemble a list of suspects along with bacteria sources for different days.

“Part of determining the sources is understanding the environmental conditions that were present when the samples were taken,” Haack said.

Samplers record wave conditions, algal beach buildup, litter and debris, numbers of visitors on the beach or in the water, numbers of gulls and dogs, whether fecal matter is present, possible sources of pollution or contamination in addition to E. coli counts. 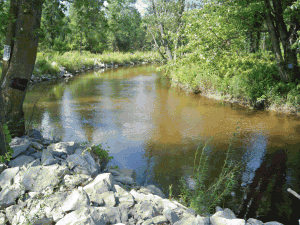 The study may help county, township and health department officials determine the possible sources of contamination for the beach.

Haack said the U.S. Geological Survey will work with the health department this summer to identify points on the Whitney Drain and its headwaters where bacteria counts are highest, then try to identify sources.

“If the question is the E. coli bacteria, it’s probably not unreasonable that Whitney Drain might have some high bacteria counts,” Haack said. “Particularly some of the more recent work that has been done there may hav

e disturbed riparian zones or other areas that would normally filter bacteria out of the water as they’re coming across the land.”

Freshwater Wind Farms and Fertilizer Runoff: Which is the real threat to fish?

With 20% of the Worlds Fresh Water, How Does Michigan Protect Against Microplastics?

PWIR: Time to get strict about “no stricter” legislation
0 replies

Rachel Hood, executive director of WMEAC, delivers commencement speech at West... Avoid the Plague of Devil Duckies by Not Using Chemical Fertilizers on Your...
Scroll to top