Detroit is investing in its waterfront roots. 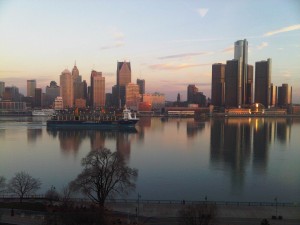 Detroit is revitalizing its waterfront for public use. Photo: Mark Burrows

The city opened a $22 million public dock and facility in July to attract a once thriving cruise ship industry and bring its economic focus back to water.

“There’s an active interest by both Europeans and people all other the U.S. to tour the Great Lakes on cruise ships,” Jamian said.

Detroit isn’t the only Great Lakes city luring businesses with the region’s most abundant resource.

Milwaukee offers half-price water rates to businesses what can bring jobs to the area. And a Michigan economic developer sees potential in water technologies.

“All of our cities really recognize the value and attractiveness of the water supply we have,” said David Ullrich, executive director of the Great Lakes and St. Lawrence Cities Initiative, which represents more than 81 regional mayors from the U.S. and Canada. “It’s part of the whole economic and social fabric.”

With employment five percent lower than before the recession, the largest Great Lakes metropolitan areas are growing more slowly than the rest of the country, according to the Brookings Institution in Washington D.C.

Can the water advantage boost economies? Great Lakes cities are giving it a try.

Milwaukee’s new water rate cuts prices in half for water-reliant businesses that create and retain 25 jobs for five years.

More than just a move for economic development, the city’s water works department launched the program in June because it was operating under capacity, said Carrie Lewis, superintendent of the Milwaukee Water Works.

“We have a lot of excess water capacity. That’s why we thought about doing this,” she said. “If more large customers could move into the service area, then they would better utilize the excess capacity of that and all the rate payers would benefit.”

“Any business that might take advantage has to use best management practices and best water efficiency practices,” she said. “None of the water that can be qualified for the rate is cooling or irrigating to make sure water is not wasted.” 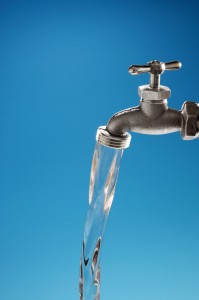 “The result is we have a lot of fixed costs for maintenance and repair and financing but a lot of them find they have demand that is way under capacity,” he said. “If they don’t have customers to cover those costs, that drives the rates up in residences and normal businesses that are not heavy users.”

Other states, such as Ohio, have tried to use water as a businesses incentive.

Ohio Gov. John Kasich vetoed the controversial legislation in mid-July. Environmental groups and certain lawmakers worried the weak protections were out of compliance with a compact to protect regional waters.

But the 2008 Great Lakes Compact is far from a disincentive to use the resource, said National Wildlife Federation attorney Sara Gosman during a telephone conference.

“Users must adopt conservation measures that are both environmentally and economically feasible,” Gosman said. “It strikes a careful balance between long-term sustainability… and economic growth — both of those things can happen together.”

“We followed Israeli economic development around water and launched an initiative about a year ago,” he said. “The focus is not on water itself, but water technology…. We feel that it differentiates us from our competition.”

This strategy not only offers water as an incentive, but also allows for technological development companies to come to Michigan, he said.

“Our biggest gap now is how to bring innovation to implementation,” he said.
Water technology can also involve finding environmentally-friendly ways to use water, Pezza said.

“In Michigan, we’re very concerned and protective of our surface water and clearly, if you don’t protect it as a resource, you can’t use it as a commodity either,” he said.

“We have started some pilots and the resolution of which, some of them are successful and translating into jobs,” he said. “For example, we have one Norwegian company that’s just here to do a pilot in Grand Rapids and Israeli companies are doing water demand management and looking for sites to locate their office.” 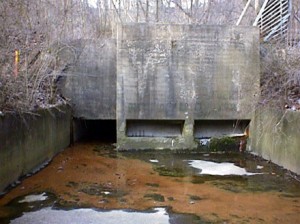 Economic improvement may come from investments in technologies that improve sewer overflow problems like this one in Akron, Ohio force. Photo: City of Akron

Economic improvement may also come from investing in technologies that treat water after it’s been used.

Local governments spend $8.1 billion every year on pipes and treatments plants that carry and treat wastewater, according to a 2010 report by the Great Lakes Commission.

The report highlights a lack of federal funding for wastewater treatment improvements and green technologies, which could eventually reduce costs over time.

Last year, Ontario pledged to invest $30 million over three years to develop its $1.8 billion water industry. The Canadian province hopes to become a hub for innovative water technologies to treat problems like combined sewer overflows, which occur when rain overflows sewers and sends untreated wastewater into rivers and lakes.

“All of our cities are looking for better ways to manage stormwater and treat wastewater,” Ullrich said. “The biggest and toughest thing is dealing with combined sewer overflows — all are challenges and opportunities.”

Wrapped Up: Recycling Bubble Wrap A Day at the Farmer’s Market
Scroll to top