The winding, narrow road between Big Bay and Marquette in Michigan’s Upper Peninsula is usually plied by tourists, Northern Michigan University college students and locals – likely on their way to snowmobile, cross-country ski, fish or kayak in the cobalt blue waters of Lake Superior or the surrounding woods and wetlands.

But now residents, elected officials and business owners are worried and angry that these pleasant scenic roads – sometimes icy and treacherous in winter – could be widened and reinforced to support an endless stream of trucks carrying equipment and ore to and from the mine that Kennecott Minerals is in the process of opening on the Yellow Dog Plains near Big Bay.

In January Kennecott suffered a major blow when the US Environmental Protection Agency ruled, after a meeting with various government agencies, that Kennecott cannot construct the new Woodland Road it had proposed through wetlands and forest from the mine site to a reopened ore mill about 22 miles away. Kennecott had invested $8 million over five years in preparing to build the road. It had starting last spring cleared the mine entrance – at Eagle Rock, which local tribes consider sacred – on the presumption ore expelled from the mouth could be trucked conveniently to the mill where millions of dollars worth of nickel and other metals would be extracted.

Kennecott, a subsidiary of the London-based mining giant Rio Tinto, has also been considering greatly expanding a seasonal logging road, known as county road 595. In January it announced it had dropped that plan because the permitting process would take too long and locals were concerned about the environmental impacts on surrounding forest. The company announced it would seek to use the aforementioned existing road through Marquette.

But Marquette Mayor John Kivela said he has “zero intention of allowing trucks through Marquette.” Kivela strongly supports the Eagle Project in general, saying “the Upper Peninsula’s identity has always been about mining, and it still is.” He said Kennecott officials told him in a February meeting that they are still pursuing permits for county road 595. Much as he thinks the mine will create jobs and needed economic stimulus, if Kennecott tries to bring about 80 mining trucks a day through “the heart of Northern Michigan University campus” – where President Obama spoke on Feb. 13 – it will be a deal breaker.

“I was elected to support the residents of Marquette, not a foreign company,” he said. “It all comes down to money, there are other routes they could take. Of course they want to spend as little as possible, but that’s not my responsibility.” 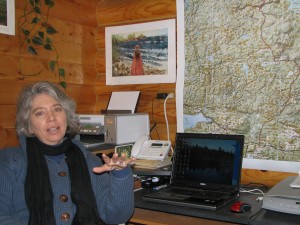 Cynthia Pryor says “things will never be the same here” once the Kennecott mine is built. Photo: Kari Lydersen

expands, and from the project as a whole.

“This place will never be the same,” said Pryor, who has been organizing against the proposed mine for a decade.

Pryor said opposition to the mine has been increasing lately as people who were enticed by the promise of jobs and tax dollars are growing increasingly concerned about the road issue, increased electricity rates related to the mine and other impacts. She said the fact that Kennecott began clearing the mine site and developing electricity infrastructure before a road to the mill was in place is increasing residents’ skepticism of the company.

“People are starting to see how Kennecott is trying to push things through under the carpet without doing it the right way,” she said. “Now they are building a mine out there and they don’t have a transportation route to it – what kind of business plan is that?”

The mine would tap into sulfide ore which produces sulfuric acid when exposed to oxygen. Among the multiple environmental and quality-of-life impacts of the mine, opponents are furious that it could contaminate their beloved pure waters. Residents drink right out of the cold clear streams, the lush wetlands are alive with countless groundwater “seeps” and the area is the headwaters of the Salmon Trout, an acclaimed fishing river that flows into the nearby vast blue expanse of Lake Superior.

Even if copper and other metals or contaminants mobilized by the mining process remain within drinking water standards, notes Pryor, that still could mean levels exponentially higher than current content.

Kennecott has promised jobs and general economic stimulation, winning significant support from business leaders, local residents and elected officials in the economically-depressed area. The mine is predicted to produce 300 million pounds of nickel and 200 million pounds of copper along with some other metals over its 20-year lifetime, making it the country’s largest nickel mine. Company officials peg its economic impact at $350 million, with production slated to begin in late 2013. (Kennecott did not respond to a request for comment.)

Pryor and other opponents have sought to block the mine through lawsuits, public campaigns, lobbying elected officials, protests and even an occupation by members of the Keweenaw Bay Indian Community tribe. Pryor and tribal members have been arrested in the past year near the site. Tribal member and environmental activist Jessica Koski flew to London last summer to testify at Rio Tinto’s shareholder meeting.

Opponents hope the decision on the road signals government officials may otherwise intervene in the case. Previously, the U.S. EPA had decided Kennecott did not need a federal groundwater permit to proceed, a decision that disappointed opponents who felt like the federal government was giving a free pass to the mining company. Before that decision came down, documents published in 2009 by the National Wildlife Foundation revealed Kennecott had been ignoring the EPA’s requests for information for three years and proceeding with development as if no permit was needed.

The Michigan Department of Natural Resources in 2008 granted Kennecott a 40-year lease on public land around Eagle Rock, a move National Wildlife Federation attorney Michelle Halley referred to as “corporate welfare,” closing off lands and waters “that are paid for and enjoyed by taxpayers to grant exclusive access to those lands to a company for private gain and with no permanent ties to the state.” The agreement called for only $4,000 annually spent on water quality monitoring, which Halley and other opponents say is nowhere near enough for meaningful testing for “acid mine drainage” – a common effect of mining in sulfide ore – or other contamination issues.

Can UP’s economic future be both mining and tourism? 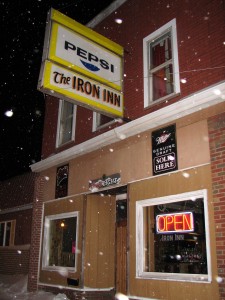 In towns built on iron mining and gold mining, locals like those in the Iron Inn on a winter night look forward to the jobs promised by Kennecott. Photo: Kari Lydersen

Many local residents see the battle over the nickel mine as highly symbolic and indicative of the larger economic and environmental future of the Upper Peninsula – potentially characterized by either a resurgence of metal mining or increased tourism and outdoors recreation. Kennecott officials and mine supporters have said the two aren’t mutually exclusive, but mine opponents don’t buy it.

At the same time state boosters are promoting the state’s water as a major asset, they note, state agencies are allowing a private company to take over public land and irreversibly alter its water and other natural resources. Local activists have for years been monitoring water on the Yellow Dog Plains, so they will have benchmarks for comparison if mining starts. Pryor said they are embarking on a year-long intensive water monitoring project that will adhere to the same standards as a bi-national Lake Superior monitoring program undertaken by the U.S. and Canadian governments.

Chauncey Moran, who moved to a cabin nearby specifically to help protect the area’s water and ecology, spends long days trekking through the forests or snowmobiling down icy roads to collect water samples. He fears seeing an uptick in metals and pollutants, and he notes that all the samples he and students who help him have collected so far will compared to future results likely demonstrate the effects of sulfide mining – and he hopes inform other communities where mines are proposed.

“The future of clean water rests on prevention and establishing defensible, repeatable and irrefutable baseline data that demonstrates the fragility of our ground and surface waters,” Moran said. “These actions will validate what levels of prevention or remediation, if any, have been effective for maintaining high quality waters seven generations and beyond.”

“Our water is so pure, purer than you can find just about anywhere,” Pryor said. “What they want to do here is a travesty.”