Running your own business can leave you with little time to think about your environmental impact. Composting offers an easy way for companies to walk a little lighter on the earth.

It’s as simple as ordering a bin, training your staff and watching your landfill waste dwindle, Hoort said.

After adding recycling bins, Hoort noticed the office was still generating more waste than expected. So she made the next obvious choice: composting. Between recycling and composting, the office has been able to retire one of their two garbage bins. 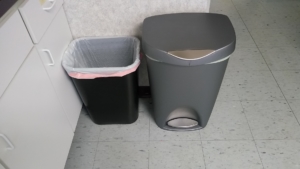 The staff took some time to learn what could be composted. Commercial composters can take any organic material like dirty paper products, cardboard and most compostable cups and utensils. Likewise, commercial composers can handle meat, oil, bread and other cooked foods that would cause problems for backyard composters.

If that sounds messy, you wouldn’t be wrong.

Hoort also hires a bin cleaning service to come every few weeks throughout the year. The simple cleaning service, provided by eco-190*, keeps away the smell and flies that can hang around old food.

It’s a small cost, Hoort said. She pays $90 every three months for the compost bin, and a small amount for the cleaning service. However, widespread composting could pay off big for the environment.

About one third of all food produced globally goes uneaten. This food, when it’s thrown away and left to rot in landfills, releases methane, a potent contributor to global warming. Composting can decompose food waste in a way that doesn’t produce methane.

Elder’s Helpers’ waste carts: recycling, compost and trash. The majority of waste is either compost or recycling. (This photo was taken after snow disrupted trash collection for a week.) Credit Andrew Blok

The United States EPA says methane has the potential to warm the planet 28-36 times as much as carbon dioxide in a century, even though methane only sticks in the atmosphere for about a decade. The Environmental Defense Fund estimates that methane caused 25% of the human made global warming thus far.

Elder Helpers gets composting service from Organicycle, a company providing compost services in and around Grand Rapids. Other options include Wormies, which operates in Grand Rapids and offering four pounds of free compost after every eight food scrap pickups. Urban Roots, an urban farm in Grand Rapids, also picks up food scraps from businesses and sells the compost at its community market. New Soil, a division of Arrow Waste, offers commercial composting all around west Michigan.

Each company’s service area and composting capabilities varies, so research to find the best fit. With a wealth of composting services available, you’re bound to find one that fits.

WMEAC’s annual meeting an evening of celebration and looking forward