MILWAUKEE – Karen Sands was amazed to see her rain barrel fill up “in like 10 minutes” during a heavy rain, collecting gallons that otherwise would have flowed over sidewalks and streets, picking up oil, bits of rubber, metal, salt and other grime and dumping it in waterways that empty into Lake Michigan.

Sands is the sustainability director for the Milwaukee Metropolitan Sewerage District (MMSD) which handles wastewater for the city and neighboring communities. But even she had not been able to visualize the sheer volume of stormwater that courses through the city during rains, until she got a barrel to catch runoff from her roof.

The rain barrels are just one aspect of a multi-faceted stormwater reduction program that has helped Milwaukee greatly reduce the amount of debris and contamination flowing into its waterways and Lake Michigan.

In the oldest areas of the city, stormwater also runs into sewers, overflowing them and causing untreated wastewater to end up in the lake.

Such combined sewer overflows – CSOs – are one of the prime environmental challenges facing the Great Lakes. They cause serious contamination and beach closings.  More frequent intense storms already logged in recent years, and predicted to increase with climate change, only exacerbate the problem.

Milwaukee built some of the region’s first sewers more than 130 years ago to carry untreated wastewater into rivers and the lake. But today the city is a national leader in reducing stormwater runoff.

An inter-departmental “Green Team” assembled by Mayor Tom Barrett six years ago has launched an array of retention ponds, bio-swales, gardens and underground repositories to filter stormwater through soil, gravel and organic material. Such measures reduce nitrogen and phosphorus that have caused a 50 percent increase in algal blooms in the Great Lakes.  Toxic metals such as copper, lead and zinc are also significantly reduced, according to the Environmental Protection Agency. 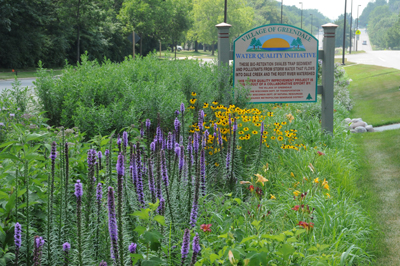 Stormwater from city streets is channeled into and then naturally filtered through “bio-swales” like this one created by the Milwaukee Metropolitan Sewerage District. Photo by Robert Kuehn

About five percent of the Milwaukee metropolitan area – the oldest, most densely populated part – has sewers where stormwater combines with wastewater before going to a treatment plant, or being dumped untreated in the case of CSOs.

Reducing stormwater run-off is an important environmental goal even without overflows as all the gunk stormwater picks up on roads is channeled into waterways – including the Menomonee, Kinnickinnic and Milwaukee rivers  – that empty into Lake Michigan.

Stormwater, smart energy and green economic activity are the three focuses identified by the Green Team. 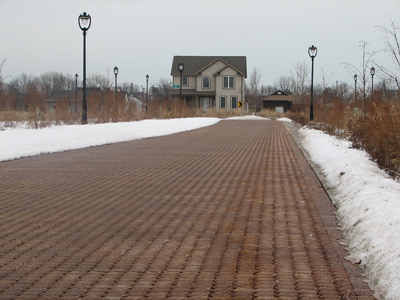 Permeable pavement like this at a new Milwaukee housing development lets stormwater filter into the soil rather than running off into area waterways. Photo by Kari Lydersen

“No single entity can do it alone,” said Matt Howard, head of sustainability initiatives for the city. “It’s a matter of bringing all the stakeholders together. The leadership starts with the mayor. Ever since he’s come into office he’s been committed to this.”

The International Joint Commission lauded Milwaukee and Toronto for reducing CSOs and stormwater run-off in a 2009 report on Great Lakes water quality. Milwaukee water quality efforts have been recognized as part of the United Nations Global Compact Cities Programme; the city has received numerous other awards for its green infrastructure.

These projects — overseen by the city Department of Public Works and the MMSD, which serves 28 communities  — cover a range of scale, cost and type:

These are large projects carried out by government agencies. But stormwater is also reduced by smaller projects directly involving Milwaukee citizens. The city and sewerage district have helped create scores of community gardens where the rooted plants and organic compost hold water much better than the shallow turf grass that otherwise grows in vacant lots. The Green Team has partnered with the local group Growing Power to grow produce in urban gardens. The gardens not only retain stormwater, they also produce food for low-income residents.

Heavy flooding that once disproportionately impacted low-income neighborhoods seems to be alleviated in spots with many community gardens, Howard said.

“It might seem strange to have a sewer district interested in urban agriculture,” said Sands. “But it’s not at all, it helps our system function better.”

The Green Team has also sold or donated 14,000 of the 55-gallon barrels to collect rainwater for gardens or other uses rather than letting it flow over dirty streets and into rivers. The reclaimed pickle and syrup barrels which otherwise would have gone into landfills are restored and painted by low-income residents as part of a job corps program.

“Rain barrels won’t solve the problem, but they go a long way in education,” Sands said. “I think a lot of people have this Eureka moment when they get one.”

The city and sewerage district oversee a program where schools can apply for funding for stormwater reduction projects. The Green Schools program has already transformed 77,000 square feet of parking lot at 10 schools into green space – greatly reducing run-off. Ecology and green technology are also integrated into the curriculum at these schools.

Green streets, roofs and other controls worth the investment 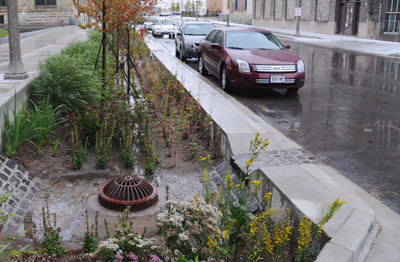 Outside an historic Milwaukee brewery undergoing a “green” makeover, stormwater is channeled into this retention area for natural filtering. Photo by Robert Kuehn.

Additionally, developers can seek city funds to build or renovate streets with permeable pavement and special curbs that channel water into reservoirs eight to ten feet underground.  Such a green street is part of transforming a historic brewery and surrounding buildings into a new commercial park.

Green projects aren’t cheap, but the Green Team says they’re worth the cost  even in tight budget times. They lead to long-term savings in water treatment costs, energy bills and infrastructure repairs. The sewerage district analyzed the cost per gallon of reduced run-off for various green measures versus the cost per gallon of storing water in the deep tunnel system. With the exception of green roofs and rain gardens, nine other green solutions were significantly more cost-effective than the deep tunnel.

“That doesn’t cost anything extra, it actually saves money,” said Ghassan Korban, coordination manager for the Department of Public Works. “You have to think creatively.”

Stormwater reduction also creates jobs directly and indirectly. A decade ago the Menomonee Valley, near downtown Milwaukee and next to the river of the same name, was a desolate stretch of rail yards and brown fields. The city and sewerage district built retention ponds and other green infrastructure as key parts of a larger revitalization of the valley, including removing or capping contaminated soil and raising the ground level by 10 feet with clean dirt.

The fact that incoming businesses could take advantage of these stormwater reduction measures and didn’t need to build their own retention ponds helped attract green jobs, including two solar panel factories and a wind turbine factory, plus a local pizza company and other manufacturers. A new bike trail also meanders by these businesses and along the banks of the Menomonee River.

“This used to be a dead river,” said Howard. “Now you can fly fish in it.”

The Windowfarms Project: for people who love garden-fresh veggies year-round

Are you a Wheel or a Roadblock?