Two lagoons and the Muskegon River that separates them make up the three bodies of water in Muskegon’s Veteran’s Memorial Park. The flooded sidewalks along each side of the southern lagoon almost make a fourth and fifth.

Orange safety fences line the southern lagoon but fail to stop water from drowning the adjacent grass. Nearby, beside a World War One-era cannon, patches of grass grow wild.

In the early 1930s, 28 acres of wetland was cleared to create Veteran’s Park. The greenspace sits right between the two roads of Muskegon’s Causeway, a former part of the tourist-centric West Michigan Pike.

Veteran’s Park is in transition between swampy greenery and tranquil park, and Kathy Evans says reconstruction of the park is near complete.

Evans is the environmental program manager for the West Michigan Shoreline Regional Development Commission (WMSRDC), a planning and development agency representing over 120 local governments in the Muskegon area. She is the lead in a $2.3 million National Oceanic and Atmospheric Administration grant project to open Veteran’s Park’s lagoons to the Muskegon River and to bring the land’s wetland habitat back.

The restoration is part of a multi-year, $75 million vision to take nearby Muskegon Lake off the Great Lakes Area of Concern list by 2020. The Muskegon River, which goes through Veteran’s Park, flows through Muskegon Lake.

The NOAA designated Muskegon Lake as one of nine habitat focus areas in the country. A legacy of logging industry, paper mills, foundries and a coal plant all disrupted and polluted Muskegon Lake’s ecosystem and watershed.

To delist Muskegon Lake as an area of concern, nine beneficial use impairments — barriers to a safe, accessible body of water — must be removed. Four have been removed so far. Restoring Veteran’s Park to a wildlife and fish habitat for Lake Muskegon would help remove a fifth.

Shortly after Veteran’s Park was officially dedicated to World War One veterans, it was coined “Michigan’s Most Beautiful Mile.”

As the decades passed, more and more memorials were added to the park to remember each passing war’s Muskegon County veterans. An obelisk and cannon stood near each end and scores of small memorials lined the walkways.

But by the 1970s, Veteran’s Park was overgrown. Cattails grew so thick that each lagoon looked like a narrow channel. The southern lagoon, cut off from the Muskegon River, grew so thick with algae that Evans said it looked like “pea soup.”

The high, murky water compelled local veterans, community organizations and volunteers to take action. Evans and the WMSRDC began to draw preliminary engineering work to help secure local grant funding when they came across the NOAA and Great Lakes Commission partnership. On Veteran’s Day 2015, they found out they received grant funding.

“It’s a nice combination, being able to restore [the park] to its original intent and then to make it environmentally sound again,” said Lupe Alvair Jr., member of the Muskegon County Veterans Advisory Council.

To Alvair Jr., the park means, more than anything, a dedication to the 594 Muskegon County soldiers who died in battles. The work being done on the park is not just to help the environment or the park’s aesthetic, but for veterans and the community. 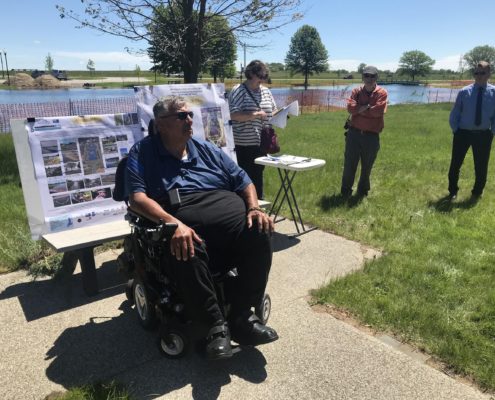 Despite the park’s in-limbo appearance, Evans says that most of the wildlife work is completed. That’s because most of the work happened in the water.

Last summer, the WMSRDC hired a company to remove all the water in the disconnected southern lagoon. Then, they removed all the cattails, muck and old oil pipes that lined the lagoon’s bed.

Then, the bottom was recontoured and filled with sand, gravel beds and trees. Pallet-like boards — as Evans says, “fish condos” — were positioned underwater by the river’s edge. Filter cloth was laid to stabilize the lagoon’s slopes.

Each addition was meant to mimic a natural stream, providing sanctuaries for fish while reducing erosion and algal blooms.

Much of the work outside the water is meant to limit flooding and non-native plants from spreading. The land of the southern half of Veteran’s Park, — being tucked between two roads, a river and a lagoon — is prime for stormwater flooding.

While portions of parkland still remain submerged, the WMSRDC is planting native rye along the lagoon’s edge to prevent erosion and dry up the shoreline.

In order for water dredging to occur, trees had to be removed from the park, some of which were planted in memoriam. These trees are being replaced by native, Dutch elm disease-resistant elms. Alvair Jr. and others are helping those who lost a memorial tree find a new one.

When completed, the park will have 5.3 acres of open water wetland and 2,257 linear feet of shoreline fish habitat.

It’s been a community effort. Veteran’s Park’s two lagoon bridges were refurbished by volunteers. Cannons and other memorials are maintained by veterans of the area. The Michigan Department of Transportation has put in park lights all around the park’s trail. The WMSRDC is even working to reestablish the West Michigan Pike as a scenic tourist route.