Chicago teen Luis Vega is an unlikely voice for clean air after a coal-fired power plant threatened the health of his community.

He rallied youth and organized a march to protest the Fisk Generating Station, which imported nearly one million tons of coal from Wyoming last year.

Vega  unearthed the relationship between the Great Lakes region’s largest city and the American West. His story is part of a multimedia project recently reported by the award-winning News21’s Powering a Nation segment.

Chicago teen Luis Vega organizes a march to bring attention to the harm caused by coal-fired power plants. But first, he must gather the courage to speak out for his community

The connection between Wyoming’s coal mines and Chicago’s citizens is stronger than you’d expect. Coal from Wyoming powers a Chicago plant that pollutes the neighborhood around it. While the company that owns Fisk makes a profit from this coal, the air pollution damages the health of people nearby. 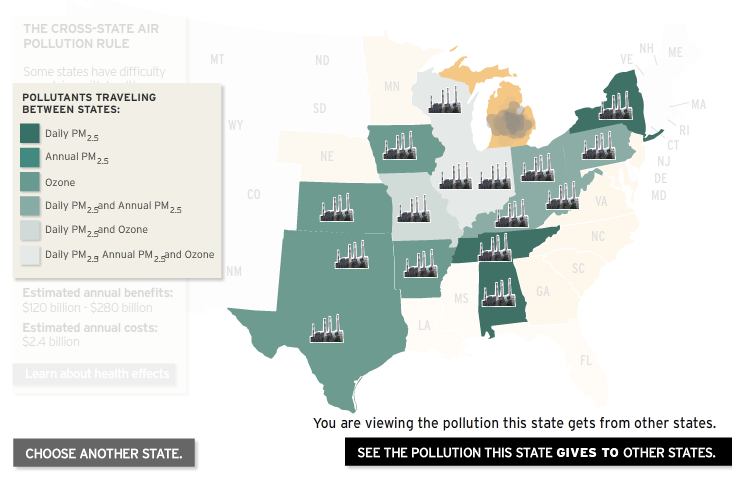 More than a dozen states contribute to Michigan's air quality. Click to visit the interactive map.

Pollution knows no political boundaries. When traveling across states, it can cause health problems and interfere with air quality compliance. A new cross-state air pollution rule by the Environmental Protection Agency requires states to cut down on bad air exports to help 240 Americans breathe a little better.

This interactive map shows how states swap air pollution and features all eight Great Lakes states. Click on the state to see where it sends and receives ozone and particulate matter.

The full national report features additional videos and interactive graphics showing the political, economic and health implications of the country’s reliance on coal.

The coal series is the latest installment of Powering a Nation, which yearly examines critical energy issues. It’s supported by a collaborative group of journalism schools that experiment with storytelling and investigative reporting in the award-winning News21 program.

Here’s what the reporting team says about the project:

“Coal: A Love Story” explores our modern culture’s complicated relationship with coal. Almost half of the nation’s electricity is generated from the burning of coal. Despite the fact that we rely on electricity for nearly everything we do, few of us are aware of how it is generated. Whether we like it or not, we are in a complicated relationship with coal for the foreseeable future.