The best-known near shore threats to the Great Lakes are raw sewage and algae blooms. Both receive considerable attention from government agencies and accounts about them are regularly reported in the popular media.

The threat posed by the nuclear power plants that dot the region could easily trump both. It may be the ultimate near shore threat.

There are 33 nuclear reactors  in the Great Lakes region, many of them near the water’s edge such as Palisades in Michigan.

After a seeming dormant period of public concern about nuclear power risks, awareness increased this past year. The Fukushima Japan meltdown is likely the reason.  That incident played out in the news over weeks and impacted not only nearby residents and workers but food and water supplies. Remnant amounts of radioactivity eventually hit this nation’s west coast.

Closer to home, there has been increasing activity in Canada. In addition to the 100,000-year underground waste storage proposal, Bruce Power has sought permits to transport contaminated equipment on the Great Lakes and St. Lawrence River to Sweden for decontamination.

He’s concerned about transporting nuclear waste on lakes and rivers because “most accidents happen near harbors” which means near population centers.  Jackson is executive director of Great Lakes United, a bi-national group that focuses on Great Lakes issues.

His group, and others want the U.S. and Canada to assess ”the risks, threats and unknowns“ of nuclear power plants.

They have asked the International Joint Commission to request the U.S. and Canada to reinstate a task force for the assessment.   The commission, which advises the countries on trans-border water issues,  has declined.

“Traditionally, such references (requests) either come with funding to conduct the examination or direction as to how such a study would be funded,” said John Nevin a spokesperson for the commission.

“Short of such action by the governments, the commission continues to monitor this important issue and remains acutely aware of the concerns raised by the public on both sides of border.”

Jackson disagrees and says the commission “sets up task forces all the time.”

The Zion Nuclear Station is equally 50 miles north of Chicago and south of Milwaukee on the shores of Lake Michigan.

“It’s critical the nation protects its water resources from nuclear contamination,” Barrett said. “We must find a safe, permanent storage facility for the country’s nuclear waste.”

Kirk has a keen interest in near shore Great Lakes issues including the dumping of billions of gallons of sewage into the lakes.

He is in a position to spotlight near shore threats as he co-chairs the senate Great Lakes Task Force with Michigan Sen. Carl Levin. The task force prioritizes and emphasizes Great Lakes issues in Congress.

A new addition to the recent update to the Great Lakes Water Quality Agreement between the U.S. and Canada requires caution:  “Where there are threats of serious or irreversible damage, lack of full scientific certainty shall not be used as a reason for postponing cost-effective measures to prevent environmental degradation.”

This precautionary approach seems tailor-made for nuclear issues like underground storage of waste. Who can say with certainty that it’s safe to store waste for 1,000 years let alone 100,000?

The test as always with the agreement is will the U.S. and Canada comply with the document of their own creation?

Understanding the advantages, risks and threats of nuclear energy is daunting. That may be why we don’t hear much about it until there is a problem. Then all hell breaks loose as with the Fukushima disaster.

Those of a certain age may remember Pennsylvania’s Three Mile Island near disaster. A huge concern then was that we didn’t know what we didn’t know. And it’s inherent in us to fear the unknown, with justification, when it comes to nuclear power because of the potential for a loss of drinking water, evacuations and long-term threat of disease.

The Great Lakes region has a long history of neglecting or ignoring its environmental problems. 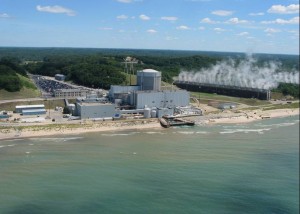 The many legacy toxic hotspots that dot our shores were ignored for decades and it will be decades more before they’re cleaned up. That assumes we have the will to keep funding the effort.

Every year we continue to dump billions of gallons of sewage into our rivers and lakes because we won’t invest in infrastructure. That shows no signs of changing and those problems aren’t insurmountable, if we want to tackle them.

However they pale compared to the consequences of neglecting the nuclear waste storage and transport issues.  The least the U.S. and Canada can do is assess those threats and unknowns.

Senators Kirk and Levin could easily use the gravitas of their offices to spotlight this issue and they should if their concern for the Great Lakes is more than perfunctory.

To neglect the nuclear threats that are literally on our shores…… that’s “really scary.”

EPA Settles in Lawsuit, To Treat Invasive Species as “Living Pollution”
Harmful banned pesticide slowly leaving the Great Lakes environment
Controversy rises over identification of disease clusters
Freshwater Wind Farms and Fertilizer Runoff: Which is the real threat to fish?
Ohio lawmakers could override veto of Great Lakes water use bill
Satellite watch: Measuring the quality of lakes from space
Musseling Back on Invasive Species
It takes more than money to restore a watershed
0 replies