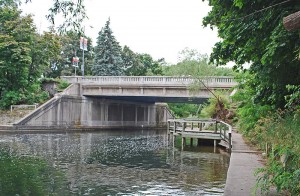 A committee raised more than a million dollars to modify dams along the Boardman River in Traverse City. Photo: Andrew Jameson.

LANSING — Lack of funding for dam repair or removal is an increasing concern as many across the state approach the end of their design life.

Built to last 50 years, more than 90 percent of the state’s 2,580 dams will have exceeded that lifespan in the next few years, according to the Department of Environmental Quality (DEQ) Dam Safety Unit. They include hazardous and abandoned dams, and those no longer used for their original purpose.

Inspections take place and deficiencies get identified, but it takes money to modify or remove the dams, he said.

“The reality is that many dam owners have absolutely no money set aside to fix or maintain their dams,” said James Hegarty, a manager at Prein&Newhof, a civil and environmental engineering and consulting firm in Grand Rapids. “Even if they did, the willingness to do so is usually quite low.”

And the state doesn’t offer grants to assist private owners with maintenance, according to DEQ.

“The state has absolutely no money to help private owners fix dams,” Hegarty said. “They have none – zero – they are lucky to even have the few people doing inspections.”

The state also doesn’t require dam construction applicants to prove they can afford to maintain them, and in many cases owners lack the technical expertise to implement alternative safety measures, according to a report from Prein&Newhof.

Dams are classified as high, moderate or low hazard, depending on the risk they pose to people and property in the case of failure.

Approximately 87 percent are classified as low hazard because their failure would have insignificant effects on lives.

But the classification system overlooks a major factor: The risks posed to habitat, Hegarty said.

Golden Lotus dam in Vanderbilt, Otsego County, is classified as low hazard. But a dam gate failure in 2008 led to the death of “extensive amounts of fish,” according to a lawsuit against the owners by DEQ, the Attorney General and the Department of Natural Resources (DNR).

A surge of upstream water loaded with gill-clogging sediments buried and choked fish downstream on the Pigeon River causing them to die from lack of oxygen.

That was the third major fish kill at the dam, which still stands despite a 2010 court agreement to have it removed.

Trout Unlimited (TU), an organization whose mission is to protect watersheds that support wild trout and salmon, has pressed the owners to remove the dam.

“We have tried to work with them to pursue external sources of funding to help in removing this dam,” said Bryan Burroughs, TU executive director. “My guess is they don’t have the $600,000 required for the project but I’m not aware of them having pursued any grant options.”

Fundraising for dam projects is never easy, according to Todd Kalish, a fisheries supervisor with the DNR.

Kalish headed a committee that raised millions of dollars to remove the Sabin, Boardman and Brown Bridge dams, and modified the Union Street dam on the Boardman River in Traverse City, which had continuously failed to meet federal compliance standards for hydropower dams.

The owners, Grand Traverse County and Traverse City, assigned a board of state and federal officials and the public to gather community feedback and manage an engineering and feasibility study from 2005 to 2009.

“This was the most comprehensive dam disposition project in the history of Michigan,” said Kalish. “We were effective in getting funds from government agencies and private organizations like the Great Lakes Fishery Trust because we engaged the public in the decision- making. But it was a most intense and complex process.”

The engineering and feasibility study was also designed as a template for other communities facing similar problems.

But that’s just one of the few success stories, according to Ronald Brenke, executive director of the American Society of Civil Engineers Michigan Section.

He said it’s frustrating that the state isn’t investing in dam infrastructure, unlike other states.

“The lack of rehabilitation funding for Michigan dam owners is a critical infrastructure safety issue,” he said. “The fact that many dams in need of upgrading go without warrants the grade of ‘D’ for the state.”

Biodigestion and the Greening of West Michigan

Michigan’s oil spill: a scientist gets sucked in

Money Talks. You Don’t Have to Listen
0 replies