April showers bring more than flowers, they also pose a real problem to our streams and rivers in the form of stormwater runoff, which is currently the largest water pollution issue we face in West Michigan. Contaminated sediments that are deposited in lakes and rivers are difficult if not impossible to clean up, and these sediment deposits are often the result of storm water runoff.

Grand Rapids residents Ken and Gail Heffner are watershed experts and have been utilizing a solution to this problem for years to great effect: rain barrels.

The scenario, as Mr. Heffner described it, is this: “With any watershed (and you are always in a watershed), all the water that enters it has to go somewhere. Ideally, much of it will percolate or filter gradually down through the ground into the water table, and the rest will run into streams.”

So far so good. The problem comes when you add things like buildings, parking lots, and streets to the equation. These structures, unlike soil, are impermeable, so the water that hits them during a rain storm has no choice but to rush into the nearest stream via the storm sewer, but not before it accumulates all sorts of dirty things as it comes into contact with cars, pesticides, dead animals, and other unsavory obstacles.

All this storm water that used to disappear innocently into the earth is now a contaminated deluge that overwhelms streams and rivers, causing flashfloods and all kinds of problems downstream; anything that comes off a building gets to the river in minutes – it goes into a sewer, then a stream, and then into the river. “We have to be concerned about what happens to the water on the way,” said Mr. Heffner.

Enter rain barrels and West Michigan Environmental Action Council. According to Mrs. Heffner, WMEAC has been doing a lot of work trying to address storm water issues by encouraging people to use rain barrels on their homes and businesses.

A rain barrel is a barrel large enough for the average teenager to crouch inside with a hole at the top that is usually covered with mesh to keep out bugs and leaves and small animals. You place the barrel under a downspout (the part of the gutter that points downward) and voila, your work is done.

Using rain barrels, explained Mr. Heffner, you’re not only keeping that water out of the stream system but also lowering your water bill because you’re not using drinking water to water your flowers and clean your car; you can just use the rain water you collect.

Mrs. Heffner said they haven’t had to use City of Grand Rapids water on their garden or lawn for three years.  “Ninety percent of the rain that hits our roof either goes into a rain barrel or onto our garden and lawn, not into the storm sewer.”

According to WMEAC’s Daniel Schoonmaker the rainbarrel program arose through the stormwater management planning initiative, part of WMEAC’s project in Grand Rapids to promote education about stormwater issues, which they’ve been doing since 2009. Currently WMEAC has distributed around 1,300 barrels, which is enough to cut about 2.3 million gallons of stormwater runoff out of the sewer system.

There are two reasons, said Schoonmaker, that WMEAC seeks to increase rain barrel usage in Grand Rapids and West Michigan. First, it does have a meaningful impact on storm water runoff. “Every rain barrel used takes off about 1,600 gallons of water from our water resources every year…that is a significant amount of freshwater that we just let wash away to become water pollution that we could be capturing and using…and we – the taxpayers of West Michigan – spend millions and millions to treat water every year.”

However, Schoonmaker said the second and more important reason for WMEAC’s rain barrel program is the education aspect of it. According to him, most people who come in to get a rain barrel are just interested in the water conservation part, and then WMEAC educates them about the water pollution side of it, and that enables them to start thinking about it in larger terms.

Rain barrels can be acquired at most hardware stores, and WMEAC is a great source of information on how to use them effectively and become part of the solution to storm water pollution. 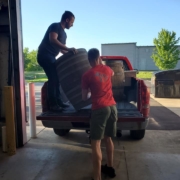 Teach for the Watershed Builds on Past, Looks to Future
0 replies