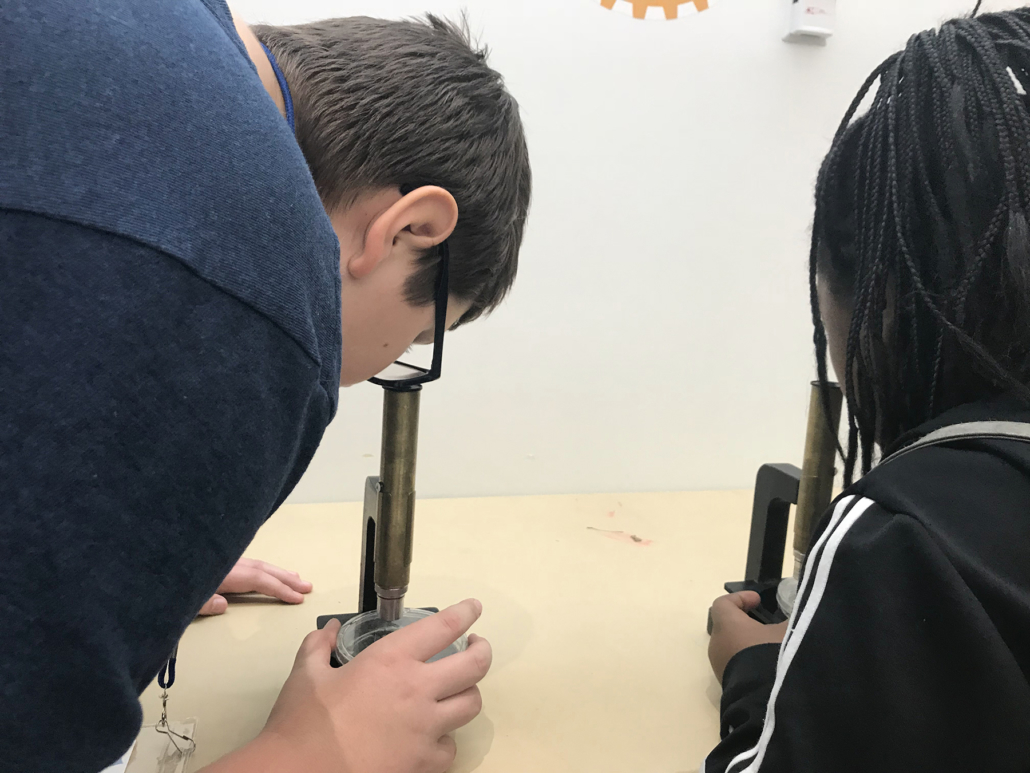 Huddled around a table full of microscopes, river water samples and slides full of insects and algae, Godwin Heights Middle School teacher Bill Mull encouraged his students to sift water insects out of tubs of river water in WMEAC’s nonpoint source pollution demo. He was met with a few wide-eyed squeals from some of his more squeamish students, while others, fascinated by the other-worldly-looking insects, held specimens a little too close to their faces for comfort.

“We could never accomplish this much in the classroom,” Mull said. “We’re able to do a lot more hands-on work and surround students with experts in their field and access the community to let these students get the most out of this experience.”

Wrangling his class of middle schoolers from microscopes to tiny models of the water system, Mull added, “Doing project-based education gives students a chance to familiarize themselves before they have to make decisions about what kind of projects we’re going to do this year,” he said. 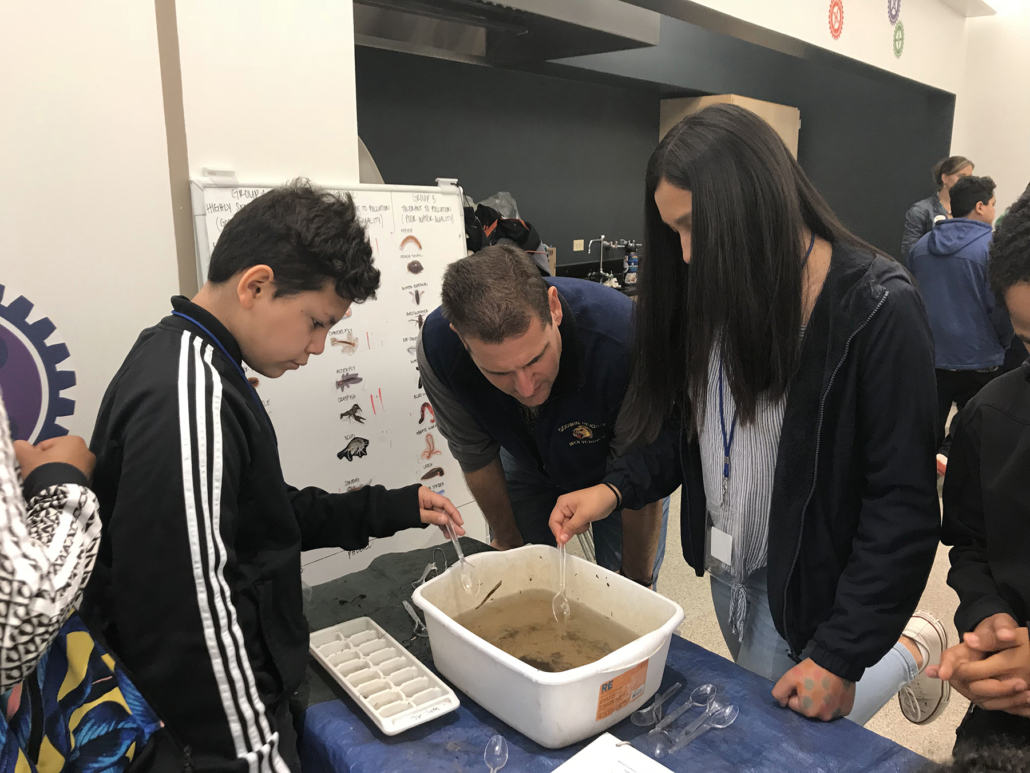 “This is going to be a great lead into our groundflow project that we’re doing this year,” Mull added.

Deeper into the museum, zoologist Rhiannon Mulligan from the John Ball Zoo wielded a long antenna while surrounded by students from Southwest Community Campus. Demonstrating how wildlife biologists track native animals throughout Michigan, she located a hiding box turtle equipped with tracking device in the room to the surprise of the students. 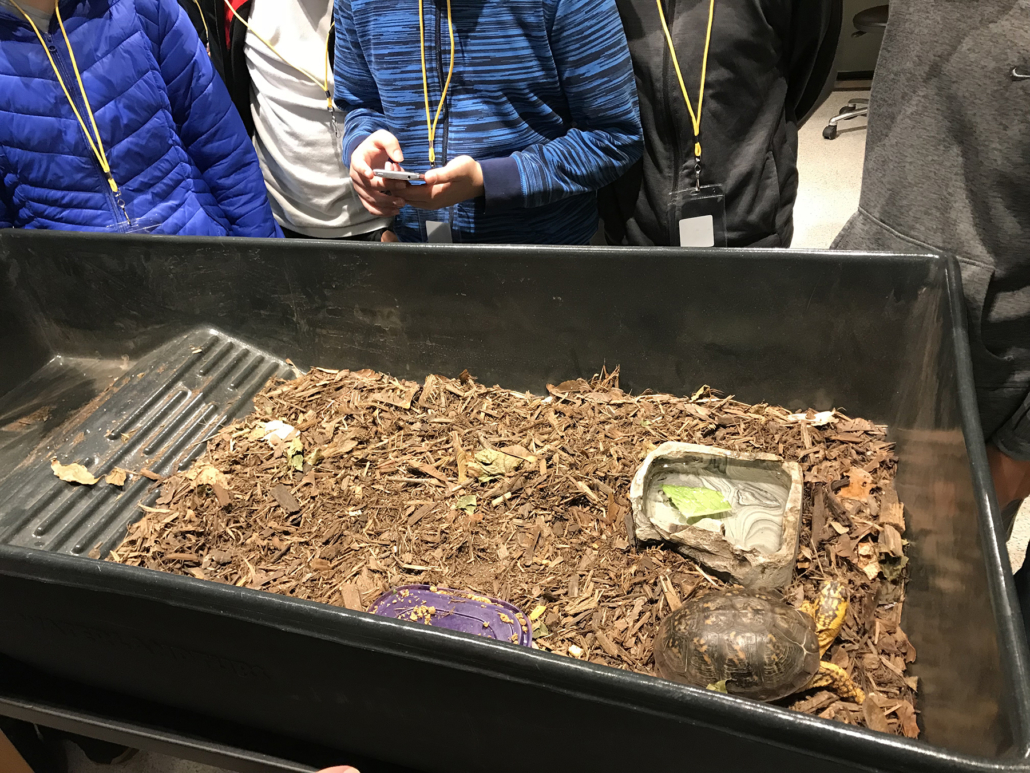 Students get up close and personal with a painted box turtle from John Ball Zoo.

Differences between snapping turtles and box turtles were discussed with enthusiastic input from middle schoolers before they all had a chance to look at the turtle up close.

The Plaster Creek Stewards led kids on an analog version of environmental Sims with colored pencils and paper to develop their own “property”, demonstrating how their actions affect the watershed, while the Lower Grand River Organization of Watersheds mediated a jumbo version of Chutes and Ladders where students from Stepping Stones Montessori acted as life sized game pieces, flowing past and picking up tokens representing pollution. They were eventually either “cleansed” by different recycling and filtering techniques represented on the board, or ultimately deposited into the Grand River.

On the third floor of the museum in the West Michigan Habitat room, Rob Schuitema from the GRPM led a group of Central Middle school kids in an invasive species activity among taxidermied fauna.

“We want to be different than just sitting in a classroom and taking notes,” Schuitema said. “We wanted to focus a little bit more on invasive species, like the great lakes asian carp and zebra mussels, and we’re happy to have the Kent Conservation District, bring in invasive plants as well.” 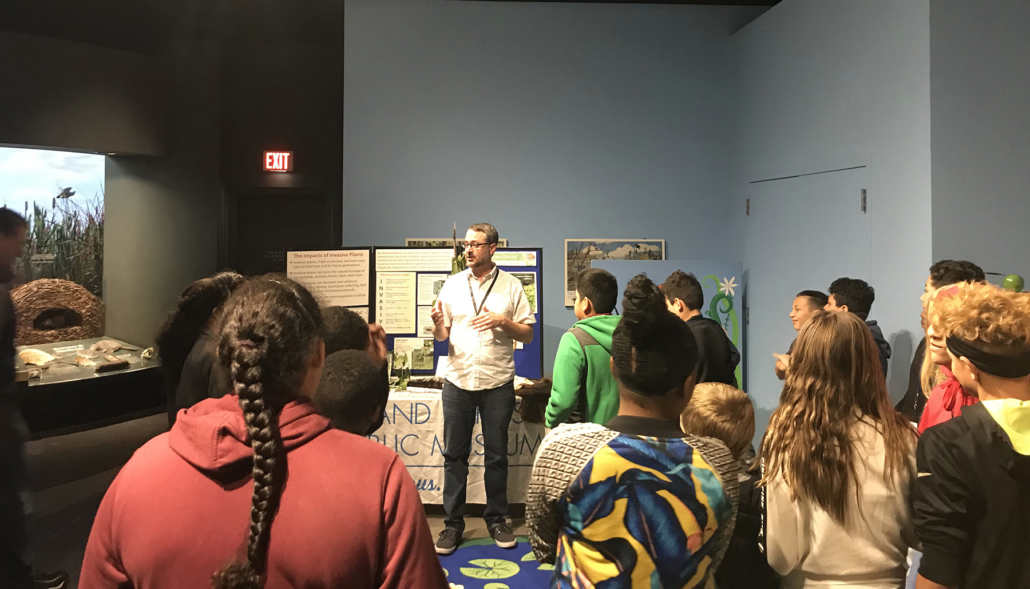 Schuitema said he hopes the River City Water Fest follows students outside of the museum and even past their classrooms.

“What we always hope is that they are engaged to the point to where they leave and they’re talking about today,” Schuitema said. “We want the Water Fest to spark some conversations that carry on outside of the program.”