Grand River Restoration is a large and exciting project that will alter the hydraulic flow of the Grand River, its banks, and ecological systems.  The Grand River is held in the public trust as a water body of the people of the State of Michigan and the United States.  As such, any alteration, particularly one as large and impactful as the proposed Grand River Revitalization and Rapids Restoration Project has to pass muster with a host of state and federal agencies to ensure the rivers protection.

The Michigan Department of Environmental Quality (MDEQ) and the Department of Natural Resources (MDNR) will play an integral regulatory role.  The U.S. Army Corps of Engineers, the EPA, and the U.S. Fish and Wildlife Service on the federal level will also have a input from a regulatory aspect.

The City of Grand Rapids and Grand Rapids Whitewater are working with national experts to learn what is required in the permitting process and to meet all of its requirements.

Perhaps the most pressing permitting issue is the presence of endangered mussels in the project area.  Project leaders will likely need to develop a Habitat Conservation Plan (HCP) to deal with the mussels.  Developing an HCP can be a complicated and lengthy process.  In this case that could mean requiring the identification of mussel species present in the river, a proposal to relocate the endangered mussels, and a plan to monitor them in a new habitat.  An HCP submission is expected this year.

Developing a viable HCP is one of the more significant permitting challenges facing River Restoration, but it is certainly not the only one.  The MDEQ will have to thoroughly review the hydraulic and ecological impacts during both the construction period and following restoration.  The proposed altered riverscape – including channel, bottom, and riparian edges – will have to be analyzed for the impact on floodplains, flow, wetlands, and ecological systems.

Additionally, the MDNR will have to approve any plans to replace the Fourth Street dam, closely reviewing the anticipated impact on MDNR lamprey control efforts.  The Army Corps of Engineers will also want assurances that the new river channel will come complete with adequate (read: enhanced) flood controls.

A project this big requires many people and organizations; this holds true on the permitting and regulatory side as well as for project leaders and city planners.  No single official in the MDEQ, the Army Corps of Engineers, or any other department has the whole picture.  Complicating matters, there is nuance about which statutes apply and the corresponding responsible authorities.  A project of this magnitude will necessarily have a lot of give and take. 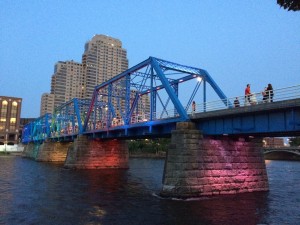 The Grand River Revitalization and Rapids Restoration Project is actively engaged with state and federal agencies in one of the longest phases of the permitting process, the pre-application phase.

A permit application submission begins a formal process timeline.  After receiving a permit application, the MDEQ has 30 days to do an Administrative review.  If all the required information is present, then the application is deemed complete.  If it is not, the DEQ can ask for more.  When the application is complete, for a significant project like this, the DEQ will issue a public notice for 20 days announcing the project and subsequent hearings.  The state then has 60 days to hold a public hearing and take citizen testimony.  After a public hearing, the DEQ will then have another 60 days to review public comments and to decide whether or not they warrant addressing.  After hearing from the DEQ, the EPA has 90 days to formally review and respond.

Climate challenges crop up in Michigan