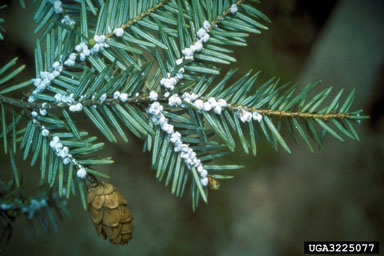 The Michigan Department of Agriculture and Rural Development announced yesterday that the tiny tree parasite known as the Hemlock Woolly Adelgid (pronounced “ah-DELL’-jid”) has turned up in Berrien County. These small, aphid-like insects are native to Asia but have been decimating hemlock forests along the East Coast of the United States since 1924.

According to the Associated Press, the bugs were first spotted in Michigan in Macomb and Emmett Counties back in 2006 and again in Ottawa County in 2010. In each of the previous cases, the infected trees were destroyed and “there has been no evidence that the parasite has spread.”  The infected trees in Berrien County will be cut down and nearby trees will be treated with insecticide.

The Hemlock Wooly Adelgid derives its name from the white, cottony egg cocoon it attaches to the underside of hemlock branches at the beginning of spring. Adult HWAs suck the sap out hemlock branches. Their saliva is toxic and causes the needles of the hemlock tree to dry out. If left unchecked, HWAs can kill a tree in as little as four years.

Just like in the case of the Emerald Ash Borer, humans are largely responsible for the spread of the HWA, transporting firewood and planted stock from infected trees to new, uninfected areas. The origin of the Berrien County infestation is still unknown.

Michigan has over 100 million hemlock trees that serve as a habitat for fish and wildlife.

Visit the Michigan Department of Natural Resources’ website for more information on how to detect and curb the spread of the Hemlock Woolly Adelgid.