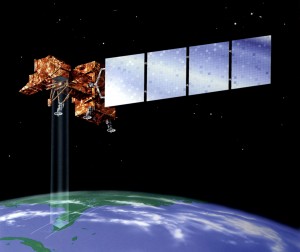 A new federal report says it’s cheaper and easier to test water quality from space than it is from a boat or a dock.

With 11,000 lakes, water quality testing and sampling in Michigan is not an easy feat. The United States Geological Survey recently reported how satellites can help.

Measuring water clarity is one way to check water quality. Lower transparency indicates greater growth of algae. And more algae indicates more nutrients from lawns or farm fields, said Pat Sorrano, associate professor at Michigan State University’s Department of Fisheries and Wildlife. A secchi disk measures the transparency of the water. It is lowered into the water and the depth at which it disappears from sight is measured.

It is an easy procedure for volunteers to perform. But it takes a lot of time to evaluate a lot of lakes. Researchers and volunteers from the Cooperative Lakes Monitoring Program collect data using secchi disks, said Lori Fuller, a geographer at the U.S. Geological Survey and researcher of the report.

Now a small sampling of that data is extrapolated to water transparency results obtained from lakes across Michigan using satellite imagery, said Soranno.

The study not only evaluates the current state of the lake, but also provides means to better evaluate them in the future, says Fuller.

g tools like this let’s us determine the state of a lake by not visiting them,” says Sorrano. “Getting them from satellite images is cheaper and it’s a way that we can get assessment for the water quality in the entire state.”

This is important because going to 11,000 lakes is not possible financially or physically.

While the results are slightly less accurate than if researchers sampled every lake with a secchi disk, many more lakes can be analyzed, says Sorrano. There isn’t enough money to sample every lake, but the benefit is that we have a pretty accurate number through this technique.

This method has been successful in other states such as Minnesota and Wisconsin and even overseas in places such as Netherland, says Fuller.

The predictions for the water quality obtained from the data collected using these equations will soon be available on the Michigan Water Science home page.

The lakes are selected randomly. Some need to be deep and others need to be shallow, said  Kendra Cheruvelil, associate professor in the Department of Fisheries and Wildlife at Michigan State University.

The equation used during these calculations is different for different years, says Fuller. Atmospheric and climatic conditions play a role in this and therefore have to be taken into consideration. 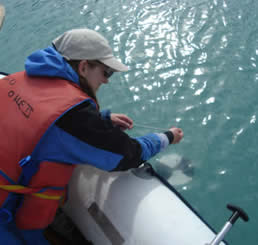 A secchi disk being lowered into the water to measure transparency. Photo via NASA

So do we still need secchi disks?

“We will never completely replace collecting data in a lake,” explains Sorrano, “To be able to use this Landsat-Satellite imagery you still need to go out and measure secchi in a certain number of lakes so that you can develop a model that relates what you get in your satellite image to what is actually in the water.”

“Shadows and clouds can change the level of transparency in the water,” Fuller says.

And working with the instrument themselves, people feel more connected to the environment. Without the direct measurements, ordinary folks would not get a chance to work with satellite imagery and hence not feel the connection, says Cheruvelil.

“It educates people about lake health,” she says, “It translates to people caring more about lakes and therefore the environment.”