Most kindergarteners are learning how to spell or read, but Milo Kraegel, 6-years-old, set his goal to start the first-ever Earth Saving Club at Congress Elementary School. In a matter of months, Milo, with the help of his mother, Irene Kraegel, has worked to teach others about sustainability and help his school reduce its environmental footprint.

Since Milo was toddler, he has been learning about the importance of sustainability through his parents, who practice recycling, composting and have rain barrels set up at home. In September of 2016, Irene Kraegel was surprised to hear Milo wanted to start his own Earth Saving Club. 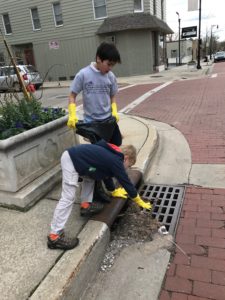 “Milo came up with the idea on his own,” said Irene. “We have done a lot of things as a family around our house. We are conscious about how much we drive, his dad has four rain barrels set up around his house and we have compost. I would say his whole life he has been involved in doing things with sustainability.”

With much support from Congress Elementary, Milo’s teacher Elisa DeMaar has supported his efforts, along with other faculty members. On March 9, Congress held a learning night where the club hosted three tables on reducing, reusing and recycling.

Throughout the school year, the Earth Saving Club has hosted monthly meetings on Fridays at Milo’s house – a variety of topics are discussed from nature to the importance of composting. In addition, club members go on field trips.

For one field trip, Clothing Matters Founder and Owner Marta Swain invited Earth Saving Club members to her store to learn about environmentally friendly apparel production. Milo said he never considered clothing production to have an impact on the environment.

Then they found WMEAC. Milo was excited to learn more and bring his Earth Saving Club. Helping Milo prepare for learning night, Jessica Vander Ark, Director of Environmental Education at WMEAC, donated resources such as learning books to help Milo’s cause.

“WMEAC helped give me books to hand out for my learning night,” Milo said. “We have been increasing recycling at Congress. It used to be hardly any of the school was recycling, so we thought ‘we have to stop this.’”

The Earth Saving Club recently took part in storm drain cleaning at WMEAC, with nearly 10 other children. In the future, Milo plans to partner with WMEAC again by having his club participate with the Teach for the Watershed program.

“We cleaned out the storm drains Friday,” Milo said. “I had fun. We went around the block and down the streets.”

However, Milo’s work does not stop at field trips. Taking on sustainability in his own lunchroom, Milo said Congress uses styrofoam trays and materials at school that are thrown away each day.

In an effort to change this and one day become a Michigan Green School, Milo is asking others write letters to petition for environmentally friendly products at lunch and a recycling system for plastic materials in the school.

“We asked (Elisa DeMaar) if she would have her class write letters,” he said. “We want as much letters as possible to be able to stop this.”

In addition, Milo and his mother plan to petition for a rain garden at Congress and create more environmental education lesson plans to create more outreach.

“I have a lot of plans (for the future),” he said. “I am planning to change it, so when I am not in kindergarten I will put (the club) in first-grade level.”

The Benefits of Stormwater Calculator and Green Infrastructure Benefits