Editor’s note: Mercury contamination is one of the issues that will be discussed Oct. 11-14 in Detroit at the 2011 Great Lakes Week.  Detroit Public Television is providing ongoing coverage of Great Lakes Week at greatlakesnow.org

But after decades of decline, mercury levels are increasing in some Great Lakes fish and birds, according to a recent study.

And health problems are occurring at lower concentrations than expected.

The study published in the journal Ecotoxicology examined recent research on mercury and, more specifically, methylmercury in fish, wildlife and their food webs in the Great Lakes region.  It is the most toxic form of the element and the only form that accumulates significantly in fish.

After years of decline, methylmercury levels are again rising in some species. 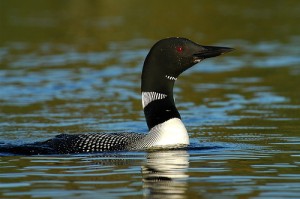 The study didn’t pin down why methylmercury is increasing in these species.  Whatever the cause, it is happening from the bottom up, Wiener said.

“We suspect something is happening regionally or globally to increase the concentrations at the base of the food web.” he said.

At each step in the food chain, the concentration of methylmercury in organisms increases, Wiener said.

The study also found lower levels of mercury and methylmercury are causing harm at levels once not thought to be dangerous.

“We now realize effects and risks have increased in fish and wildlife because they’re occurring at a much lower level,” Wiener said. “And the same thing goes for humans.”

In the common loon, for example, exposures that cause no effect in the adults can impair egg fertility, survival of newly hatched chicks, and overall reproductive success.

Mercury can harm the brain, heart, kidneys, lungs and immune system in humans.  Women who may become pregnant and young children are the most at risk.  According to the study, between 300,000 and 600,000 children are born in the U.S. each year with enough mercury to harm brain development.

Eating fish is the most common way for humans and wildlife to be exposed.

All of the Great Lakes states warn people to limit how much fish they eat because of mercury contamination.

The element occurs naturally but is often introduced into the environment through human activities – burning coal or waste are the two largest sources.  Coal-burning power plants are the largest human-caused source of mercury emissions to the air in the United States, accounting for more than half of all human-caused emissions, according to the Environmental Protection Agency.

“It’s a priority pollutant that’s not going away,” Jacobson said.  “But use and emissions are on the decline because states are taking these recommendations.”

And while there’s been a steady decrease in mercury emissions since the mid-1980s, there’s still a lot of work to be done, Wiener said.

“Efforts to reduce emissions are going to produce results,” he said.  “But we’ve learned that we need to get concentrations even lower than previously and figure out why there’s some trend reversals.”