From the front, Jane Dyer’s bright red home is a homey fit for the backroads of rural Alto, Michigan. From the back, it’s a modern, sustainable powerhouse.

On the south side of the roof and on the ground next to Dyer’s backyard garden are 33 solar panels. All of Dyer’s electrical needs have been generated through them since their installation in December 2017. Her May electric bill rate was only 8 percent of what it was the same time last year.

A few years back, when Dyer was building her home, energy efficiency and solar panels weren’t on her mind.

“I volunteered for WMEAC way back in the 70’s and 80’s, and have always considered myself pretty environmentally astute,” she said. “I was just paying attention to a place where I could have a giant garden and grow my own food.”

Then the electric bills started coming in. While Dyer’s heating bills were low, thanks to a wood-burning stove, her cooling costs were close to $300 during summer months.

Her utility, Consumers Energy, sent her material showing the difference in energy use between energy efficient and energy inefficient homes. Her usage was higher than both standards.

Dyer’s brother had raved to her about the solar panels he installed in 2015. Despite a tax rebate and net metering measures giving credit for excess electric generation, startup costs made her hesitate. I f she decided to buy panels, Dyer was “clueless” as to where to start.

Then, Dyer received an inheritance, which she decided to use to finance solar panel installation. To install them, and guide her through the process, she hired Mike Linsea, owner of Solar Winds Power Systems in Shelbyville.

“I think there’s a misconception that if you put [solar] on a roof that wasn’t built for it…that you have to do a ton of stuff for it, but that’s not necessarily the case,” said Bill Wood, executive director of WMEAC, who took a tour with Dyer and Linsea to see Dyer’s solar installation.

Linsea said that Dyer’s solar panels are light and can be installed on any roof, regardless of age. Because they absorb ultraviolet radiation, they often preserve the roof shingles underneath them too.

Dyer originally wanted all her solar panels to be installed on the roof, but Linsea suggested installing panels on the ground as well. There is always light to catch, even on a cloudy winter day, he said, but snow can build up on panels, preventing sunlight capture.

When it snows, and the roof panels are covered, all Dyer needs to do is take a big brush to the ground panels to ensure energy generation. 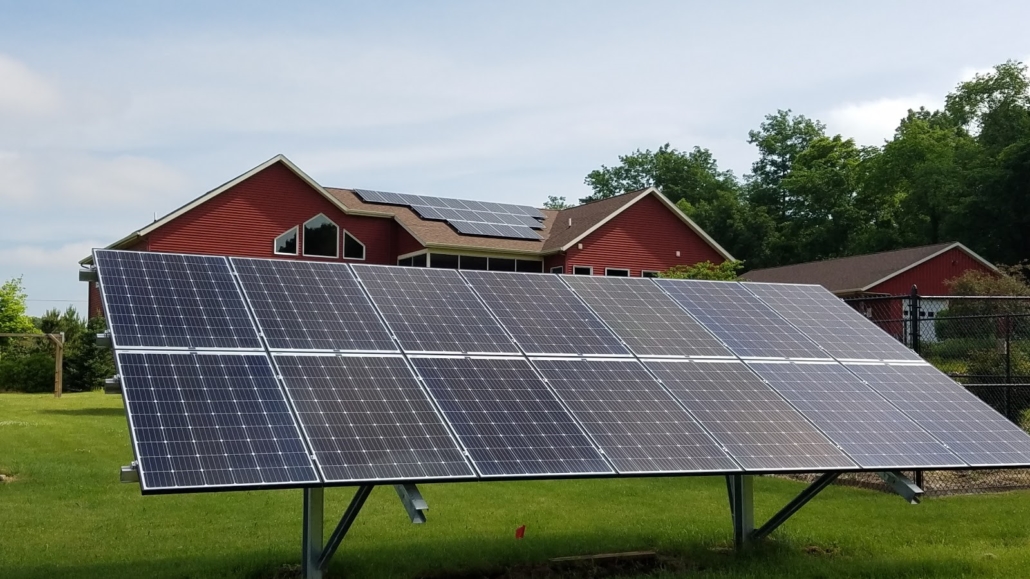 The total time for installation, from initial meeting to authorizing the energy switch with Consumers to putting the last panel in place, took only a few weeks.

Unlike some solar users, who are independent of a local electric grid, Dyer still has her utility. If her solar panels don’t capture enough sunlight to meet her needs, Consumers can step in and provide electricity.

Dyer’s utility also sets her energy plan. After confirming the switch to solar with Consumers, Dyer was moved from a time-of-day rate to a straight rate. While a time-of-day plan charges customers more per kilowatt hour during hours of peak electrical activity on a grid, a straight rate plan charges the same rate per kilowatt hour regardless of activity.

Time-of-day rates usually work well for solar users. Their peak energy generation hours often coincide with peak energy activity. If a solar user uses less during peak hours than what is generated, they can sell the excess energy at a high rate to their utility.

While Dyer may not be able to maximize her excess energy sales on a straight rate plan, she no longer needs to worry when using the energy she generates makes the most economic sense. She can use anything her panels generate in a day anytime she wants. It works for her — she gets most of her work done early in the morning.

Monitoring energy costs and generation is helpful for a solar user interested in saving money or minimizing environmental impact. To make monitoring quick and accessible, Linsea installs in-house monitors with every solar installation.

At every moment of the day, Dyer can see what she produces in kilowatt hours. She can see shadow patterns. She can view kilowatt hour production down to a single panel. Then, when the first anniversary of her switch to solar comes this December, she can begin comparing daily energy output to what it was a year ago.

“It’s one of the niftiest things about all of it: being able to track what you’re producing,” said Wood.

The Densest Spot in West Michigan Is Set To Get Cleaner