Lauded in Pure Michigan Ads, voted the most beautiful place in America, and attracting tourists from around the country, the ever changing landscape of our Michigan sand dunes are a beautiful sight to see. Yet up until recently, they had never been completely mapped out, and there was not a good understanding of the economic and social value of the the world’s largest collection of freshwater coastal dunes. A project by the Michigan Environmental Council (MEC), in partnership with many other organizations — including WMEAC — served to create a better understanding of the dunes’ geographic scope, and their value. The project was a continuation of a 2014 project, “Bringing the Latest Science to the Management of Michigan’s Coastal Dunes,” as part of an ongoing effort to create a better understanding of the dunes.

Their recently published report, “Valuing Michigan’s Coastal Dunes: GIS Information and Economic Data to Support Management Partnerships,” details the project. Their objective was “to generate information about the uses and values of coastal sand dunes in Michigan to advance understanding about their social and economic importance, and to support improved awareness and better foundations for management partnerships.” This objective would serve to inform policy makers in making informed decisions involving Michigan’s natural resources, and to help communities fully utilize these assets and engage dune enthusiasts for economic benefits. 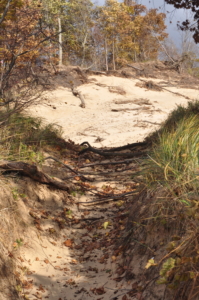 One of Michigan’s many beautiful coastal dunes

Michigan residents love the outdoors. They are more likely to camp and kayak than the average American, and spend $26.6 billion each year in products used for outdoor recreational activities. As part of the project, the team launched a #howyoudune survey, which examined how dune visitors interact with this natural resource: 3,610 people responded to the opt-in survey, which was largely distributed using a social media campaign and utilizing email lists, including the large Michigan Department of Natural Resources email list.

88 percent of the respondents had visited a dune for recreational purposes in the last year, and those that had averaged 6.7 visits. The top three primary reasons respondents gave for their trip was beach-going, scenic enjoyment, and modern camping. For each trip, respondents spent on average $133.15 per trip, on items like groceries, gas, and restaurants. Because it was an opt-in survey, the study can’t be used to create economic impact modeling tools, but it does give valuable information on the economic value of the dunes.

More than 92.5 percent rated protection of the dunes for future generations as extremely or very important, and 96.2 percent rated scenic beauty as extremely or very important. Survey respondents were invited to leave a comment, where many mentioned how important they believe protecting the dunes are. “This is my favorite spot in the world. Please do not allow them to be commercialized or destroyed,” said one respondent from Georgia. Though most were from Michigan, 12.3 percent were from nearby states, and less than 1 percent were international visitors (from Canada).

By inviting the survey respondents to include their email address in order to be contacted in the future about dunes — 57.5 percent of them did — the survey was also helping with a second objective for the project, forming an engaged coastal dunes stakeholders community, “with connections and tools to support future science-based efforts, improve management decisions and engage policy discussions.”

Along with gathering some survey respondents’ email addresses, the project also hosted the Freshwater Dune Summit, a two-day event in May of 2017. The event, which also served to kick-off the #howyoudune survey and brought together many dune stakeholders, including researchers, policymakers, and outdoor recreation enthusiasts. Through speakers, activities in the dunes, and social events, the summit created a feeling of camaraderie within the dune community.

Another component of the project was creating a comprehensive digital GIS map. This is the first complete map of the coastal dunes, following three efforts to map extensive parts of the dunes. The map was created using digital imagery, air photos, topographic maps and soil data, as well as field verification when needed. In the end, 230,423 acres of coastal dunes were mapped in the project, and 54.7 percent of these acres are in public ownership.

“A comprehensive inventory of Michigan’s coastal dunes has long been desired,” the report says, and the GIS map serves to fill this data gap. The map will give policymakers and communities a better understanding of what dunes they have, as they seek to steward and make decisions around the dunes. The map will eventually be available online for the public and stakeholders to explore.

These 230,423 acres of Michigan are home to many threatened or endangered plants and animals. Several of these species rely on the windblown sand for their survival. “Many of the ecosystem services provided by sand beaches and dunes are threatened by human use, development, invasive species, and climate change,” the report says. Through the survey to evaluate the value of the dunes for visitors, the efforts to create an engaged stakeholder community, and the compressive map of the dunes, the MEC report will serve to inform policymakers as they make decisions about how to best steward and utilize the dunes.

“This project provides information that can be applied locally to help communities begin to integrate social data and spatial knowledge into local planning efforts and to shape larger regional economic development, tourism and talent- attraction strategies,” the report concludes, “and in the long run, benefit not only the dunes, but also the people and communities who appreciate and depend on them.”

MEC, along with Michigan State University, have continued the study of dunes with a third project. The project consists of two major parts. First, the group is asking for people to send in their historical photos of dunes. This will help the researchers get a better understanding of how dunes change in shorter time periods, by comparing pictures taken at different times of the same dune. Though researchers have an understanding of how dunes change over a 1,000 year period, they don’t know how it changes in a 20 year period.

“The idea with this photo collection is to better understand like the changes that occur in dunes on a smaller timescale,” explained Tom Zimnicki, the project coordinator. “By capturing that information, it kind of helps us predict and understand what what will likely happen again.”

The second part of the project is a social science study, which will consist of things like workshops and interviews, to get an understanding about how people perceive and interact with the dunes.

The two parts of the study will help inform future decision making, as it helps researchers better understand how to approach conservation and preservation efforts, as well as what messaging and education are necessary and effective.

There’s a lot of value in better understanding and conserving the dunes, as Zimnicki explained. The dunes provide a natural barrier and protection to coastal communities, they are valuable as a natural ecosystem, and, as the recently completed study showed, they are economically valuable to their communities.

“There’s the intrinsic ecological value, there’s the kind of practical value, and … there’s obviously an economic value to this too,” Zimnicki said. Michigan’s unique sand dunes set it apart from other states, and MEC’s research on the topic is making great headway in better understanding the valuable dunes.

Material Recovery with Habitat for Humanity