When the U.S. Army Corps posted new evidence of Asian carp eDNA found in several Illinois water samples near Lake Michigan Tuesday, they did so quietly.

Thom Cmar blogged for the Natural Resources Defense Council Wednesday, trumpeting what the Army Corps did not — at least nine positive eDNA samples of Asian carp were found, mostly in Lake Calumet. The samples were taken between May 10 and June 27 of this year. The term eDNA refers to environmental DNA and does not necessarily indicate the presence of live carp. 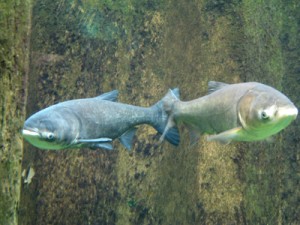 Samples taken by the Army Corps tested positive for DNA of Asian carp well past the electric barrier designed to keep out invasives. Photo: Peter Haugen

Cmar said the lack of any formal announcement didn’t surprise him. He writes the Army Corps has been insisting for months that there is no proof the electric barriers, installed to keep out these Great Lakes invaders, were unsuccessful. These samples were taken on the Lake Michigan side of the barrier.

“The Army Corps can only get away with saying that by ignoring the eDNA evidence, which clearly shows that at least some Asian carp have made it past the electric barriers … and have a free path into Lake Michigan,” he said in the blog post.

“We now have 85 warning signs that Asian carp are an impending tragedy for the Great Lakes,” Schuette said in a press release. “Yet the federal government continues on its five-year study as invasive species continue to move freely in both directions.”

The press release notes that eDNA testing is the “best and most sensitive means” of determining the presence of Asian carp.

Schuette said in the press release he will continue to advocate for a more permanent ecological barrier that would prevent access to the Great Lakes by Asian carp and other invasive species through the Mississippi River basin.

Jacqueline Tate, spokesperson for the Army Corps, said although the sampling results indicate a genetic presence of bighead and silver carp DNA above the electric barrier, the finding doesn’t necessarily indicate the presence of live Asian carp.

“Positive eDNA samples do not necessarily mean that a live carp has been in the area,” she said. “At present, eDNA evidence cannot verify whether live Asian carp are present, the DNA originated from dead fish, or water containing Asian carp DNA was transported to the location where water samples were collected.”