“Not all maple syrup is the same, it’s like wine,” said Jim Belcher, producer and packer of Awesome Woods Maple Syrup. “I still consider myself to be more of an artisan vintner.”

Belcher’s syrup is one of several products available at YMCA’s Veggie Van that are a step beyond produce. The pride he has in his syrup has been earned, too. This year he was awarded Best in Show at the Michigan Maple Syrup Association’s Winter Meeting. 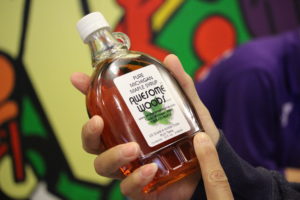 “It’s just about impossible to get syrup that’s as good as mine,” he said.

Beside Belcher’s maple syrup and the fruits and vegetables it first carried, the Veggie Van has grown to include kombucha, cheese, nuts, honey, granola, nut and seed butters, apple cider and, most recently, canola oil.

“If it’s healthy and it’s local, let’s give it a shot,” said Eugene Sueing, the community health director for the YMCA of Greater Grand Rapids and director of the Veggie Van program.

The program aims to bring fresh, healthy and locally grown produce to neighborhoods of Grand Rapids and Muskegon. Anyone can request a visit from the Veggie Van, but they focus on neighborhoods that struggle with access to fresh, affordable produce.

“If they can try something new that they haven’t tried before, that’s even better,” Sueing said.

Millie Hasley, 45, is a resident of Herkimer Apartments, one of the Veggie Van’s weekly stops on Fridays. She hesitantly bought a Kombucha from Bloom Ferments from the Veggie Van cooler.

“It’s new to me,” she said, reading the label and taking a sip of the lavender-hibiscus tea drink. “It’s different.”

Canola oil was added to the Veggie Van’s stock just this week. The producer, B & B Farms, is one of the only growers in Michigan, and the only one with a press.

“It’s as natural as you can get,” said Bonnie Blackledge, one of the owners of B & B Farms. The seed is non-GMO and the oil is made through a cold-pressed process.

“We don’t bleach or refine it in any way,” Blackledge said. 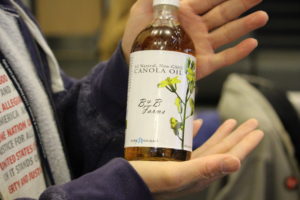 She says that her canola oil is similar to an extra virgin olive oil, and can be used like it, too.

“It’s perfect for frying or baking, making salad dressings,” Blackledge said, but she recommends keeping the temperature below about 375 degrees, or it can begin to smoke. This rules out deep-fryers for most users, but not all.

“They just do it outside,” she said.

Belcher’s maple syrup can be used as a substitute for sugar in many recipes, with some adjustment.

“You have to reduce the liquids in the recipe in order to be successful with it,” Belcher said. Maple syrup is about ⅓ water. Like honey, it also contains traces of other beneficial minerals absent in white sugar or high-fructose corn syrup.

Because of the high demand for Belcher’s syrup, the Awesome Woods brand is a blend of his syrup and other select Michigan producers.

“I’m very fussy about what I blend, I try to keep the quality as good as I can,” Belcher said.

The selection at the Veggie Van shows every sign of continuing expansion, too. Sueing said they’re actively courting more businesses and would be willing to consider anything healthy and local.

“As long as the price is fair and the customers want it, we’ll continue to do it,” Sueing said.