In 2015, from June to November, the Dorothy A. Johnson Center for Philanthropy at Grand Valley State University conducted its fifteenth annual VoiceGR community survey. On March 3, 2016, Grand Valley released the results of the survey, clearly gauging public opinion, attitudes, and perceptions about various aspects of the Grand Rapids community in words, bar graphs, and an easy-to-use interactive map.

“We want the information to be comprehensive and representative of our community, in addition to being as accessible as possible, for everyone to use,” said Dr. Jodi Petersen, director of the Community Research Institute at the Johnson Center for Philanthropy and lead researcher of the VoiceGR survey.

The Voice GR survey connects demographic information to various topics, measuring public opinion on everything from ability to meet basic needs, education, and racism in the city.

One area studied in the survey is city resident’s perception of Grand River water quality. Another is how much of a priority citizens consider the issue of water quality.

“We do see that some of our respondents on the near south and the near west side are a little bit less engaged with some of the neighborhood efforts and ratings of neighborhoods,” Petersen said. “They also tend to rate [water quality] a little bit lower.”

People who indicated pollution in the Grand River and its tributaries as an issue of priority were generally concentrated in neighborhoods in the north end of the city, with several in the southeast end. Additionally, particularly high ratings came from Lake Eastbrook, with 91.7 percent of respondents rating the issue as a priority, and Millbank with 88.2 percent of respondents rating pollution as a priority. And the neighborhood with the greatest proportion of respondents, with 100 percent rating water pollution in the Grand River and tributaries as a priority, was Fulton Heights. 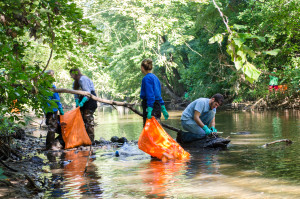 Although perceptions of the Grand River’s water quality vary, regular river cleanings are necessary as pollution and litter remain a key issue

“One of the things we’ve seen is that people who are better able to meet their basic needs also rate the city as a better place to live,” Petersen said. “But the people who are less able to meet their basic needs also rate water quality as a lower priority, which may mean that there’s a lot more on their plate that they need to take care of, so those sorts of things just don’t register to the level of issue as some of the other things that they’re dealing with.”

As for how people perceive the quality of the Grand River’s water, the highest rating, or excellent, was given by 20 percent of respondents in Lake Eastbrook, and by fewer than that in every other neighborhood. Interestingly, Lake Eastbrook was also one of the neighborhoods that most considered pollution in the Grand River and tributaries a priority—with 91.7 percent of respondents rating it as such.

Michael Ryskamp, Program Coordinator of Plaster Creek Stewards, suggests that proximity to a vulnerable water body encourages residents to be not only aware of its properties, but also to care about them.

“If I had to guess, I’d say that the Lake Eastbrook residents place a high value on water quality because they can’t help but notice the water they live near, the quality and quantity of which having great potential to affect their quality of life,” he said.  “Most of us can get through our day without thinking about the water quality of local water bodies.”

The most common ratings of the Grand River’s water quality, split by neighborhood, were “good” or “fair.” The lowest rating, “failing,” was given by, at most, 17 percent of respondents, which was the case in the Black Hills neighborhood.

“We are interested  to see whether people’s concerns about water quality will change this year, particularly since water quality has become an intimately crucial issue to Grand Rapids’ neighbors in Flint,” Petersen said. She surmised that opinions may differ this next year, as people begin paying closer attention to water quality. And as the Rapids Restoration plan moves forward, water quality will continue to remain in the spotlight.

OPINION: Michigan needs to form its own plan for clean power
Scroll to top