Environmentalists and Evangelicals are increasingly finding common ground. One issue where the alignment has blossomed into a full partnership is advocacy for clean and efficient energy. For the last several years now groups like WMEAC and the Christian Coalition of Michigan have been working together to ensure that the state implements strong clean energy policies. Both groups advocate for clean energy with Michigan Energy Michigan Jobs Coalition.

While many environmentalists tend to prioritize the ecological impacts of fossil fuel consumption, the national security implications tend to draw Christian conservatives to the issue.

Speaking with the West Michigan Environmental Action Council, Keith den Hollander, Chairman of the Christian Coalition of Michigan, described how the reliance on oil in the economy could prove detrimental in a variety of ways. Den Hollander cited the CNA Military Advisory Board, which has studied the impacts of a prolonged disruption of the Strait of Hormuz. Den Hollander’s group is concerned about the ramifications that conflict near the Strait would have on the United States. 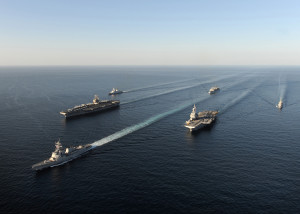 The implications of this dramatic increase would be manifested in other ways than just at the pump. “How long could our trucks stay on the road shipping our goods and supplies to people?” he asked. The current food system is predicated on interstate shipping. The rise of fuel prices would be passed along to the consumer in the grocery store. Other areas of the economy that rely on a similar infrastructure would experience a similar dilemma.

In a report entitled “The Economic Implications of Disruptions to Maritime Oil Chokepoints,” the Naval Advisory Board examined key routes from oil-producing to oil-consuming countries. The Straits of Hormuz and Malacca were chief among their concerns. The researchers included a quote by Admiral Mike Mullen saying, “The analysis I have seen certainly indicates that they [Iran] certainly have the capabilities which could certainly hazard the Strait of Hormuz.”

The report concluded saying: “We find that a few industrialized countries — not including the U.S. — would enter a sudden, steep recession if major oil disruption occurs and the countries with large strategic reserves do not share them with the rest of the world.”

Although these findings suggest that a prolonged disruption is unlikely, it is worth noting some historical precedence. Since the 1973 Arab Oil Embargo, American presidents have spoken of energy independence. Indeed, many countries, including China, have increasingly sought to diversify their energy portfolios to avoid possible losses of energy and economic stability.

While the United States has subsidized many aspects of fossil fuel production, den Hollander discussed the shock that many Michigan State Representatives had when they learned that fracking, for example, was subsidized by the Department of Defense. While den Hollander is not typically in favor of subsidies, he said that renewables should be given the same treatment that fossil fuels have received in the past. For den Hollander and the Christian Coalition, diversification means that the United States would have to concern itself less with defending energy supply routes.

“We’re saying, ‘We don’t need to entirely divest ourselves from coal.’ We’re not of that mindset,” he said. “We need to have a balance in that portfolio.” While noting that each energy source has its drawbacks, den Hollander stressed that a combination would reduce risks for both the country and Michigan.

Speaking about the environment as a political issue, den Hollander said, “This should be one of the things we can find common ground on. Maybe not for the same reasons,” he said. “If I’m taking action on energy policy because it makes economic sense, because it makes national security sense, because it makes clean air and clean water sense, it shouldn’t matter why.” For some, he explained, the climate is a motivating factor, for others the economy is. “We should care less about people agreeing with us for our reasons and care more about whether we’re getting the desired outcomes we’re seeking.”