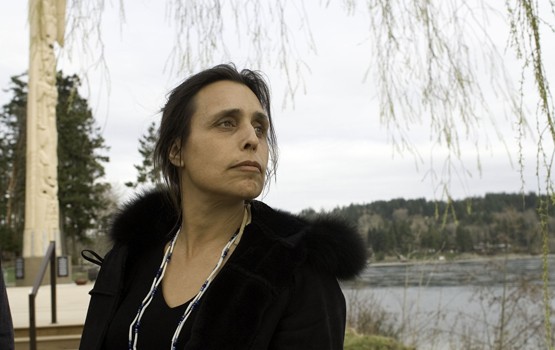 Winona LaDuke is a Native American environmental activist, economist, and writer. Born in Los Angeles and raised in Southern Oregon, Winona holds a degree in rural economic development from Harvard University. She currently resides on the White Earth Reservation in Northwest Minnesota, home to the Ojibwe people, from which she descends. Winona is the founder of the White Earth Land Recovery Project and executive director of Honor the Earth, an organization that strives “to raise awareness and support for Native environmental issues and to develop needed financial and political resources for the survival of Native communities.”

On Tuesday night, November 12, I had the pleasure of sitting down for dinner with Ms. LaDuke before her talk at Aquinas College on food sovereignty. It was an incredible opportunity to meet a woman who has been a leading political activist for Native people almost from her infancy. I was struck by both her wisdom and her humor. Conversation among the group traveled from how to inspire people to get involved in political movements to birth order and its effects on child development. Considering my own anxiety and inability to generate “small talk,” I truly appreciated Winona’s ability to effortlessly connect and engage with the group, which I am sure is a trait that has served her well in her activism and advocacy.

The biggest impression Winona and her food sovereignty talk left on me is the importance of narrative in connecting people with social and political movements. Winona has an incredible ability for storytelling and much of her talk weaved between scientific and anecdotal evidence. I believe this grounded the discussion of climate change and sustainability, which can be alienating to those who do not understand the science. It is important to discuss how unsustainable practices are affecting us now and not just in the future. Winona does that by describing the way Native communities have been affected by, and will be affected by, industrialized farming practices in the past, present, and future.

If you were unable to attend the November 12 event, I would highly suggest you watch this TEDx talk where Winona presents a similar argument for food sovereignty and sustainable agriculture. I fear my own discussion of these issues would take away from the story-telling I find so important to her argument. If you are interested in learning more about Winona LaDuke’s work on Native American rights and food sovereignty, check out Honor the Earth and the White Earth Land Recovery Project. Her books are available at many local retailers, including Schuler’s Books.