On Tuesday, June 27, a “who’s who” of local environmentalists, politicians, and community members attended the public launch of  WMEAC’s You Are Here Campaign, held at The Rapid Operations Center in downtown Grand Rapids.

The year-long $886,000 advancement campaign is designed to emphasize WMEAC’s connection to West Michigan residents who value environmental protection and preservation, while highlighting programs that will directly impact the quality of life for West Michigan residents. WMEAC officials hope that the funds raised will help expand efforts to meet today’s environmental challenges.

Attendees of the event were encouraged to tour the newly-renovated Rapid Operations Center, where the announcement took place. The $31 million facility includes a 40,000-square-foot “green” roof.

Local reporter and You Are Here Campaign Cabinet Member Tommy Allen explained that the campaign is designed to continue WMEAC’s role as a community watchdog organization, monitoring environmental issues in the West Michigan.

“We need champions in our community that will hold us accountable to green standards. We need observers on a local and state level. This campaign will help us achieve those goals,” he said.

Former congressman and long-time WMEAC supporter Vern Ehlers was on hand at the event. In his address to WMEAC donors and members, he noted his past political involvement in environmental issues and praised WMEAC’s long-standing commitment to protecting the environment and natural resources in the region.

“I’ve had the pleasure of working on this campaign with both Republicans and Democrats. Environmentalism isn’t about partisan politics,” LaGrand said.

WMEAC officials’ and members hope that in addition to raising money to support new environmental programs the campaign will be a coming-out party of sorts, helping to foster an interest in environmental stewardship and inspire a sense of community among West Michigan residents.

WMEAC encourages residents to submit their own personal thoughts in the form of photos, videos and essays about what makes West Michigan’s environment special at on the You Are Here website.

This article first appeared on therapidian.org. 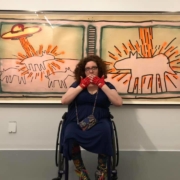 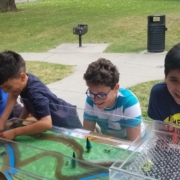 This Precarious Space Together: A Conversation with Jessica Stokes