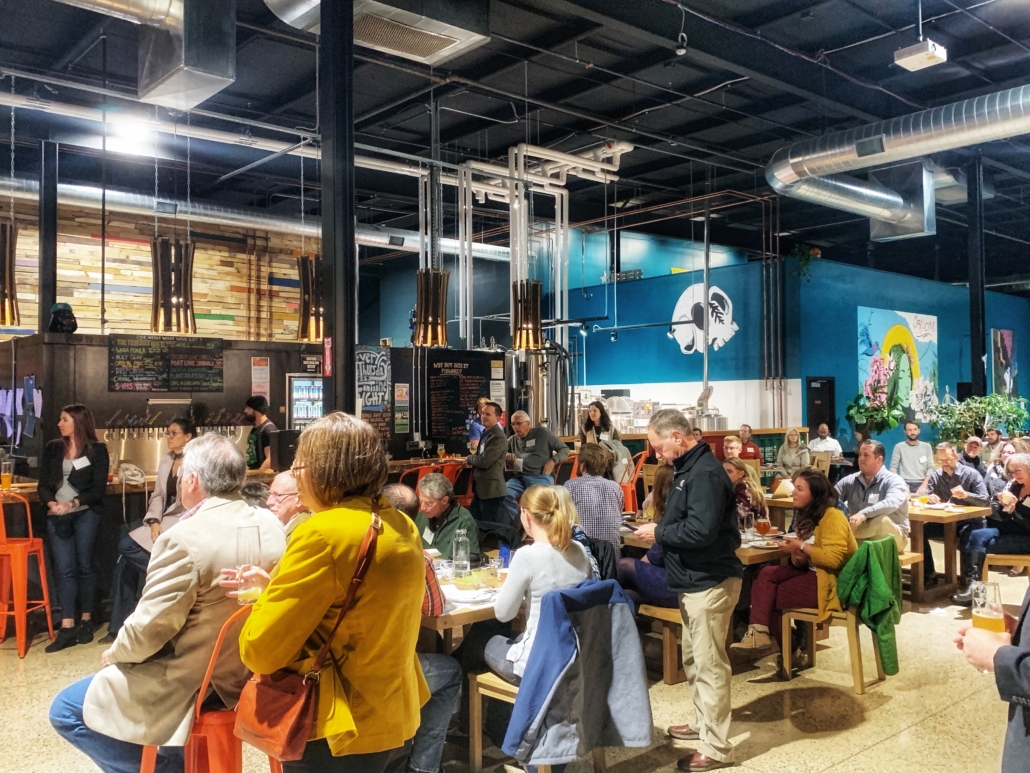 WMEAC’s annual meeting an evening of celebration and looking forward

WMEAC’s staff, board, members and friends met to review the year and hand out awards to those who have done the most to further WMEAC’s mission this year. The group of about 100 met at Broad Leaf Local Beer to not only look back, but ahead to WMEAC’s future.

WMEAC’s past year and future

Bill Wood, WMEAC’s executive director, highlighted several of the past year’s victories. The Teach for the Watershed program reached 3,000 students this year. The Mayor’s Grand River Clean Up removed more than 5 ½ tons of trash and recycling. Wood marched and spoke in St. Paul and delivered a letter to Minnesota’s governor on behalf of WMEAC as part of a broader campaign in Minnesota against Enbridge Line 3. Later, the state denied a needed permit in the company’s attempt to replace and reroute the crude oil-pipeline.

Wood also highlighted a broadening of WMEAC’s vision to include a greater focus on climate change. He said WMEAC plans to step more forcefully  into advocacy and leadership on the issue with a focus on justice. He noted that last winter’s polar vortex kept thousands of local low-income students out of school for nearly two weeks and many of those students’ families rely on school meals.

A focus on justice and inclusion was highlighted in new board president Lin Bardwell‘s remarks. She opened the meeting with an acknowledgement that the land the group was meeting on the ancestral land of the Three Fires tribes: the Ojibwa, Odawa and Potawatomi. WMEAC’s staff is also in ongoing training and conversation about what it means to decolonize their environmental work.

The Joan Wolfe award for contributions over a number of years went to Don Triezenberg, a long-time supporter of WMEAC and board member, for his work in making WMEAC a stronger organization. It’s work Triezenberg believes is important, especially in the face of growing environmental challenges like climate change.

“You’re going to need as strong an organization as we can make in the coming years,” he said.

Jeff Seaver, an activist opposing the Grand River Waterway, the plan to further open the Grand River from Lake Michigan to Grand Rapids by dredging it, won Activist of the Year. Elaine Isely, director of water programs, recounted how Weaver “got fired up” and rallied opposition to the project.

Seaver acknowledged the support WMEAC provided him and hundreds of others. He warned that, though the project is stalled, “there’s no guarantee it won’t go forward next season.”

Volunteer of the Year went to George Kuiper, for indefatigable work with the Mayor’s Grand River Clean Up, a yearly trash clean up event.

“He arrives there before the sun is up,” said Mary Robinson, WMEAC’s director of development, and stays “when others have gone.”

Tom Gibson, a teacher at the Public Museum School in Grand Rapids, won Educator of the Year, for preparing his students for “the emerging problems they’re going to inherit,” said Kyle Hart, WMEAC’s education coordinator.

Bryanna Lee, a communication intern at WMEAC was awarded Intern of the Year for her work over the summer and beyond the term of her internship.

The final award of the night, the CR Evenson Award for long-term dedication and contribution to environmental protection in Michigan went to Peter Gustafson for his role as WMEAC’s representative on the Pigeon River Country Advisory Council, the managing body for the 10,000 acre Pigeon River Country State Forest in northeast Michigan. When Gustafson leaves the council later this winter, Bill Wood will replace him, pending his appointment by the director of Michigan’s Department of Natural Resources.

The meeting happened at Broad Leaf Local Beer, a location opened by Brewery Vivant less than a year ago. Brewery Vivant, as a sustainability-minded business and B Corporation, has had a relationship with WMEAC for years. Later this year, Broad Leaf is hosting a WMEAC rain barrel workshop. Register to build a rain barrel from a bourbon barrel on December 12.

PrevPreviousWhen it rains, it shines
NextLocal business greens up operations with compostingNext