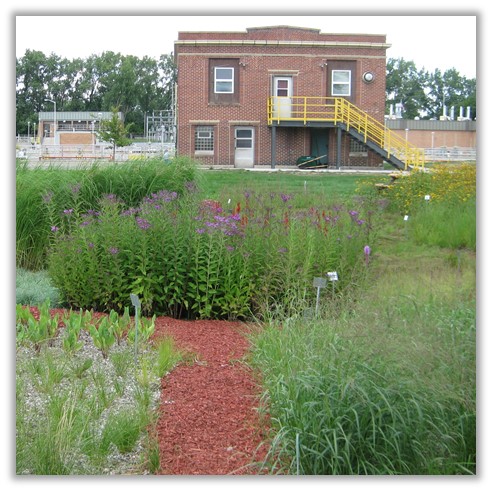 Grand Rapids Sets Out Their Standard For Controlling the “First Flush”

Every time the rain falls, it rinses clean the roofs, streets and gutters. The first inch of any rainfall has a higher concentration of pollutants than the rest, and has been called the ‘first flush’. Efforts to capture and filter these first-flush gallons help to keep rivers and lakes cleaner. Grand Rapids has no small amount of first-flush fluid, either.

“Just some basic calculations gave us 10 billion gallons a year,” said Carrie Rivette, the Wastewater and Stormwater Maintenance Superintendent for the City of Grand Rapids.

The newly approved Green Infrastructure Portfolio Standard (GIPS), the first of its kind in the country, is a plan to measure additional green infrastructure the City of Grand Rapids will construct and count toward the goal of 1 percent more stormwater infiltrated through green infrastructure every five years. That amounts to 100 million more gallons soaking into the ground through permeable pavement, bioswales and capture tanks rather than being washed into the Grand River, keeping pollutants from the yards and streets of Grand Rapids from entering the watershed. GIPS also establishes the goal of treating an additional 25 million gallons of rainwater runoff every 5 years in the form of filtering infrastructure.

These benchmarks, in order to keep them reasonably attainable, were established based on the projects the City of Grand Rapids has already completed in 2015, the first year of Vital Streets work. Vital Streets is a Grand Rapids initiative to improve the safety and usability of Grand Rapids streets through continued renovation, and includes standards for including green infrastructure like bioswales, tree canopy and permeable pavement.

Other projects will count toward GIPS standards include underground catch basins like those under Joe Taylor Park and Mary Waters Park. Mary Waters Park alone can hold 720,000 gallons of water until it can soak into the ground through the basin’s stone bottom. Over the course of a year, that amounts to an estimated 11.3 million gallons of first-flush water saved from entering the Grand River.

The City of Grand Rapids’ Environmental Services Department is already getting prepared to meet the next benchmark. They have a third-party study completed about where the next major project could be constructed.

“Areas that are at the bottom of a hill, collect a lot of stormwater, have the proper soils, are publicly owned, so we have a list of probably seven or eight projects and then we’ll see how they line up with other capital improvement projects,” Rivette said.