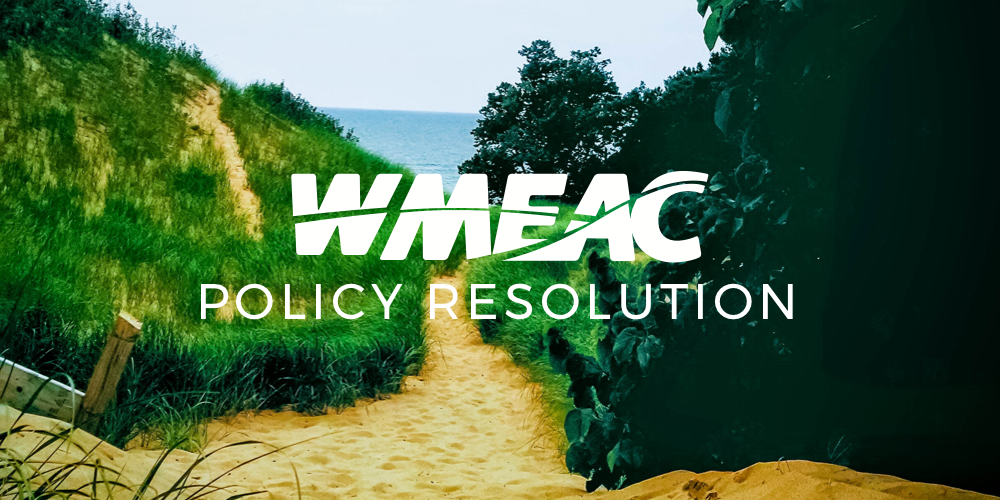 The BOD further directs WMEAC staff and the ACT Committee to raise awareness of this issue with its members, local and state officials, and relevant partners and encourage them to stand against this project as well.

The “Grand River Waterway” project proposes to dredge a 22.5-mile section of the Grand River, from Fulton Street bridge in Grand Rapids to the Bass River Recreation Area in Ottawa county. In 2017 a Feasibility Study was conducted by Edgewater Resources LLC on behalf of the State of Michigan. The study reports that the proposed project requires achieving an average water level of 7 feet throughout a 50-foot wide channel, which would require the removal of almost 100,000 cubic yards (CY) of dredged material. This would in theory allow boats up to 26 feet long to travel the 40 miles from Grand Haven to Grand Rapids. While this stretch is designated as a navigable waterway by the U.S. Army Corps of Engineers (USACE), only the 17 miles stretching from the Bass River inlet to the Grand Haven Harbor are regularly maintained by USACE, and “The remaining reach of unmaintained waterway is nearly 23 miles long and is scattered with abandoned pilings, structures, and areas of extensive shoaling making it unsafe for recreational navigation beyond shallow draft vessels”.

Though it is currently considered a “State funded activity” this project has been spurred on by the organization Grand River Waterway led by Dan Hibma a real estate developer in the area and husband of former Secretary of State, Terri Lynn Land. In 2018 Grand River Waterway commissioned an Economic Assessment of the project from Anderson Economic Group LLC. The report concludes that the dredging would cost about $2.1 million initially and $165,000 in annual maintenance and upkeep. They projected that it would produce $5.7 million annually in economic impact. To date, $3.15 million has been appropriated to the project by the Michigan Legislature, including $2 million during the 2018 “lame duck” session of the Legislature.

However, opponents to this project have cited a number of reasons as to why this project should not move forward, or at a minimum, receive greater scrutiny. The reasons range from a lack of community involvement in the process, to under reporting of the true costs to dredge and maintain, conflicts with investments made to enhance existing uses of that stretch, the fact that dredging there has been considered multiple times and even tried once and failed, and a myriad of environmental concerns, among others.

Though each of those issue areas together build a compelling case against this project, given WMEAC’s mission, vision, and values the primary justification for opposition to this project will focus on the environmental and utilization issues which include but are not limited to:

Dredging is a threat to aquatic and riparian habitat: In a recent MSU Extension and MI Sea Grant white paper looking at the impacts of dredging on the Grand River, researcher Dan O’Keefe noted, “River channelization will not return the Grand River to its natural state. This reach of the Grand River was shallow prior to dredging attempts that began in 1886.” Moreover, he notes, channelization destroys benthic habitat that supports the base of the food chain and shallow riffles and gravel bars that many fish species require for successful spawning. The Michigan DNR’s 2015-2025 Wildlife Action Plan identifies dredging and channelization of rivers as one of the top threats to wildlife because it decreases habitat diversity, causes loss of natural aquatic vegetation and floodplain habitats, can lead to bank instability and erosion, and increased chances of sediment transport.

Dredging can severely impair water quality: Dan O’Keefe summarized available scientific literature and suggests that dredging will not improve water quality in the Grand River. He notes that a flawed comparison was made in the Grand River Waterway’s Economic Assessment by comparing their proposal to channelize for navigation to the dredging by the EPA in the Ottawa river in Toledo, OH where the process was designed to remove PCBs and PAHs. Dredging to channelize a river typically leads to increased turbidity and dirtier water and threatens to unlock trapped contaminants that may have accumulated from decades of industrial activity, sewage discharge, and abandoned landfills or other contaminated sites which border the river.

Dredging would undo investments to enhance existing uses: Ottawa County has invested $20 million to preserve over 2,400 acres of land and create 13 parks and open spaces to create a “Greenway” along the river corridor and has plans for an additional $21 million. In addition they have invested in the Grand River Heritage Trail which runs 44 miles, has 18 access points, 3 of which include universally accessible launches, and it highlights 60 cultural and historical features along the trail. This projects ties into the larger West Michigan Water Trail initiative which WMEAC has helped to develop. Municipalities have also directly invested in water quality improvements, including Grand Rapids $400M combined sewer separation, so that all citizens have safe access and not just for the benefit of a select few.

PrevPreviousA Ten Day Hike Through New Mexico: Environmental Justice and Decolonizing Outdoor Spaces
NextHow dirty is the Grand River? Not as Bad as You Might Think.Next