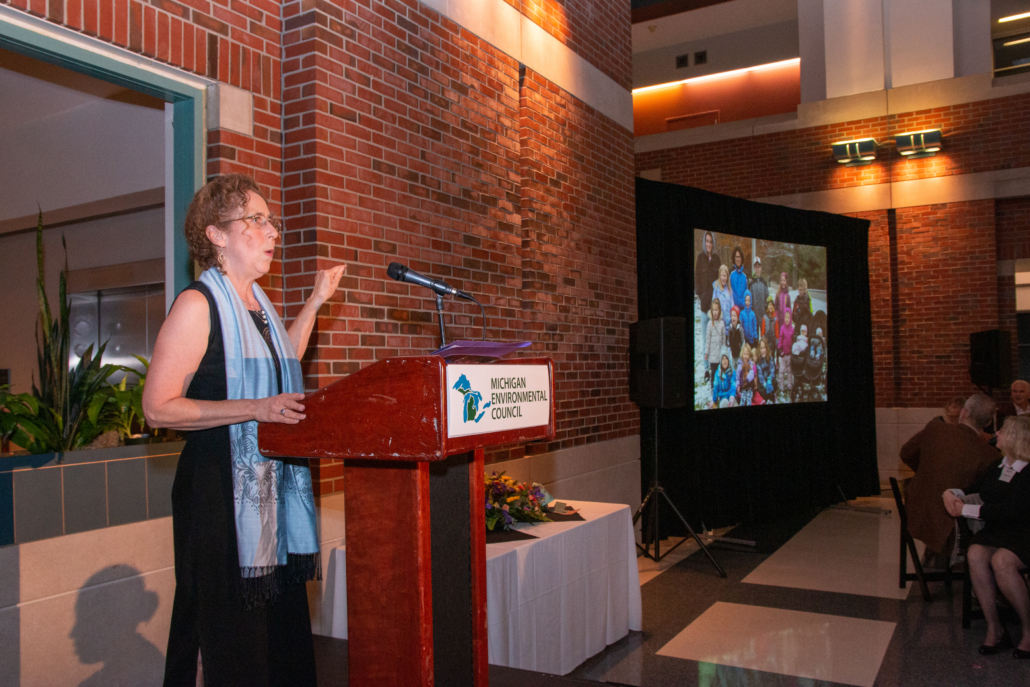 That’s one way to care about your local community, said Lynn McIntosh, who knows a thing or two about keeping an eye on local environmental issues.

That knowledge was hard earned, purchased with hundreds of hours of volunteer sleuthing, a self-education in the world of environmental regulation enforcement, and perseverance in the face of near town-wide pushback as she methodically exposed contamination at the Wolverine Worldwide Tannery site in Rockford, Michigan.

This near-decade of volunteer watchdogging and advocacy earned her this year’s Petoskey Prize for Environmental Leadership from Michigan Environmental Council. She acknowledges she did a lot of work in seeing this project through. She also gives credit to the people she met at the right time who also recognized the issue’s urgency.

When McIntosh became suspicious that the tannery demolition wasn’t accounting for the site’s toxic soil and waste, she spent years documenting the process by taking photos, requesting documents and even following trucks carrying excavated soil to unlicensed dumping sites.

She knew if someone didn’t see the project through, people could get hurt. She keeps a photo of children whose water was contaminated by the tannery’s toxic waste as a reminder that her work was helping people.

“We didn’t know who they were, but we were worried about them. And that’s why we continued,” she said. “We had heard about real people getting sick and dying. Children in those locations. And we found out that these people were on well water and the wells hadn’t been tested.”

McIntosh says her role was, in part, a case of being in the right place at the right time. She first acted as an environmental watchdog after seeing asbestos dust waft in clouds from a nearby house demolition toward other, still-occupied homes. That event provided a crash-course in the ways environmental regulations can lack teeth and the ways concerned citizens can help ensure that polluters are held accountable.

After the house demolition taught her to document with photos, timelines, and public records, a much larger demolition project would put those skills to a nine-year test. When Wolverine Worldwide announced they would demolish their tannery in downtown Rockford, Michigan, McIntosh was concerned.

She said she instinctively knew the land was contaminated, so she carefully documented the demolition process, through push-back from the company, the city, and the state.

It was a lot of work. But she’s also quick to acknowledge the others who did what she couldn’t do. From the scientist who did early research on PFAS to the reporter who was so instrumental in bringing the issue to light, McIntosh sees herself as part of a larger relay. Even if she had to run a couple of extra laps in the middle, she couldn’t give up because she knew the issue had to be exposed.

McIntosh is getting ready to give up the starring role to others who are ready to step in and maintain the momentum. It’s why she gave the $5,000 prize to the Michigan PFAS Alliance so the work can continue.

“There’s momentum there,” she said. She’ll still be involved but believes in the other concerned people who will sustain momentum and avoid cynicism and defeat.

“When you rise above it and you don’t let yourself get into becoming cynical or jaded…It’s like an airplane above the clouds. Then you can see the lights,” she said. Meeting the right people at the right time “was like this constellation, this relay of light above it all.”

That constellation of support continues to grow as more people rally to the cause to protect the Rogue River and the wells people drink from.

It was love of water and the affected people that kept her on the trail of contamination for all those years.

“You know something’s wrong. You see it and you can’t turn the other way.”

PrevPreviousYouth Show Up Strong at Rise Up + Drawdown Conference
NextWhen it rains, it shinesNext