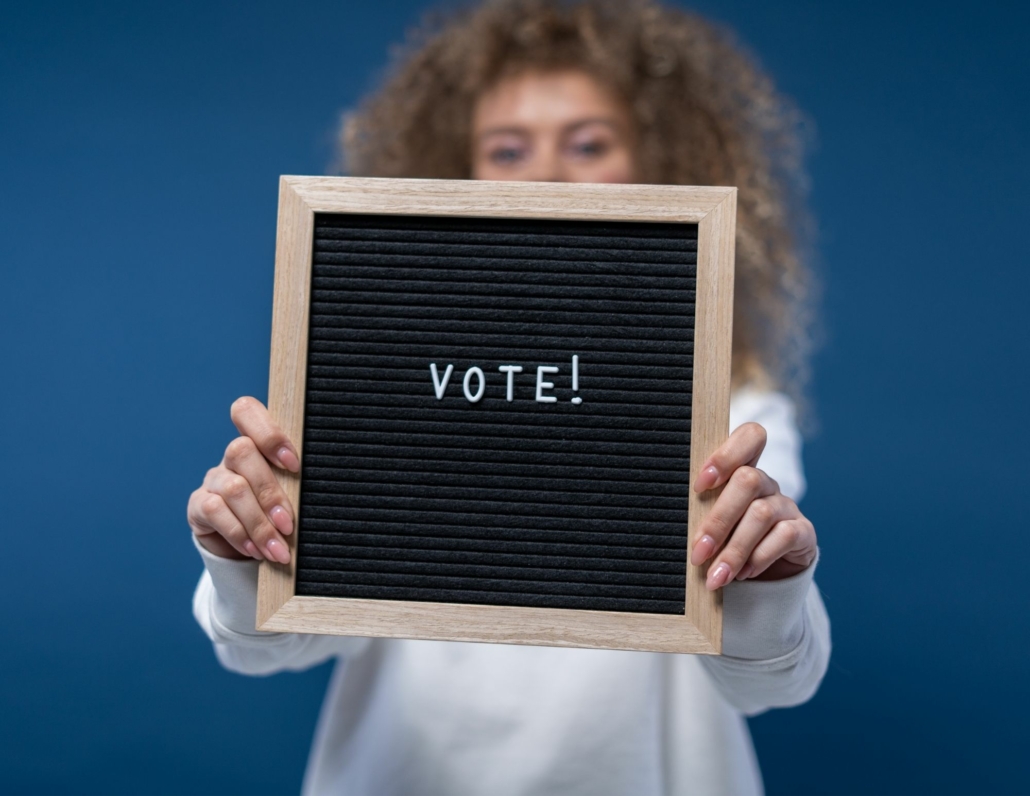 The Importance of Voter Registration Amongst Young Adults

This time, four years ago, the majority of voters made their way to the polls and voted in-person. Masks, disinfectant sprays, gloves, and staying six feet away from others was something out of the ordinary. Around Election Day, voters watched as the debates heated up with an array of topics important to U.S. citizens. Watchers from home are used to seeing a crowd in the background of a debate, but this year the crowd was obsolete.

Because of COVID-19, the experience of voting and voter registration may be a bit different than the years prior because of health restrictions aimed to protect the general publics’ welfare.

Wayne State University senior Alice Fahy is not a first-time voter and is excited to express her right to vote.

“Each time I vote feels more important,” said Fahy, 21. “It feels less overwhelming. The poll workers are friendly and can help when you get confused, which is reassuring. The fact that I was able to get another form if I made a mistake was reassuring to me. It is intimidating to see how large the form is.”

Fahy is not the only one who believes in the process of voting to be intimidating at times. Students from the University of Michigan and Western Michigan University share similar beliefs about the voting process.

To the question of, “Does my vote matter?” The answer is yes. For example, between the years of 1791 to 1838, Black males who were free from enslavement lost the right to vote in Pennsylvania and New Jersey. By the end of 1828, opinions in favor of “universal male suffrage” gained the most support. For Native American males to vote in 1887, they had to “disassociate” from their tribe, according to the Dawes Act.

Throughout the Jim Crow era, many Black Americans were faced with systemic disenfranchisement at the polls. This means that Black people were deprived of their legal right to vote on purpose. Black Americans were faced with ludicrous tests that were made to be “impossible” for fully literate people, according to South Carolina’s “eight-box ballot” theory. Along with tests, terror acts; where residents would knowingly instill fear into Black Americans trying to vote, was a popular fear tactic to disenfranchise Black people.

Many southern states followed Mississippi’s attitude towards Black rights by creating tests that would make Black Americans recite the constitution in full. Voter suppression did not suddenly end in 1870 with the 15th Amendment that made it illegal to discriminate based on creed, religion, or race. Voter suppression sneakily lived on and by 1892, Mississippi cut the percentage of eligible Balck men, voters, to less than six percent. It was 90 percent before the cut, according to the National Geographic website.

Some examples of voter intimidation may include but are not limited to aggressive questions towards voters; spreading false information about voter requirements, blocking polling places, harassing voters while they are in line, photographing or videotaping voters without consent, and discriminatory harassment towards people of color and non-English speakers, according to WZZM13 ABC News.

In present times, voter suppression shows itself across the nation in numerous forms. In St. Petersburg, Florida, two armed people dressed up as security guards and said that they were hired by President Trump’s campaign. President Trump’s team said they had no history of hiring them, according to USA Today.

In Memphis Tennessee, a poll worker was let go after prohibiting people to enter with “Black Lives Matter” apparel on. A similar situation happened in Georgia when an older man was told to take off his BLM shirt to vote at the polling site, according to USA Today.

In Detroit, false mail requests and robocalls were made by two men to instill fear in the Detroit metro area, which is mostly Black, according to USA Today.

These are just some of the voter suppression instances that happened in the year 2020. Your votes matter because as an American, you are given this right to make an impact on the nation just by the act of using your voice.

According to the National Geographic website, your singular vote may not single-handedly elect a president, but joined with others, it can. Voter suppression did not stop during the late 1800s and that is why it is vital to acknowledge the privilege voting holds for straight white men since the constitution was introduced. Remember to acknowledge the many ancestors before you who fought to have your very right to vote on Election Day.

Many people in other countries across the world do not have the privilege to elect their leaders. In the past, as mentioned before, some Americans did not have the right to vote until 1870. Even after 1870, women, people of color, and indigenous peoples had trouble accessing the right to vote. To pay homage to the hard work many have done to give us the right to walk into a polling station, communities can take one vote and have a big voice.

To follow more about fighting for voting rights, ballot access, and voter protection, organizations like State Voices are actively working daily to fight for marginalized groups.

Their message is: “To ensure Black people, Indigenous people, other people of color, currently/formerly incarcerated people, youth, and low-income people have access to civic engagement.”

You can find State Voice’s work by accessing their different voter protection tables in Florida, Georgia, Pennsylvania, Ohio, Wisconsin, and Michigan. According to State Voices, several of the state tables listed succeeded in creating helpful voter protection programs in 2016.

The website to find more information on their Michigan table can be found at https://www.statevoices.org/state-tables/michigan/.

If you are not 18 yet or not a U.S. citizen, you can still take action by talking to friends and family members and directing them to the needed instructions. You can still enact change by researching, informing others, or volunteering for your preferred party and campaigning for them.

To vote these days, a person can register from the comfort of their own home. For example, registering to vote can take a couple of minutes just by checking your state’s rules and following the needed steps listed here. Even if you do not have a driver’s license, you can still register using the last four digits of your social security number (SSN), according to the Voter ID Laws by Vote.org.

If some choose to stay away from voting polls and city halls, the option to vote by mail is readily available. According to USA.gov, the National Mail Voter Registration Form can be downloaded on-screen and printed. The form can be signed and mailed to the location you may reside in.

Because the election is only mere hours away, potential voters still have the chance to do same-day voter registration in some states. According to the National Conference of State Legislatures, as of 2020, 21 states and the District of Columbia allow same-day registration (SDR), which would allow a qualified resident of the state to register and cast a ballot on the same day.

According to the official website of Michigan.gov, Proposal 3 passed in 2018, which established a “no deadline to register to vote in the State of Michigan, but early registration is always encouraged.”

For University of Michigan sophomore Annie Smuts, the voting registration and experience was smooth but can be hectic at times.

“It was pretty smooth,” Smutz, 19, said. “I requested my absentee ballot online and then had to wait a few weeks for it to come, but when it did, I filled it out that day. Our school has a ballot drop off box and I dropped it off on campus.”

Alice Fahy, on the other hand, chose to vote on November 3rd at her polling location in Troy, MI.

“There was no real reason why I chose to vote in person,” Fahy said. “I feel confident in the mail-in-ballot option, but I also remember that the last round of voting is usually quiet. I know I won’t feel nervous because my polling location has always been quiet.”

Across Michigan, young adults are taking the initiative to vote and get their surrounding circles to vote as well. Although young voters are consistently posting to social media and holding community talks, some college students fall short.

When asked about voter privilege and how some may not believe voting is a privilege, students from different universities had similar responses.

Western Michigan University junior Lindsay May, 21, said she has encountered people who have “no interest” in voting because it does “not concern them,” and has felt shocked by the statements.

“I have encountered someone completely disregarding the importance of voting,” May said. “Even though I am not big in politics and it is my first time voting, it is still smart to vote. We get an opportunity to decide who is the best fit and it may not concern some personally, but it counts for all of America. It is not only for the little bubble that some of us grew up in, it is for everyone.”

Because May is originally from Illinois but resides in Kalamazoo for school, May’s parents had to drive from Illinois to bring her the ballot she needed.

“A lot of the names looked unfamiliar, but having party affiliation helped me push myself in the right direction,” May said. “I felt intimidated at first, but then I researched more and felt comfortable.”

WMU sophomore Kristen Faith is still waiting to send in her absentee ballot before Election Day.

“I have not dropped off my ballot yet, but I will be doing so soon,” said Faith, 19. “Voting is important to me. As a woman, some of our rights are on the line during this election. This is my first time voting and I have big expectations because I hope everyone can make the best, informed decision.”

If you or anybody you know is still on the fence about voting, Michigan has no deadline for same-day registration and voting. There is still limited time to research, inform, and volunteer for the importance of voting. If you have more questions on where to vote or if you are eligible, you can find out the needed information at https://mvic.sos.state.mi.us/Voter/index.