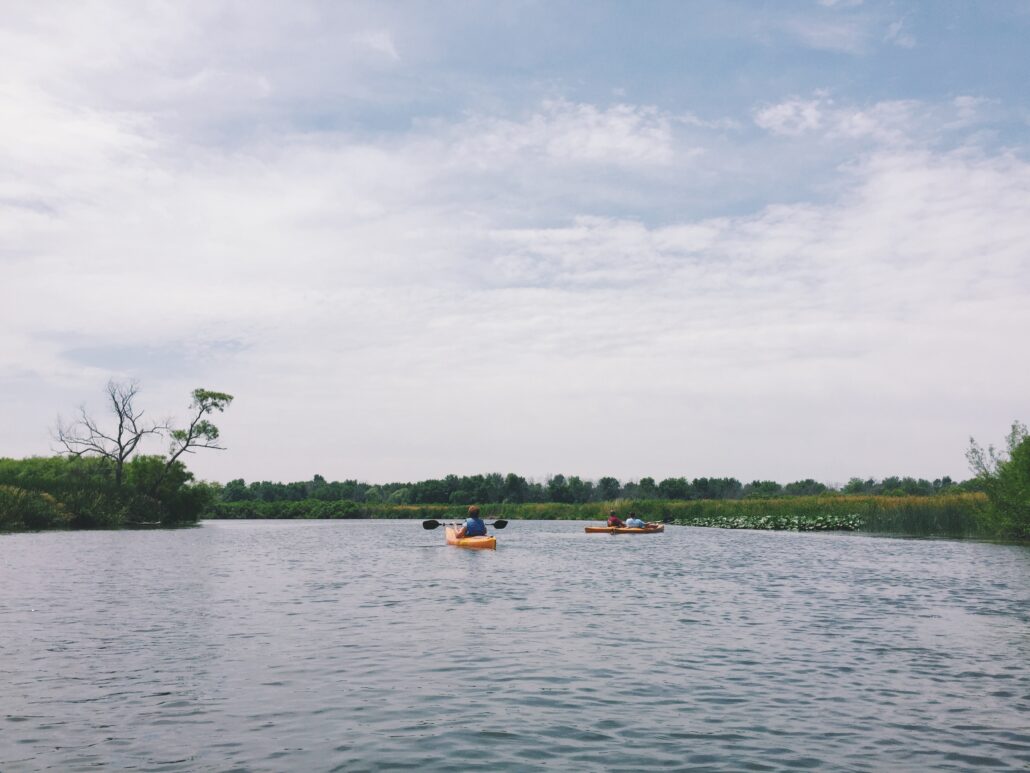 The Grand River Expedition is a two-week long paddling experience that celebrates the Grand River, occurring every ten years. Through community driven, educational and outdoor activities and events, the Expedition aims to inform and connect the public to the Grand River. Due to the COVID-19 pandemic, the 2020 Expedition was cancelled and the 2021 Expedition will be quite different, though not any less exciting.

Verlen Kruger and His Love for Paddling

The Grand River Expedition started with Verlen Kruger. He was born in Pulaski County, Indiana in 1922, but it wasn’t until 1963 at age 41 that his prolific paddling career began. Kruger’s life was quite ordinary up until then. He married and divorced a few times, had nine kids, and ended up remarrying his first wife. He enlisted in the military and eventually settled down in Lansing, Michigan.

Kruger’s first time in a canoe didn’t produce many stories, but it’s obvious that something in that journey ignited a passion. Throughout his paddling career and before he died in 2004, Kruger covered over 100,000 miles in his canoe. According to Brook Sutton in her profile piece about Kruger, this would be paddling everyday for 19 years and Kruger accomplished this in just his 41 years of paddling. Kruger partnered with a friend to create and finish what they called the “Ultimate Canoe Challenge” – a 28,040-mile path covering all over North America. He did trips beginning in northern Alaska and ending in Cabo San Lucas, Mexico; Montana to Michigan; from the U.S. coast to coast, paddling through oceans, lakes, rivers, sometimes even upstream).

The History of the Grand River

Why did this renowned canoer end up creating the Grand River Expedition in 1990? Well, that begins in 1830, about a century before Kruger. The Michigan Department of Natural Resources in their assessment of the Grand River stated that this is when humans first began altering the Grand River and its tributaries. Canals and dams were built, the river was used to power sawmills and grist mills, and for transportation. From there, industrialization, agriculture, and logging skyrocketed; and of course, with that comes pollution.

In 1889, the Grand River was described, in a powerpoint presentation by Fred Cowles, as, “covered with a green odiferous scum, mixed with oil from the gas works,” and pollution only got worse in the first half of the 20th century. All the trees were gone, and wastewater was dumped directly into the river and most of its tributaries. The biodiversity of the river declined, leaving only pollutant resistant organisms, like the common carp. It wasn’t until the 1960s or 1970s, when water pollution laws were passed that pollution began to decrease. In fact, by the 1990s the Grand River had mostly recovered.

Despite this miraculous recovery (yes, miraculous), most people who lived around the river believed that the water quality was the same or getting worse. This included Kruger’s wife at the time, despite her also being a paddler. Because Kruger loved the Grand River, he paddled on it extensively and often. When he realized that most people were unaware of the history, geography, and present condition of the river, Kruger and his wife hosted an educational event to inform people about the Grand River.

In 1990 from August 13th to the 25th, they conducted and participated in the first Grand River Expedition. They started upstream of Jackson and paddled to Grand Haven. It was an opportunity for people to explore and document the Grand River watershed. Around 110 people participated and attracted extensive press coverage. Because of the success, Kruger planned another expedition in 2000. 40 canoes paddled the entire way with 70-90 canoes joining for day trips.

Kruger passed away four years later, but that didn’t stop the expedition in 2010, which was the largest by far. Around 300 people paddled on the river, 54 people completed the entire expedition, and hundreds more participated in the events on the riverbank.

Like many other events, the 2020 Grand River Expedition was cancelled due to the COVID-19 pandemic and participants’ safety and health despite the planning being almost complete. There was hope that the expedition would happen in 2021, but unfortunately, COVID is still prevalent. Instead, there will be a “Do It Yourself” adventure called the Grand River Experience (GREx).

The GREx is self-guided. You can plan your own activities either alongside or near the river and share your experiences online.

You can participate in

Anything! If it’s by the river, it counts as the GREx

To get more information, fill out the GREx contact form at https://app.getresponse.com/site2/gre2020?u=PtJY&webforms_id=BU4WY&fbclid=IwAR2oAsQB4Zn-FCsGNhR_FtWvthzSYO48c2BNmfWyRrfrxlA8dUImt85Dqb8

You can also keep checking the web page at https://www.mgrow.org/grand-river-expedition for activities and updates as the summer progresses. The first list of resources and activities will go live June 28th. The GREx will conclude on September 15th.

Sources of information and Further Reading

PrevPreviousWMEAC, along with other organizations, gives a tour of community stormwater management project to Representative Peter Meijer
NextSuccesses in Climate Activism in West MichiganNext